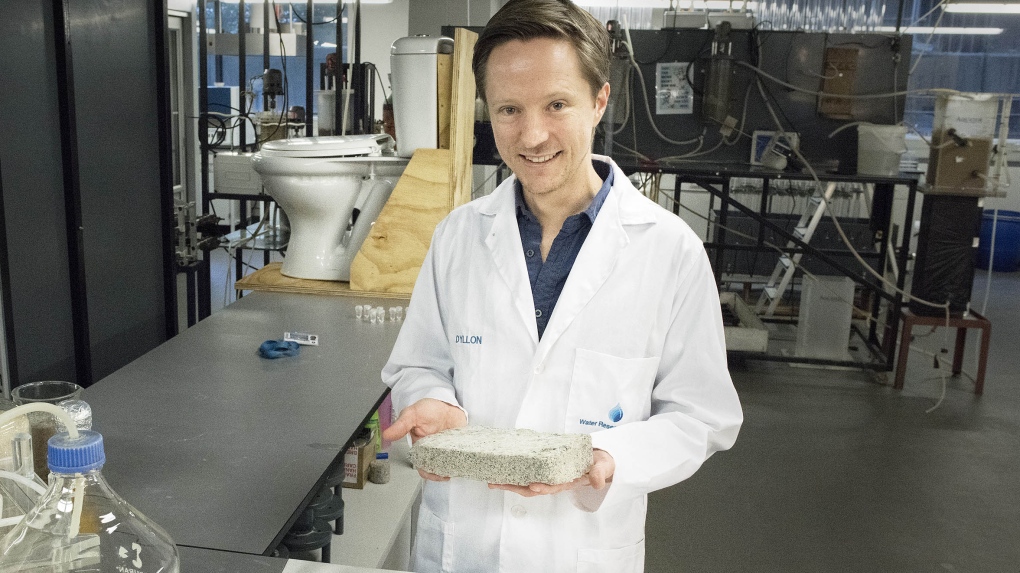 Dr Dyllon Randall, one of the developers of the world's first bio-brick which uses human urine as one of the binding components. (Rodger BOSCH / AFP)

One day, when nature calls, your urine could be put to better use than to be flushed down the toilet.

Instead it could be a key ingredient in the construction of a greener office or new home.

In one of the latest innovations in the search for eco-friendly building materials, South African university researchers have created bricks using human urine.

The first of their kind in the world, the bio-bricks hold out the prospect of a sustainable alternative to standard clay and concrete bricks, they hope.

The prototypes have been "grown" from urine using a technique somewhat similar to the natural formation of seashells, taking six to eight days to form.

The groundbreaking invention is the brainchild of two University of Cape Town students and a lecturer.

With a grant from a government-run Water Research Council, the feasibility study was launched last year using synthetic urea. And then the study escalated to using human urine.

"I was always curious to know why don't we use urine to do the same thing," Dyllon Randall, the lecturer who supervised one of the two students, told AFP.

A year later they successfully produced their first bio-brick in a laboratory.

Using a natural process known as microbial carbonate precipitation, they mix urine, sand and bacteria to make the brick.

The research is still in its early days. So far, it requires up to 30 litres (eight US gallons) of urine to make just one brick -- with the urine provided by male students at the university via a special urinal.

"We basically made the first bio-brick from real urine," Randall said.

"This process is amazing because essentially what we've done is we grew bricks at room temperature."

The first three bricks are on display. They are grey weighty blocks and indistinguishable from any standard limestone.

Suzanne Lambert, a civil engineering Masters student, marvels at how the team copied "nature's natural processes" to create a sustainable way of building.

"This process mimics the way coral is formed and the natural processes produce a cement," she said.

Conventional bricks or clay-fired bricks are manufactured in kilns, where they are dried at 1,400 degrees Celsius (2,500 degrees Fahrenheit), a process that causes large emissions of carbon dioxide.

In contrast, the bio-brick is "grown" through loose sand seeded with bacteria that produce an enzyme called urease.

The urease reacts with the urea in urine to produce a cement-like compound that bonds with the sand.

The product can be moulded into any shape and dries at ambient temperatures -- no ovens, no greenhouse-gas emissions.

"We take something that is considered a waste stream such as urine and use it in a completely sustainable process," said Randall.

And for those concerned about the odour of urine permeating from the walls, the good news is that the brick does not smell. The strong ammonia smell that comes from urine dissipates after a few days of drying.

Fellow researcher Vukheta Mukhari said the strength of the brick can be tailored to specific building requirements but the ones they have produced so far are "as strong as common bricks you find on the market".

Bio-bricks are already manufactured in the U.S., but they use synthetic forms of urine.

These, though, are the first to use natural human waste.

Will the bio-brick one day supplant standard clay or concrete counterparts?

The key factor is price, but at this very early stage of development there has been no attempt to research costs.

"We are still far from actually commercialising this as a full scale system," Randall cautioned, but said there was plenty of scope for gains in efficiency.

"At the moment we need between 20 to 30 litres to make one standard brick. That does sound like a lot, but remember that about 90 percent of urine is actually water," said Randall.

"We are looking at reducing the amount of urine we are requiring to make one brick, and I'm sure within the next few years will have much better results".