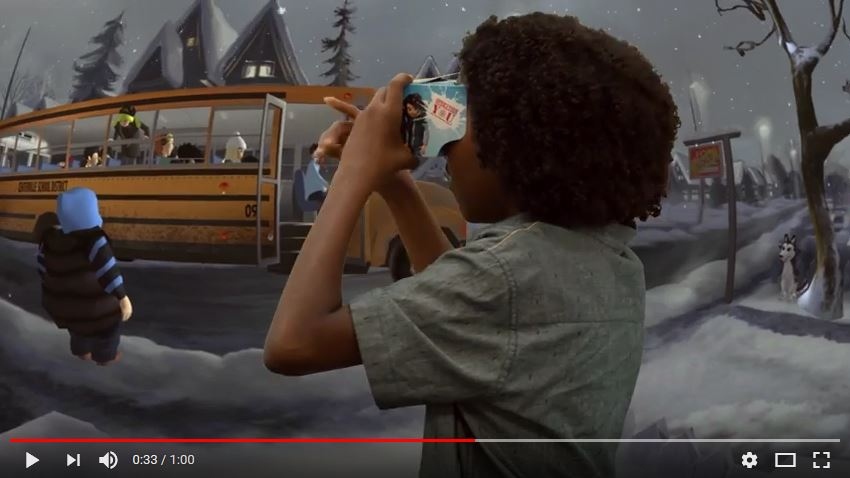 The publisher of a new virtual reality book series for kids is among exhibitors at the Consumer Electronics Show in Las Vegas this week, showing its approach to "next generation" storytelling.

The Quantum Storey Company launched its series, called Operation You, in select retailers in the U.S. late last year. The name is a nod to what the publisher calls the "self-directed action" offered by its books, which combine traditional print with augmented reality (AR) and virtual reality (AR) technologies.

As young readers turn the pages of the printed book, Ray -- a major character in the series -- invites them to download the free app (available for Android and iOS) and use the included VR goggles in order to be taken into the story. Once inside, they experience everything that happens in the first person -- dodge a snowball, find a seat on the bus, etc.

The first Operation You book is called "Morning Nightmare" and depicts the difficulties and pressures kids experience when boarding the school bus.

The series was launched with the goal of encouraging reading in a world of distraction -- "to get kids reading in ways native to them," wrote J.M. Haines, founder and CEO of The Quantum Storey Company and author of the Operation You series, on Medium. At the same time, the company claims that the books help kids build skills in a safe, virtual environment that they can then use while out navigating the real world.

For now, Operation You is available at Walmart and Sam's Club in the U.S., but while the publisher calls Operation You the "world's first virtual reality book series," it joins a number of international publishing ventures to incorporate elements of VR and AR into more traditional children's book formats.

Among recent offerings, Peronio, launched in 2016, is an interactive pop-up book for mobile devices that tells the story of a boy who can't decide what he wants to be when he grows up; AR technology allows it to display holographic images on a table, while virtual reality is used in its Google Cardboard and Gear VR versions. "Tara's Locket," meanwhile, a VR storybook by London-based design studio Big Motive that launched last year, allows kids to step inside a hand-illustrated world as they guide the young girl Tara through a magical landscape to reunite with her parents.