Volunteers gather to marvel at raptors along Alberta's 'eagle highway' 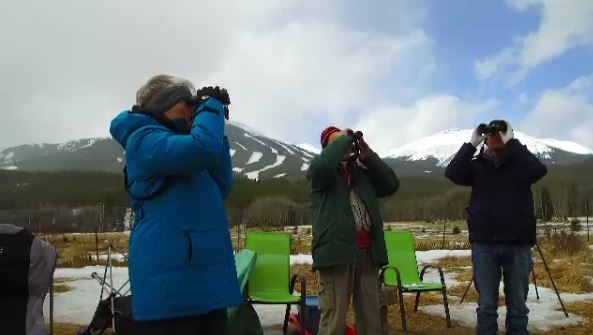 Bird researchers and watchers are gathering in Alberta to count rare Golden Eagles, as they make their way north along the “eagle highway” that hugs the eastern edge of the Rocky Mountains. These birds of prey are usually seen on their own and rarely seen in groups.

Cliff Hansen, from the Rocky Mountain Eagle Research Foundation, says the concentration of migrating eagles that passes through parts of B.C. and Alberta is unique on Earth. Such a concentration was unknown until the migration hotspot was discovered in 1992.

He explained that winds hit the mountains at a 90-degree angle it creates an updraft, allowing the Golden Eagles – with very broad wingspans -- to “ride the wave for many, many kilometres without expending any flapping energy.”

The birds are often barely visible to the naked eye, but volunteers gather each spring to count them as the migrate from the western U.S. to Yukon and Alaska. In October, people watch the southbound migration to winter habitats.

Caroline Lambert, one of people counting birds in Kananaskis County this season, said it’s “fantastic to be able to come out here and see so many eagles at once -- even though they are specks in the sky.”

Sometimes hundreds can be spotted in a single day near at the Kananaskis site, which is not far from Calgary. Thousands have been counted each spring and fall since the research began in 1992.

Hansen, who has been participating for two decades, said he still finds it exciting to see the giant raptors, whose wingspans can exceed two metres. The eagles, he said, are simply “majestic.”