Volcanoes on Mars could still be active, new study says 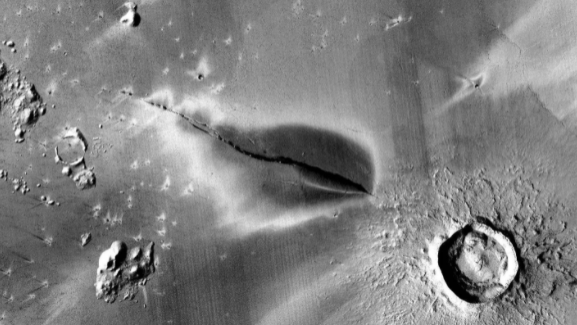 The recent explosive volcanic deposit around a fissure of the Cerberus Fossae system, in the Elysium Planitia region on Mars (NASA/JPL/MSSS/The Murray Lab)

TORONTO -- A new study by researchers at the University of Arizona’s Lunar and Planetary Laboratory and the Planetary Science Institute has observed that Mars could still be volcanically active.

The study, published in the journal Icarus, says evidence of recent volcanic activity on Mars shows that eruptions could have taken place in the past 50,000 years, raising the possibility of habitable conditions below the surface of the planet in recent history.

Most volcanic activity took place on Mars between three and four billion years ago, according to a press release, with smaller eruptions in isolated locations continuing as recently as three million years ago – but until now there was no evidence the red planet could still be volcanically active.

"This may be the youngest volcanic deposit yet documented on Mars," said lead study author David Horvath, in the release. "If we were to compress Mars' geologic history into a single day, this would have occurred in the very last second."

The deposit was “unlike anything else” found in the region, known as Elysium Planitia, and closely resembled features made from older eruptions on the moon and Mercury, according to the release.

The majority of volcanic activity in the Elysium Planitia region and elsewhere on Mars consists of lava flowing across the surface, similar to recent eruptions in Iceland. The site of the eruption is 1,600 kilometres from NASA’s InSight lander which has been studying seismic activity on the planet since 2018.

"The young age of this deposit absolutely raises the possibility that there could still be volcanic activity on Mars,” Horvath said, adding that a deposit like the one discovered “could have provided favorable conditions for microbial life fairly recently and raises the possibility of extant life in this region.”