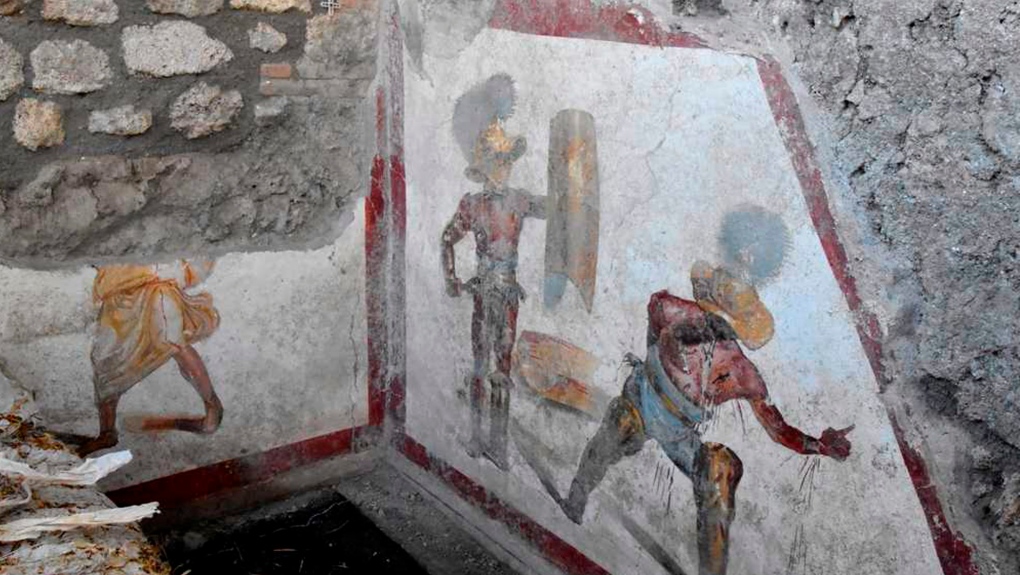 A view of a well-preserved fresco depicting fighting gladiators in the ancient Roman city of Pompeii, Italy, recently unearthed by archeologists. The new discovery -- located in the Regio V site, north of the archaeological park -- was unveiled on Friday and it's not open to the public yet. (Archeological Park of Pompeii via AP)

The striking scene in gold, blue and red was uncovered in what experts think was a tavern frequented by gladiators, who fought each other, prisoners and wild animals for the public's entertainment.

"We do not know how this fight ended. Gladiators were killed or shown mercy," Pompeii's director Massimo Osanna said.

A "Murmillo" fighter wearing a plumed, wide-brimmed helmet with visor, holds aloft his large rectangular shield in his left hand, as he grips his short sword in the right.

On the ground next to him lies the shield of the defeated "Thraex", who has suffered deep wounds and is on the point of collapse.

"What is particularly interesting is the extremely realistic representation of the wounds, such as the one on the wrist and chest of the unsuccessful gladiator, from which the blood runs, wetting his leggings," Osanna said.

"The Thraex is gesturing with his hand, possibly asking for mercy," he said.

The fresco -- which measures 1.12 metres by 1.5 metres -- was found in what excavators believe was a basement room, as the imprint of a wooden staircase can be seen above it.

Treasures of a ruined city

The building was situated not far from the gladiators' barracks in Regio V, an entire quarter of the site that has recently offered up several impressive archaeological finds but is yet to open to the public.

It was most likely a tavern with an upper floor of rooms used either by the innkeeper or by prostitutes, the ministry said.

The discovery was made during works to secure an area of the north of the archaeological park under the Great Pompeii Project, launched after years of bad maintenance and poor weather caused a series of wall collapses.

Culture Minister Dario Franceschini said the find showed Pompeii was "an inexhaustible mine of research and knowledge for the archaeologists of today and the future".

The ruined city in southern Italy is the second most visited tourist site in the country, after the Colosseum in Rome, with more than 3.6 million visitors in 2018.

Perhaps the most significant find at the Regio V so far has been an inscription uncovered last year that proves the city was destroyed by Mount Vesuvius after October 17, 79 AD and not on August 24 as previously thought.

The most eye-catching one, however, was the skeleton of a man in 2018 whose torso was found protruding from a large stone block which had crushed his head.

He appeared to have survived the initial eruption, and attempted to flee as volcanic ash blanketed the city, but was slowed down by a limp and was probably overcome by lethal gases, experts said.