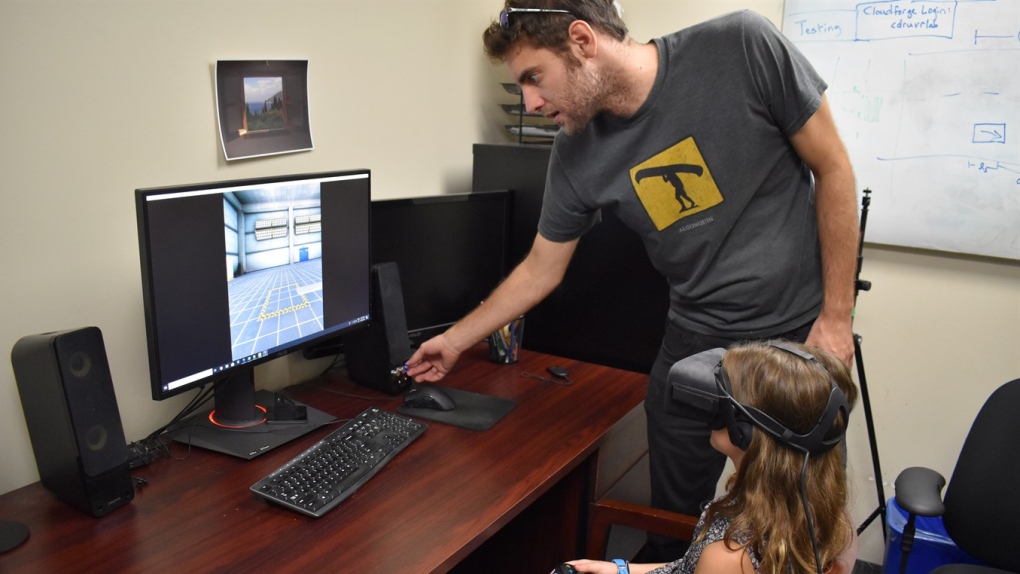 Andrew Vierich, a software developer at the University of Guelph, looks on as Ruby Corbett learns how to safely cross streets using a virtual reality program Vierich helped design in this undated handout photo. THE CANADIAN PRESS/HO - University of Guelph *MANDATORY CREDIT*

TORONTO -- With most kids heading back to school this week, many parents may be concerned about whether younger children are traffic-savvy enough to cross the street without supervision.

Can they judge how far away an approaching vehicle is? Or how fast it's travelling to make it across safely?

"Parents tend to overestimate their child's crossing ability," said Barbara Morrongiello, a psychologist at the University of Guelph, whose research focuses on childhood injury prevention.

"The parents tend to assume children are much more cautious than they are in fact."

So Morrongiello assembled a team of computer science students to design a program that teaches children how to cross the street using real-life scenarios -- all within a computerized virtual reality environment that allows them to learn and practice.

"In our system, the children are fully immersed in the pedestrian environment," she explained from Guelph, Ont. "So they basically wear 3D goggles and are actually in the environment, they're not observing the environment.

"We can see their reaction time and their attention because we code where they're looking and their speed of reaction.

"In our system, we have a very sequential learning strategy. So we start by selecting where you cross and then we talk about how to cross and when to cross."

The virtual reality program teaches the child by having them traverse a two-lane road where there's a blind curve or a hill, as well as what to do when crossing at a point between parked cars.

A pop-up character that acts as a coach reacts to the child's movements, saying for instance: "Oh, that was great" or "But you didn't look to the left, so let's practise that again."

"It was set up that way so the child can work independently," said Morrongiello, adding that the program can take an hour or two depending on the child's attention span.

"So it's a very tailored approach to learning. We try to make it so each child has a fun experience and wants to continue to play it."

In a study of 130 children aged seven to 10, those who were trained in street-crossing techniques using the program fared much better than a control group of kids who didn't get the virtual reality training.

Those assigned to take part in the VR program made 75 to 98 per cent fewer road-crossing errors following the test, compared to their untrained counterparts, said the researchers, whose study was recently published in the Journal of Pediatric Psychology.

One of kids who took part in the study when he was younger was Kaelan Rekker.

"It was really cool because it was my first time doing virtual reality," said Kaelan, now 11 and about to enter Grade 6.

"Yeah, I made a few mistakes at first," he admitted from his home in Guelph. "I got hit by a few cars.

"After that, then I was really focused on looking both ways before crossing the street ... (and) like looking for gaps between the cars and how fast they were going so that I could walk across."

His mother Kristen Rekker said she was more concerned about street-crossing skills when Kaelan, his twin sister Eden and their 13-year-old brother Dawson were younger.

But because of their different personality traits, Rekker was a bit more concerned about Kaelan, who "sometimes makes different decisions than the other two, who might be more careful at crossing the street."

"It's only in the past few years that they've been walking to school on their own and they've had to cross a rather busy intersection on their way to school."

The researchers designed the program to be inexpensive, requiring only the use of a computer, 3D goggles and a game-controller like that of an Xbox to operate the virtual reality environment.

"We're hoping to disseminate it broadly. It could go in a library, it could go in a school," said Morrongiello, noting that the program is not a money-making venture.

"We do it because we really are passionate about preventing childhood injuries."

With good reason: child pedestrian injuries are a leading cause of injury-related death among Canadian children aged 14 years or younger, according to Parachute Canada, an organization that promotes evidence-based solutions to avoid preventable injuries.

The Guelph researchers have already been contacted by a public health group in Israel and are in the process of translating the program into Hebrew, with a likely roll-out date in January.

Morrongiello said she welcomes inquiries from school boards, municipalities and other organizations both in Canada and abroad.

She won't name a specific age when kids are ready to learn to cross the street independently, as perceptual skills and brain development vary from child to child. But generally, she suggests starting when kids are aged seven or eight.

"We are very cautious in our training," Morrongiello said. "Even when these children succeed, we make them understand and their parents understand that it doesn't mean that they're now free to go and cross streets on their own.

"It means they have a better understanding going out our door than they did coming in. But that doesn't mean necessarily they're going to be able to handle any traffic situation or any unpredictable situation, like when they're late for school and in a hurry."