Venus isn't habitable and it could be all Jupiter's fault 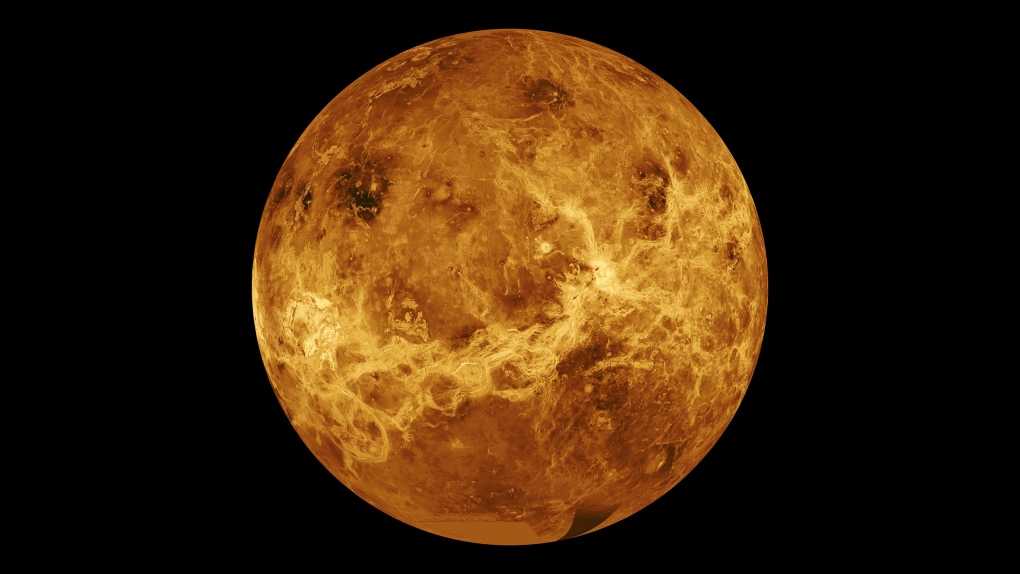 This global view of the surface of Venus is centered at 180 degrees east longitude. Magellan synthetic aperture radar mosaics from the first cycle of Magellan mapping are mapped onto a computer-simulated globe to create this image. (Jet Propulsion Laboratory-Caltech/NASA/CNN)

Venus was once a planet not too dissimilar to Earth, and if Jupiter hadn't altered its orbit around the sun, it might have been able to support life, according to researchers.

As a result of Jupiter -- the largest planet in our solar system -- moving closer and then away from the sun in its early formation, the planet's vast gravitational pull effectively killed off Venus' potentially Earth-like environment, the authors of a study published in the Planetary Science Journal found.

Venus is the second closest planet to the sun, and now has a surface temperature of about 880 degrees Fahrenheit (471 degrees Celsius) -- above the melting point of lead, according to NASA. This is hotter than Mercury, despite Mercury being closer to the sun.

Researchers from the University of California, Riverside (UCR) said that Jupiter's movement likely accelerated Venus' fate as an inhospitable planet.

"As Jupiter migrated, Venus would have gone through dramatic changes in climate, heating up then cooling off and increasingly losing its water into the atmosphere," said Stephen Kane, UCR astrobiologist, in a statement Wednesday.

"One of the interesting things about the Venus of today is that its orbit is almost perfectly circular," added Kane, who led the study.

"With this project, I wanted to explore whether the orbit has always been circular and if not, what are the implications of that?"

Researchers created a model of the solar system to learn how each planet's orbit affected each other.

A planet's orbit is measured between zero and one. The closer to zero, the more circular the orbit, whilst an orbit of one -- which is not circular at all -- wouldn't even be able to complete an orbit around a star and would instead launch into space, Kane said.

Researchers found that, when Jupiter was closer to the sun around a billion years ago, Venus had an orbit of 0.3, meaning that there was a higher probability that the planet was habitable.

However, as Jupiter migrated, it pushed Venus too close to the sun, where it would have undergone a dramatic change in climate, resulting in its current orbit being around 0.006 -- the most circular out of any planet.

Due to Jupiter's vast size, it has the ability to disturb the orbits of surrounding planets; it has a mass that is two-and-a-half-times greater than all of the other planets in the solar system combined.

Venus, which is named after the Roman goddess of love, is sometimes referred to as Earth's twin due to their similar size.

A study publish last year found that Venus likely maintained stable temperatures and hosted liquid water for billions of years before an event triggered drastic changes in the planet. Now, it is a mostly dead planet with a toxic atmosphere 90 times thicker than Earth's.

SEARCHING FOR SIGNS OF LIFE

A gas found on Earth that signifies life has also been detected in the atmosphere of Venus, according to new research published last month. The "entirely surprising" discovery of phosphine could hint at unknown processes occurring on Venus.

Kane believes it is possible that the gas could represent "the last surviving species on a planet that went through a dramatic change in its environment."

However, this is unlikely, he said, because those microbes would have needed to endure in Venus' sulfuric acid clouds for a billion years after the planet lost liquid water on its surface.

"There are probably a lot of other processes that could produce the gas that haven't yet been explored," Kane said.

But understanding how Venus shifted from potentially habitable to inhospitable is key.

"I focus on the differences between Venus and Earth, and what went wrong for Venus, so we can gain insight into how the Earth is habitable, and what we can do to shepherd this planet as best we can," Kane said.