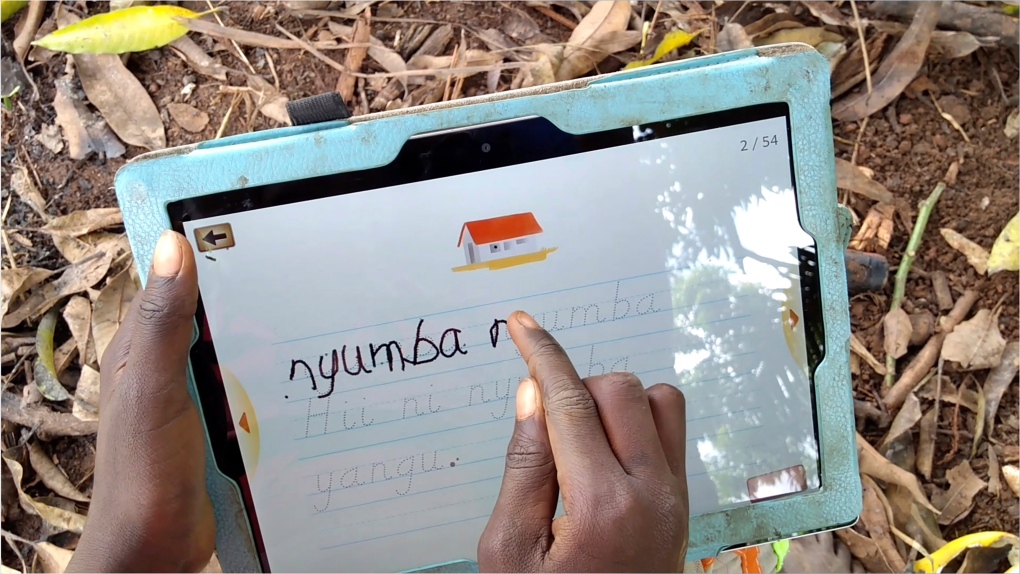 In this undated photo provided by XPRIZE, a child in a village in the Tanga region of Tanzania learns to write from a tablet using open-sourced software that would easily be downloaded by illiterate children to teach themselves to read. (Courtesy XPRIZE via AP)

LOS ANGELES -- A California company founded by game-developer parents who wanted to help their special-needs son is sharing a $10 million XPRIZE award with a London-based educational non-profit for programs created to teach illiterate children how to teach themselves to read.

The Berkeley-based Kitkit School and London's onebillion educational non-profit were declared co-winners of the XPRIZE For Global Learning at a presentation Wednesday night.

Nearly 200 teams from 40 countries entered the competition, jumping at the chance to become the latest winner of an XPRIZE, a coveted international award funded by future-looking entrepreneurs, billionaires and philanthropists who have banded together with the goal of making the world a better place through technology.

Elon Musk announced the winners at Wednesday's event honouring all five of the finalists. The total XPRIZE For Global Learning, funded by Musk, was worth $15 million, with each finalist getting $1 million just for making the final round. The winners additionally receive $5 million each.

The goal was to develop open-sourced software, put it on tablets donated by Google and have thousands of children in 170 remote villages in Tanzania test it. The five finalists, which also included teams from New York, Pittsburgh and Bangalore, India, spent 15 months refining the software.

They had to develop programs filled with games that could grab children's attention and then, like teachers do, use drawings, letters, numbers and sounds to teach them to teach themselves to read, write and do arithmetic.

The games would show children letters and pictures, allow them to trace letters themselves as they learned to write, and even read books to them.

When testing began, XPRIZE officials said only 2% of the children could read as much as a sentence in their native Swahili. Three-quarters had never attended school and many had to be shown how to swipe their finger across a tablet's screen just to power it up. But 15 months later, 30% of the children had acquired basic reading skills.

Representatives of both winning teams said the hardest part was developing software at their home bases, putting it on tablets and hoping the children would take to it and figure out how to use it.

"We had to learn fast and work closely with partners who were in East Africa," said Sooinn Lee, who co-founded Enuma Inc., the operator of Team Kitkit School, with her husband in 2012 and whose company produces the popular children's app Todo Math.

"It often felt like driving in the dark," she said.

Despite that, all five finalists developed functional, open-sourced software that will be put on the web so everybody can use it. Judges determined that the two winners simply did the best when it came to producing results.

That any of them succeeded likely came as a surprise to critics who didn't think it could be done when the XPRIZE Foundation announced plans for the Global Learning prize five years ago.

"All our experts said, 'Are you sure about this?"' recalled Emily Musil Church, XPRIZE's executive director of prize operations.

"Our specialty is making sure we frame the problem in a way that is audacious but at the same time achievable and really advances the field," said XPRIZE Foundation CEO Anousheh Ansari, who funded the first prize, for $10 million, in 1996 for private space flight.

The winning team of Microsoft co-founder Paul Allen and aviation pioneer Burt Rutan needed nearly a decade to accomplish that goal, but they created a new industry by sending their privately piloted SpaceShipOne into space in 2004.

Since then the XPRIZE Foundation has funded more than a dozen other prizes for those pursuing such innovations as making water for drought-stricken areas by heating air in shipping containers, creating sensors that allow people to track their health in real time and developing advanced ways to study ocean contamination.

The winners of the latest prize will now get to work putting their software into the hands of as many people as possible.

Lee said Kitkit's efforts will include adapting its software for smartphones, adding they are widely used in developing countries.

Onebillion wants to quickly begin distributing in multiple languages to reach as large a global audience as possible. More than 250 million children worldwide cannot read or write, according to the XPRIZE Foundation.

"This will be transformational for them, their communities and their countries," said onebillion's Judith Hermetter.