U.S. to return 3,500-year-old Gilgamesh Tablet to Iraq after looting 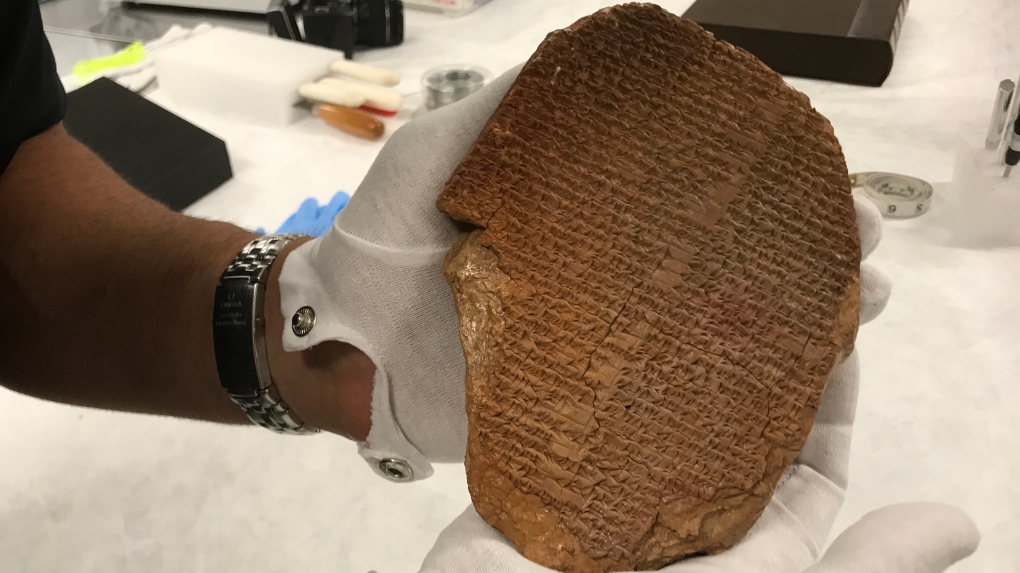 The Gilgamesh Dream Tablet is pictured after being seized by U.S. authorities. (U.S. Department of Homeland Security/UNESCO)

TORONTO -- A 3,500-year-old clay tablet that shows parts of a Sumerian poem from the Epic of Gilgamesh is being formally handed back to Iraq after it was stolen and eventually housed in a museum in the United States.

Known as the Gilgamesh Tablet or the Gilgamesh Dream Tablet, the artifact is believed to have been looted from a museum in Iraq amid conflict in the country in 1991, according to UNESCO.

The United Nations' cultural body said in a statement on Monday that the tablet "fraudulently" entered the U.S. in 2007 and was acquired by Christian arts and crafts retailer Hobby Lobby for display in its Museum of the Bible in 2014.

The tablet was seized by the U.S. Department of Justice in 2019.

In the statement, UNESCO called the return of the tablet to Iraq a "significant victory in the fight against the illicit trafficking of cultural objects," noting that theft and illicit trafficking of ancient artifacts continues to be a "key funding source for terrorist groups" and other organized crime groups.

"By returning these illegally acquired objects, the authorities here in the United States and in Iraq are allowing the Iraqi people to reconnect with a page in their history," said UNESCO Director-General Audrey Azoulay in the statement.

"This exceptional restitution is a major victory over those who mutilate heritage and then traffic it to finance violence and terrorism," she added.

The Gilgamesh Tablet is written in the language spoken by the Sumerians, which is the earliest known civilization of ancient Mesopotamia. This makes it one of the oldest known religious texts in history, according to UNESCO.

In addition to the tablet, UNESCO noted that the U.S. government has facilitated the "voluntary repatriation" of 17,000 artifacts to Iraq that were discovered to have been looted in recent decades.

The tablet will be formally returned Thursday during a ceremony at the Smithsonian Institution in Washington, D.C.