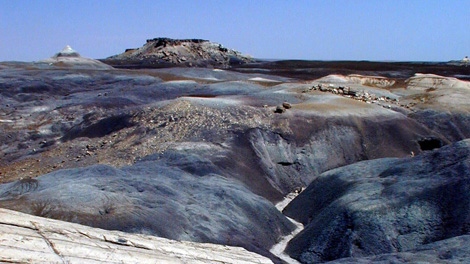 A species of peculiar burrowing reptiles that evaded scientists for more than 220 million years has been found, fossilized, at last. A team of National Park Service interns are credited with its discovery.

Hidden in a once-vibrant part of Arizona's Petrified Forest National Park, the burgeoning paleontologists unearthed fossils of the Skybalonyx skapter, an "anteater-like reptile" that probably predates dinosaurs, according to findings published this month in the Journal of Vertebrate Paleontology. It's a new species of a reptile previously thought to only live in trees.

The unusual Skybalonyx skapter belongs to the group Drepanosaur, often considered the ugly duckling of reptiles (perhaps partly because they bore some resemblance to fowl in life). The University of California Museum of Paleontology describes the creature's features as "seemingly drawn at random from evolution's spare parts box," with bird-like beaks and tails punctuated with a claw, almost too oddly fantastical to be real.

But the Skybalonyx skapter was real, and it lived in an area that was once overrun with life during the Triassic Period some 220 million years ago, Xavier Jenkins, a Idaho State University PhD student who was credited with the Skybalonyx's discovery, told CNN.

"It is genuinely so surprising that a site like Thunderstorm Ridge took this long to be discovered, and it's revealing a hidden diversity of ancient life at Petrified Forest," Jenkins said.

Jenkins' colleague, Virginia Tech graduate student Ben Kligman, literally stumbled into the area, which they dubbed "Thunderstorm Ridge," and found the small Skybalonyx fossils. In its prime, the area was likely a "swamp-like" environment with rivers and lakes that attracted species of all kinds -- including, it seems, the typically tree-dwelling drepanosaur.

The fossils Jenkins and his fellow interns found were so small that they had to "screen-wash" them, meaning they broke down the rocks with water through metal screens.

They named the species Skybalonyx skapter, which in Greek means "dung-claw digger." It's fitting since its bones were "quite literally found in a deposit of fossilized poop," Jenkins said, and its claws were once perfect for digging.

The team's analysis showed that unlike other drepanosaur species, which all share a large claw on their second finger, the Skybalonyx skapter's claw was much wider than those of other species. Other known drepanosaur species' claws were much more suitable for climbing and living in trees.

Claws that wide, Jenkins said, are seen today only in burrowing animals like echidnas, or spiny anteaters, and moles.

"Skybalonyx goes to show that prehistoric ecosystems, such as those at Petrified Forest National Park, were much more similar to the modern than previously thought, with animals climbing, burrowing, swimming and flying just like today," Jenkins said.

The discovery of Skybalonyx also suggests that Petrified Forest hosted far more life, and for far longer, than previous research expeditions suggest, Jenkins said. The park's swampy past also resembles ecosystems that survive today and host relatives of the drepanosaur.

"These prehistoric ecosystems are not as alien as once thought, and are ... eerily familiar in composition to those of today," Jenkins said.