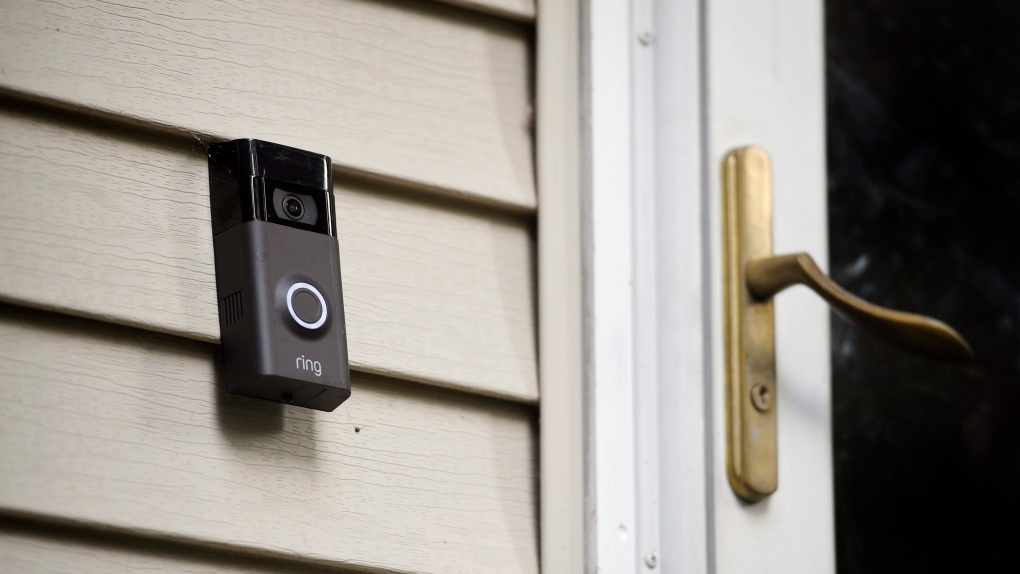 In this Tuesday, July 16, 2019, photo, a Ring doorbell camera is seen at a home in Wolcott, Conn. (AP Photo/Jessica Hill)

TORONTO -- A lawsuit filed by an Alabama man alleges that someone gained access to his Ring security camera and used the device’s two way-speaker system to harass his children.

In court documents filed Thursday, John Baker Orange says he bought the Amazon-owned internet-connected camera in July 2019 and installed it over his garage to “provide additional security” for his family.

Orange claims that there was a cybersecurity breach involving his three children, aged seven, nine and 10, when they were playing basketball on the driveway.

He alleges someone interacted with his kids over the speaker system, encouraging them to move closer to the camera.

The lawsuit, filed in federal court in California, claims that the camera systems are “fatally flawed.” It also states that the company does not offer two-factor authentication and only requires its users to use basic passwords when setting up the devices.

“Ring does not fulfill its core promise of providing privacy and security for its customers,” court documents read. “Ring failed to meet this most basic obligation by not ensuring its Wi-Fi enabled cameras were protected against cyberattack.”

Seven similar hacking incidents across the U.S. are referenced in the lawsuit.

In December, a Mississippi family released video of a chilling incident where someone hacked the Ring security camera set up in their children’s bedroom.

In the footage, an unknown man uses the speaker to harass the couple’s 8-year-old daughter.

In another incident in north Texas, someone hacked a family’s Ring camera and shouted profanities, racial slurs and threatened their young children.

In the court documents, the company says it takes the “security of its devices seriously”. Ring said the hacked cameras were accessed when “unauthorized third parties were able to login as authentic users with proper passwords.”

CTVNews.ca has reached out to Ring for comment about Orange’s lawsuit. The company has not yet responded.