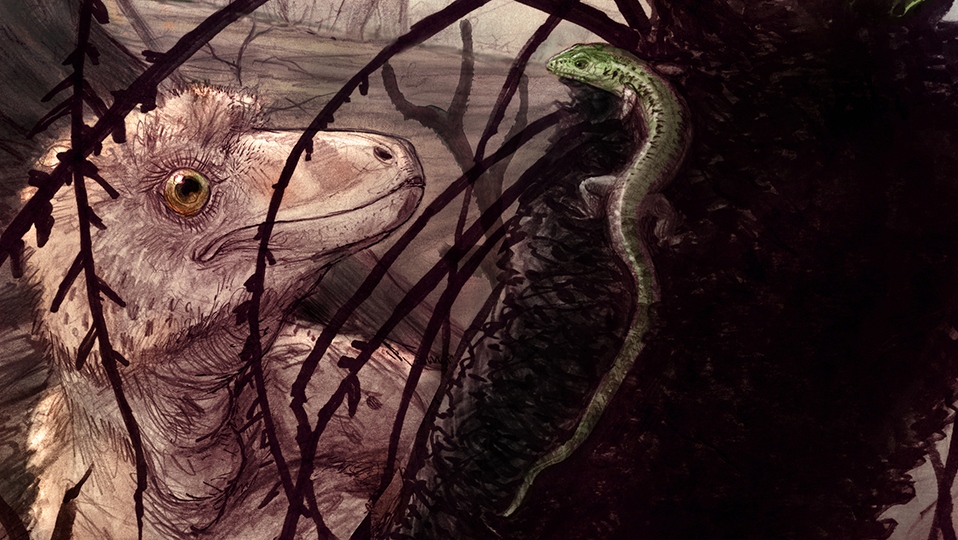 This illustration shows a baby Deinonychus investigating a Sciroseps pawhuskai on the charred remains of a cycad. (Brian Engh/dontmesswithdinosaurs.com)

TORONTO -- Two newly identified tiny species of fish and lizard that existed 100 million years ago have been detailed in a study.

A team of researchers published their work Thursday in the journal PeerJ, in which they describe a lizard named Sciroseps pawhuskai and a fish named Anomoeodus caddoi.

"The fish and lizard represent material, though small and fragmentary, that preserves enough detail to call them new species," Joseph Frederickson, a vertebrate paleontologist and co-author of the study, said in a news release. "The lizard jaw is specifically interesting because normally fossils are limited to small and broken bits, while the specimen we describe in this paper is most of a complete lower jaw."

The fossils were discovered in southwestern Arkansas at a site known as the Holly Creek Formation, an area that apparently once had a rich ecosystem.

"The Holly Creek Formation is interesting because few fossils have been described in publications, even though it has produced dinosaur fossils in the past," Frederickson said. "Formations like these help us better understand how the continent was connected and the diversity of animals alive during the Early Cretaceous Period."

The newly described species highlight the variety of fossils that have been found at the site, which includes those of dinosaurs, mammals, fish, amphibians and reptiles.

"I think this paper is a good reminder that the fossil record preserves many different animals, not just dinosaurs," he said. "This paper focuses heavily on the tiny organisms crawling or swimming at the feet of giant dinosaurs, which too often go undocumented because they can be difficult to study. However, often it's these small animals that tell us the most about the environment in which they lived."

Dinosaurs previously discovered at the site include at least one long-necked sauropod (likely Sauroposeidon), large theropods (including a juvenile Acrocanthosaurus), an ankylosaur (armored dinosaur), and the small kickboxing raptor known as Deinonychus.

A variety of very small fossils have also been uncovered, including remains of sharks, bony fish, frogs, lizards, turtles, crocodilians and mammals. Altogether these species paint a picture of the ecosystem that existed in the study area millions of years ago.