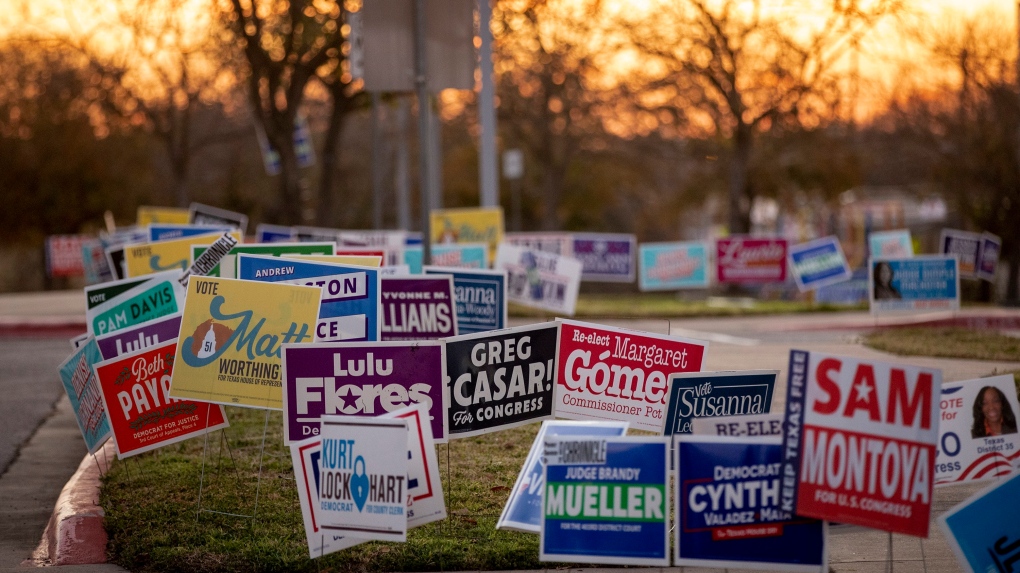 The sun rises over campaign signs at a polling location at the Carver Branch Library on Texas Primary Election Day on Tuesday March 1, 2022 in Austin, Texas. (Jay Janner/Austin American-Statesman via AP)

Twitter will revive features on the social media site to promote accurate information about the November U.S. midterm election and clamp down on false and misleading posts, the company said in a blog post on Thursday.

Civil rights and online misinformation experts have accused social media and tech platforms of not doing enough to prevent the spread of misinformation, including the idea that President Joe Biden did not win the 2020 election.

Twitter will apply its civic integrity policy, introduced in 2018, to the Nov. 8 midterms when all 435 seats in the U.S. House of Representatives are at stake and about a third of the 100 seats in the U.S. Senate.

The policy prohibits users from posting misleading content intended to dissuade people from voting and claims intended to undermine public confidence in an election, including false information about the outcome of an election.

Twitter permanently suspended Donald Trump from the service last year, citing the risk of "further incitement of violence" days after supporters of the then-president stormed the U.S. Capitol on Jan. 6, 2021.

The San Francisco-based company, which has sued billionaire Elon Musk to close his US$44-billion agreement to acquire the company, said it conducted tests to prevent misleading tweets from being recommended to other users through notifications.

The efforts to fight misinformation, like those during the 2020 presidential election, include information prompts in user timelines to "prebunk," that is to debunk falsehoods before they spread further online.

(Reporting by Sheila Dang in Dallas; Editing by Howard Goller)

As Russia's war in Ukraine enters a flammable, even more dangerous phase, analysis from the Associated Press on CTVNews.ca looks at whether a wider war is looming with devastating results for the world, perhaps not seen since 1939-1945.

Russia vetoed a UN resolution Friday that would have condemned its referendums in four Ukrainian regions as illegal, declared them invalid and urged all countries not to recognize any annexation of the territory claimed by Moscow.

Exposure to air pollution increases the risk of COVID-19 hospitalization by up to 30 per cent for fully vaccinated patients, according to a new study.