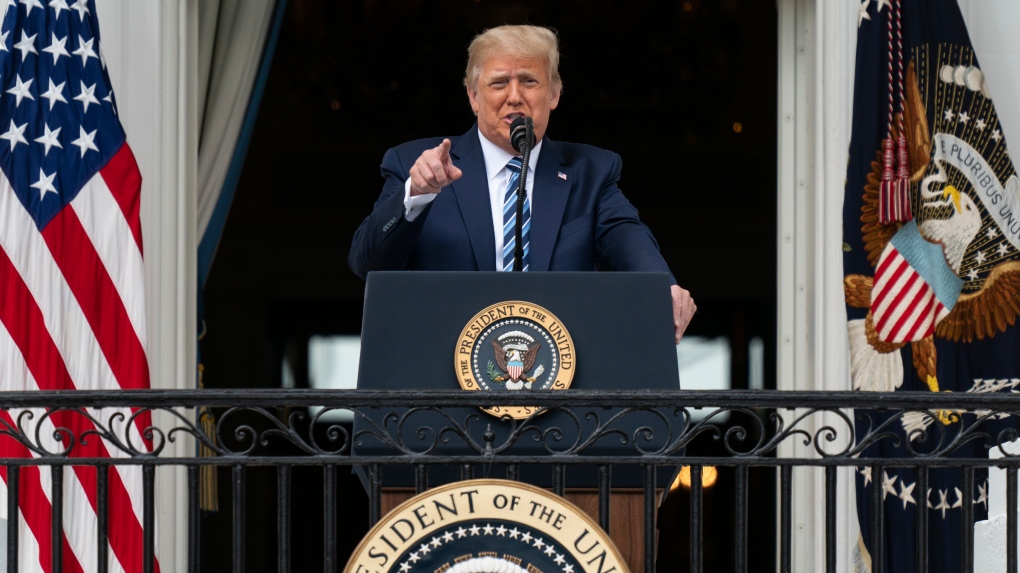 President Donald Trump speaks from the Blue Room Balcony of the White House to a crowd of supporters, Saturday, Oct. 10, 2020, in Washington. (AP Photo/Alex Brandon)

Twitter just added a warning label to a tweet from U.S. President Donald Trump that claimed, without evidence, he is immune to coronavirus after his physician cleared him to resume public activities.

"A total and complete sign off from White House Doctors yesterday. That means I can't get it (immune), and can't give it. Very nice to know!!!" Trump wrote on Twitter Sunday.

He also claimed immunity in an interview on Fox News where he said he believes he will be immune for "maybe a long time, maybe a short time, could be a lifetime."

There is no evidence that people are immune to coronavirus if they have been infected once, according to the Centers for Disease Control and Prevention. The CDC specifically cautions people not to assume they are immune.

"We placed a public interest notice on [President Trump's] Tweet for violating our COVID-19 Misleading Information Policy by making misleading health claims about COVID-19," a Twitter spokesperson said. "As is standard with this public interest notice, engagements with the Tweet will be significantly limited."

Trump posted the same message on his Facebook account, but the platform hasn't added a warning label despite the fact that it violates its rules. The post has been up for four hours and shared more than 24,000 times on Facebook.

Jason Shepherd, a scientist whose research is funded by Mark Zuckerberg's philanthropic organization, told CNN Sunday that Facebook should "absolutely" take action on Trump's post where he falsely claimed he was immune from the virus.

"Facebook simply needs to do better with misinformation. Especially Covid related where it can literally be life or death. They're too slow and I haven't seen any real change in policy since we sent our letter of concern to Mark [Zuckerberg]," said Shepherd, who works as an associate professor of neurobiology and biochemistry at the University of Utah.

Shepherd and other scientists who receive funding from the Chan Zuckerberg Initiative (named after Zuckerberg and his wife Priscilla Chan) sent a letter in June raising concerns about Facebook's handling of posts from Trump.

Twitter has added this warning label to Trump's tweets before. Last month, Twitter flagged a Trump tweet about voting twice. And last week, it added a warning to a Trump tweet that falsely claimed COVID-19 is less deadly than the seasonal flu.

Twitter is trying to persuade the public that it's ready for the election by rolling out new policies to rein in disinformation. The company announced Thursday that it's expanding its policies to fight voting-related misinformation. The new rules will likely force the platform to more aggressively fact-check President Donald Trump during the final months of the 2020 campaign.

Coronavirus can remain infectious on bank notes, other surfaces for weeks: study

U.S. sees 20 per cent more deaths than expected this year, most due to COVID-19, research finds