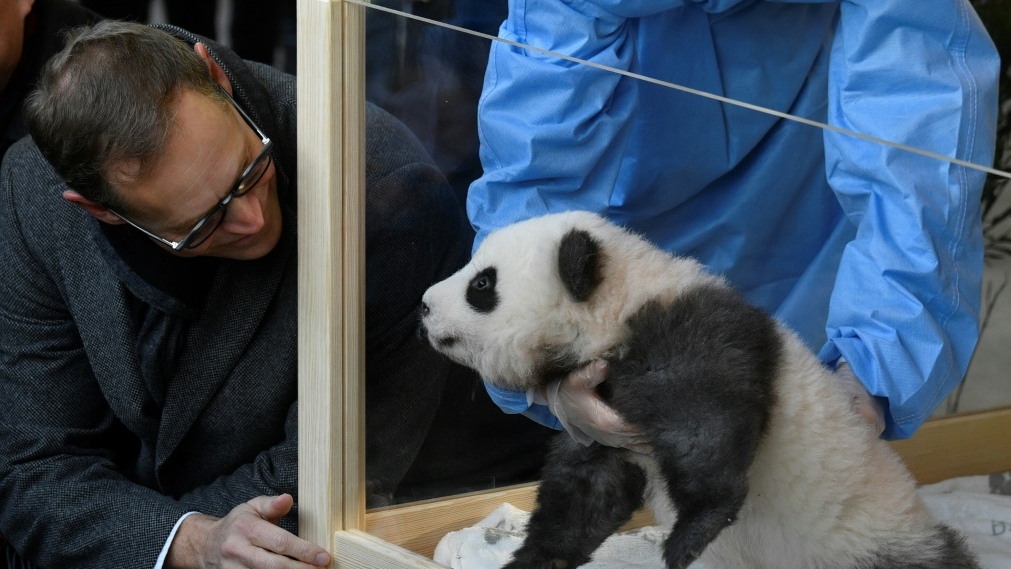 BERLIN, GERMANY -- The cuteness level at Berlin Zoo doubled on Monday when a pair of twin panda cubs made their public debut, with the zoo revealing the cuddly bundles of fur were both boys.

The little ones were born at the zoo on August 31 but in keeping with Chinese tradition they were only named after 100 days.

Speaking before a crowd of excited reporters at the Panda Garden, zoo director Andreas Knieriem announced that the cubs would go by the names of Meng Xiang, meaning "long-awaited dream" and Meng Yuan, or "dream come true."

The twins, weighing around six kilos (13 pounds) each, then made their long-awaited first appearance before the world's media.

Wheeled out in a glass-cased "panda bed," they were seen lounging close together on a heated mattress.

One of the cubs appeared half-asleep and unfazed by the attention, while his more active brother repeatedly turned his back on the press pack, prompting coos and laughter.

But the general public will have to wait a little longer for their own glimpse of the zoo's newest stars.

The cubs will be kept away from visitors "until they can walk properly" and are more familiar with their surroundings, Knieriem said, expected to be sometime in early 2020.

The birth of the cubs has delighted Berlin's oldest zoo as it is notoriously hard to breed pandas -- and twins are even rarer.

China lends pandas to zoos around the world -- a programme dubbed "panda diplomacy".

Berlin zoo pays US$15 million (13.5 million euros) for a 15-year contract to host the adult pandas, with most of the money going towards a conservation and breeding research program in China.

While the twin cubs were born in Berlin, they remain Chinese and must be returned to China within four years after they have been weaned.

Just over 400 pandas live in zoos around the world, in conservation projects set up with Beijing.

The species is considered "vulnerable" to extinction by the International Union for Conservation of Nature.