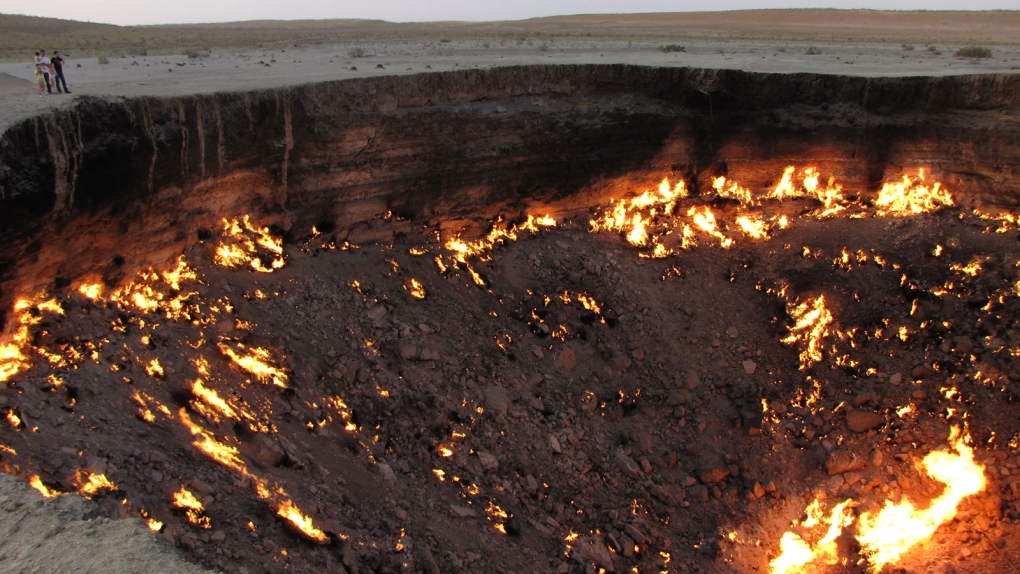 KARAKUM DESERT, Turkmenistan (AFP) -- Locals call it the Door to Hell, a giant burning pit that has spit out angry flames for more than 40 years, casting a yellow-orange glow into the evening sky.

"It takes your breath away," said Gozel Yazkulieva, a 34-year-old visitor from the Turkmenistan capital Ashgabat. "You immediately think of your sins and feel like praying."

Few foreigners have seen the crater in the heart of the Karakum, one of the world's largest deserts, although Turkmen authorities are hoping to change that as they seek ways to bolster tiny visitor numbers to the former Soviet republic.

Still one of the world's most isolated countries almost a quarter-century after the fall of the Soviet Union, Turkmenistan welcomes just 12,000 to 15,000 tourists from around 50 countries each year.

Tourism officials say the Door to Hell, also called the Derweze crater after a nearby village, could be developed into a key draw for adventure tourists.

"The burning crater... is attracting more and more interest every year, especially among foreign tourists," an official on Turkmenistan's state committee on tourism told AFP.

"The 'lifeless' desert could soon become a hugely interesting destination for different types of tourism -- from eco-tourism to extreme sports," he said.

The Karakum, or Black Sands, covers 80 per cent of the Central Asian republic. In summer, temperatures soar to more than 50 degrees C, while in winter they plunge to minus 20 C.

There are no road signs to the pit in a natural gas field some 270 kilometres north of the capital, but guides know where to turn onto a track leading to a fantastic view.

Flames dance out of cracks in its floor and around the sides, and a burning blast of air emanating from the pit shifts with the wind. The extreme heat and the roar of the flames have a mesmerising effect.

The phenomenon was the result of a simple miscalculation by Soviet scientists.

"Soviet geologists started drilling a borehole to prospect for gas at this spot in 1971," said Turkmen geologist Anatoly Bushmakin. "The boring equipment suddenly drilled through into an underground cavern, and a deep sinkhole formed. The equipment tumbled through but fortunately no one was killed."

"Fearing that the crater would emit poisonous gases, the scientists took the decision to set it alight, thinking that the gas would burn out quickly and this would cause the flames to go out," Bushmakin said.

But they never did, and now serve as a potent symbol of Turkmenistan's vast gas reserves, believed to be the fourth largest in the world.

Part of a nature reserve

Despite the obvious danger, the pit is not fenced off and those looking for extreme thrills can stand right on the edge. But this is very risky since the sandy soil often crumbles away.

"Foreign tourists who visit the burning crater feel mixed emotions -- awe at the sight but also at the profligacy of the Turkmen people, who have simply let the gas burn for so many years," said 40-year-old Begli Atayev, who works at a travel agency in Ashgabat.

"The main task of the new reserve is to preserve one of the largest deserts on the planet and solve its environmental problems," said Ovez Kurbanov of the National Institute of Deserts, Flora and Fauna.

The region's diversity of flora and fauna also made it ripe for scientific and eco-tourism, he added.

"Landmarks such as the burning crater are hugely interesting both to people who love to travel and to researchers in various areas," he added.

Travellers could go on safari in jeeps and quad bikes or ride camels along the shifting sand dunes of the Karakum, the state tourism official suggested.

"Our main task is to create an attractive image of Turkmenistan as a tourism destination," he said.