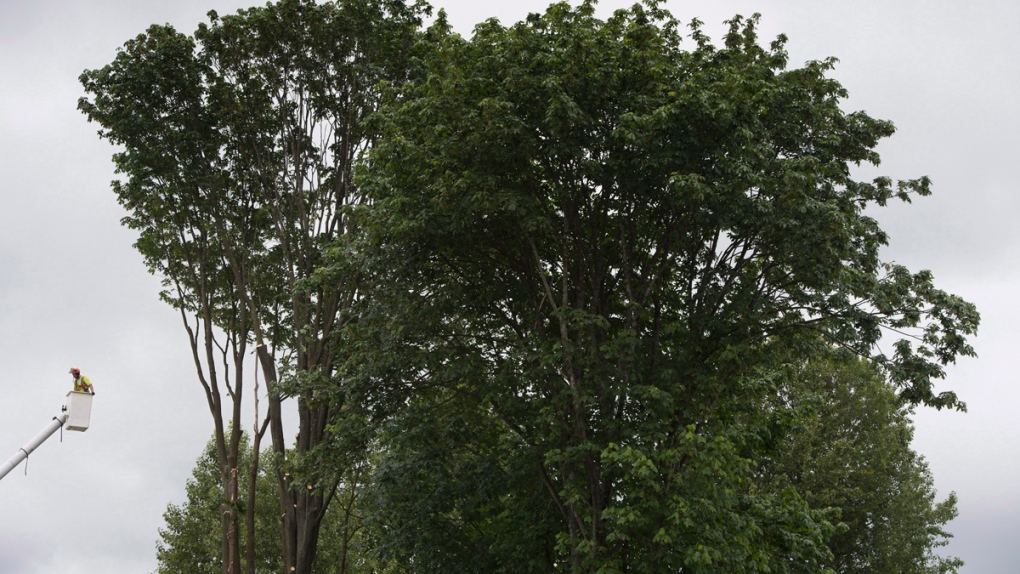 A tree trimmer is dwarfed by a giant tree as he positions his lift bucket in North Vancouver, B.C., Friday, June, 13, 2014. (Jonathan Hayward / THE CANADIAN PRESS)

British Columbia boasts 50 different tree species, including some of the biggest trees in the world. And while the location for many of the trees is already known, some believe the biggest trees are still out there waiting to be found.

That is why UBC's Faculty of Forestry is putting the newly acquired B.C. Big Tree Registry online. The project, which launched last week, enables anyone to nominate a tree to be listed in the database. After the tree is nominated, it needs to be verified by an expert before entering that database. Then tree lovers can use the database to pinpoint the locations of the large trees.

People began keeping records in the 1980s and the registry was established in 1986. Over the past 28 years it has moved around between different organizations before becoming property of UBC. But there were problems with the registry.

"It consisted of several bankers boxes of paper with a lot of information…But it wasn't something you could easily look at," UBC Forest and Conservation Sciences professor Sally Aitken told CTVNews.ca in a telephone interview from northern Alberta.

Previously only registered professional foresters could nominate a tree and the process involved printing off a form, filling it in and waiting for a committee to discuss the tree. That committee only met once a year.

Aitken got involved in 2012 and wanted to create "a project where we were harnessing citizen science." Over the past two years, she worked with the university and others to secure funding and launch the site.

Now nominating a tree is as easy as booking a plane ticket. Once nominated, someone will visit the tree to verify its size. Tree lovers can also search the database by species, view photos of the trees and find all of the big trees in a certain area using a Google-powered map.

"I think there is an emotional appeal," said Aitken. "They are huge organisms we can touch. Bigger than the biggest whales, which we can't hope to hug. The idea of living things that have been around for centuries or millennia appeals to us. They are biological legacies. "

She added that in doing research for this project she would often come across news articles about big trees and their connection to the community.

"The same few people have been nominating most of the trees in the registry, but there are two instances in the past few months where trees that were the largest in their species have been found," Aitken said. "The committee is convinced the largest trees may still be out there."

One of the trees found this year was the 69-metre tall coastal Douglas fir nicknamed Big Lonely Doug. The tree is 12 metres in circumference and is estimated to be about 1,000 years old. Doug is Canada’s second-largest Douglas fir and it stands alone among giant stumps in an area that was logged in 2012. This is what it looks like to climb the giant tree: