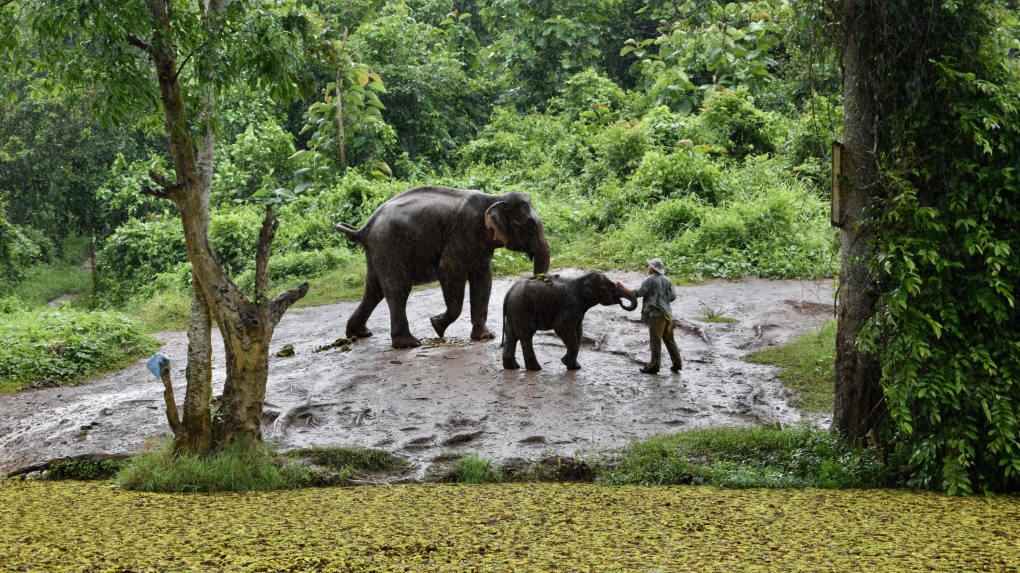 Highly respected conservation projects across the developing world have spent much of 2020 navigating the new reality of trying to protect wild animals while dealing with the fiscal fallout of COVID-19. (Mark Johanson / CNN)

Two decades ago, Rosa María Ruiz purchased 4,000 hectares of land along the Beni River, near the small village of Rurrenabaque, with the goal of transforming it from a heavily logged patch of the Bolivian Amazon into a thriving private wildlife reserve.

The Bolivian eco-warrior had just had success creating what the Wildlife Conservation Society believes is the most biodiverse protected area on the planet, the nearby Madidi National Park, but her vocal criticism of Madidi's protections under government control got her kicked out. Undeterred, she set up her own private park upriver and named it Serere after a gangly bird with a blue face and punk rock hair.

Fast-forward to early 2020, and Serere Eco-Reserve was home to more than 300 species of birds and some of South America's most elusive mammals, including dwarf leopards, night monkeys, jaguars, tapirs and giant anteaters. The revival of this small swath of the Amazon was made possible thanks to the support of foreign eco-tourists who paid around US$100 a day for all-inclusive overnight stays filled with hiking, conservation lessons and family-style meals sourced from the on-site garden.

Then, of course, the pandemic hit, and Serere hasn't welcomed a single visitor since March 23. With no incoming funds, and little in the way of savings, Ruiz had to cut staff from 40 to just seven rangers who've already chased off poachers and seen around seven acres of forest pillaged for lumber (a trend echoed across the Amazon Basin).

"We can't keep going at the rate we are now without further support," she says, noting a GoFundMe campaign created to tackle the emergency. "It's evident that if we don't have a presence and protection in Serere, especially because of the economic crisis everyone's living now, then those who are hard-up will continue cutting down the trees and selling lumber for easy money."

It's a predicament faced by highly respected conservation projects across the developing world, who have spent much of 2020 navigating the new reality of trying to protect wild animals while dealing with the fiscal fallout of COVID-19.

WILDLIFE TOURISM: AN INDUSTRY IN PERIL

In the early days of the pandemic, the internet was abuzz with stories of wild boars in Barcelona, pumas in the Chilean capital of Santiago and dolphins in Venice canals (the latter was viral fake news). Animals, it seemed, were thriving in the era of coronavirus lockdowns.

These "good news" stories of animals roaming freely were what we all craved at the time, but they overshadowed a more unfortunate reality.

Tourism has been the fragile pillar on which thousands of conservation projects stood for decades, helping to protect wild, trafficked and refugee animals, restore vital habitats and educate the public about sustainability. When that pillar crumbled overnight amid global travel bans, the system collapsed.

Wildlife reserves in the developing world are, unlike U.S. National Parks at the moment, empty. Contrary to popular belief, this is not a good thing for the animals.

Not only does the presence of eco-tourists keep poachers and loggers at bay, but at well-managed reserves, their money funds rangers, veterinary programs and animal rescue centers in parts of the globe that lack robust public park systems.

It also provides a vital source of revenue for rural and disenfranchised communities.

A 2019 estimate from the World Travel and Tourism Council (WTTC) put the direct value of wildlife tourism at US$120 billion. It generates 21.8 million global jobs and is particularly vital in Africa (where it makes up 36.3% of the travel and tourism sector), Latin America (where it's 8.6%) and Asia-Pacific (where it's 5.8%).

This income has virtually evaporated as a result of Covid-19, leaving the animals -- and those who care for and depend on them -- at risk.

The Elephant Conservation Center (ECC) is a 6,000-hectare reserve in northern Laos that cares for 34 rescued Asian elephants, helping them to reherd and, eventually, return to the wild. Laos has fewer than 400 wild elephants and about the same number in captivity, according to government estimates, making programs like this essential to tip the scale.

Some 85% of the ECC's revenue is derived from paid visitors and voluntourists, who spend around US$110 per day for multiday educational stays that involve no invasive riding or bathing with the animals.

Even though Laos so far has been largely spared by the coronavirus, with just 20 confirmed cases, tourism at the ECC is limited to a few expats and locals. Now, it's searching for donors and grant money to stay afloat, keep its 34 mahouts (elephant trainers) employed and carry out its greater mission of using elephants as a symbol to raise awareness for conserving regional habitats that house less-iconic endangered species.

"I was quite happy with the ECC's business model because we were sort of independent from donor money thanks to this income generated by tourists," explains founder Sebastien Duffillot. "Going back to begging for money isn't ideal as funds are not so easy to get these days and the tourism model was much more sustainable."

Africa has, arguably, been most affected by the sudden decline in ecotourism. Some 67 million tourists visited the continent in 2018, according the UN World Tourism Organization, with many enticed by the chance to go on a once-in-a-lifetime safari.

"Thanks to the pandemic, we are looking at massive numbers of people who are completely out of a job," says Soraya Shattuck, executive director of the Adventure Travel Conservation Fund (ATCF), a nonprofit that harnesses the travel community's environmental and cultural conservation efforts for maximum impact.

"Not only have hotels and lodges had to shut their doors, but think about the impact this has had on the ancillary people who are involved in these industries," she adds. "That means the cooks, the drivers, the hotel staff, the craft sellers, the rangers -- all these people that depend on visitors no longer have an income, and they may be the primary income-generator for their entire family."

Shattuck says that without extra eyeballs in the continent's parks, some communities have been drawn into poaching out of desperation. They're not necessarily targeting elephants and rhinos, she explains, but are setting up snares for other bushmeats they can either sell or use to feed their families.

The ATCF is trying to combat the issue with a campaign to fund rangers in hopes of keeping money flowing for those on the front lines of the environmental crisis.

THE SIGNS OF SILVER LININGS

A 2019 WTTC study found that the average time from impact to economic recovery following disease outbreaks is 19.4 months for the travel industry. That is, of course, just an estimate. If there is one thing certain about the current pandemic, it's that everything remains uncertain.

Yet, there are some signs of hope on the horizon.

China, the largest market for illegal wildlife products, has suspended wildlife trade and vowed to impose a permanent ban on the sale and consumption of wild animals (though this has yet to be finalized). Moreover, a recent Wildlife Justice Commission report found that the trade has been severely crippled by current travel restrictions.

Several travel brands, including luxury outfit andBeyond, are offering virtual safaris that keep guides paid and raise funds for community development projects, while others, such as Desert & Delta Safaris, are selling vouchers for future trips, a percentage of which goes directly toward urgent conservation initiatives in local communities living near wildlife.

Across the ecotourism industry, Shattuck says she's seen a rise in partial financial resource-sharing where companies will add a mandatory fee (per guest, per night) that goes directly to conservation efforts.

"The goal is to protect the communities that protect these natural habitats," she says. "So, if you had to cancel your $5,000 safari, you might have an extra $50 in your pocket today to make sure that when you go next year the place is still intact."

Governments have been so preoccupied by the human emergency of COVID-19 that there has been little investment in the natural emergency. Yet, the two are intrinsically linked.

Coronavirus is caused by zoonotic disease transmission, which occurs most often when wild animals come in close contact with each other and humans. There is the greatest likelihood of this at wildlife markets and in human-animal conflict such as poaching.

By protecting wild animals and their natural habitats, we might just protect ourselves from the next pandemic.