To save vanishing bee populations, Ottawa to tighten pesticide rules 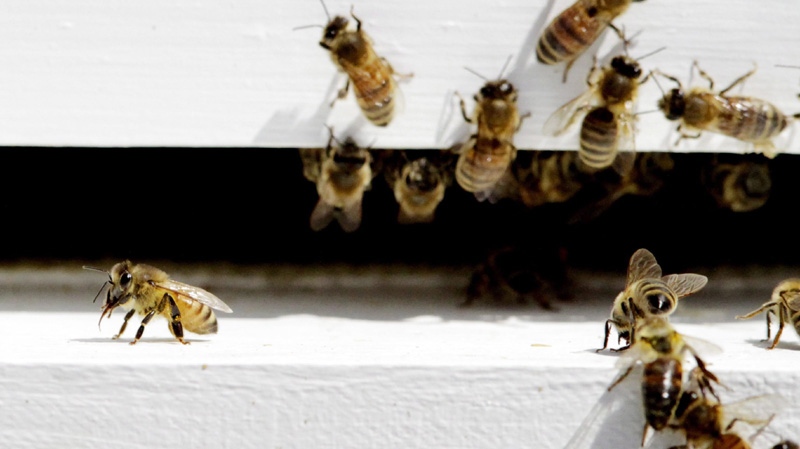 Health Canada's Pest Management Regulatory Agency is planning to introduce stricter rules, including new warning labels, for a class of commonly-used pesticides that are suspected of killing bees and other important pollinators. But some beekeepers and environmental groups say the new rules aren't enough.

In a notice of intent, PMRA said it is planning to introduce new protective measures for the 2014 planting season, after determining that exposure to neonicotinoid pesticides -- commonly used on corn and soy bean seeds-- is having a negative impact on the bee and pollinator population.

The agency said that after receiving a "significant number" of reports about bee deaths in 2012, and subsequent testing of dead bee samples, it determined that the majority of bee deaths in that year were caused by exposure to the pesticides -- likely through dust generated during the planting of seeds.

As a result, the agency plans to introduce new measures for next year including: safer planting practices, efforts to reduce dust during the planting process, new warning labels and updated information on the need to treat soy and corn seed with the pesticide.

“We have concluded that current agricultural practices related to the use of neonicotinoid treated corn and soybean seed are not sustainable,” the agency said in the notice of intent.

The agency said it is working with Agriculture and Agri-Foods Canada, provincial governments, growers, beekeepers and the pesticide industry to explore all its options.

It said it is also working with the U.S. Environmental Protection Agency to re-evaluate the use of the insecticide and is inviting public comments on the issue until Dec. 12, 2013.

Calls for a pesticide ban

Scientists, beekeepers and environmental groups have been concerned with the world's declining bee populations for years, with many pointing the finger at the use of the neonicotinoids.

The Canadian Honey Council estimates that Canada's bee population has dropped by approximately 35 per cent in the past three years.

Dave Schuit of Saugeen Country Honey in Elmwood, Ont., says he's lost half of his bee colonies in the past two years. He believes the pesticides are poisoning his bees and says a ban is the only way to save his business.

"We cannot continue. If they don't ban the neonicotinoids, to me it's a slap in my face," he told CTV Barrie.

"They're inadequate," he said Friday in a phone interview. "What we need is a ban. That's the only way (the bees) are going to have a chance to recover."

Bennett said that measures to make planting more safe won't help because neonicotinoids get into the water and the soil. "The problem is much greater than just the planting technique."

And as for labelling, "that's just a joke," he said, adding that practically all corn seed available to Canadian farmers have been treated with the pesticides.

He said he'd like to see Canada follow the European Union, which decided in May to ban the use of three types of neonicotinoid pesticides on crops that attract bees. The ban came after the European Food Safety Authority found that the pesticides pose "high acute risks" to the insects.

But there was not widespread consensus on the EU ban, with 15 member states supporting it, four states abstaining from voting and eight voting against it. Those who voted against it argued that the scientific evidence was incomplete and the pesticide ban could impact food production.

Bennett said he recognizes that banning the pesticide may result in lower crop yields, but says the risk of losing entire bee populations is far greater.

He suggests that the government take the pesticides out of use for two years and continue doing research on the topic.

"You have to remember that we didn't have neonicotinoids before about 12 years ago, and we produced a lot of corn in Ontario then."

Bees and pollinators play a critical role in food production. According to the UN Food and Agriculture Organization, of the 100 crop species that provide 90 per cent of the world's food, 71 are pollinated by bees.

"Your dinner plate would look a lot different without pollinators," he said.