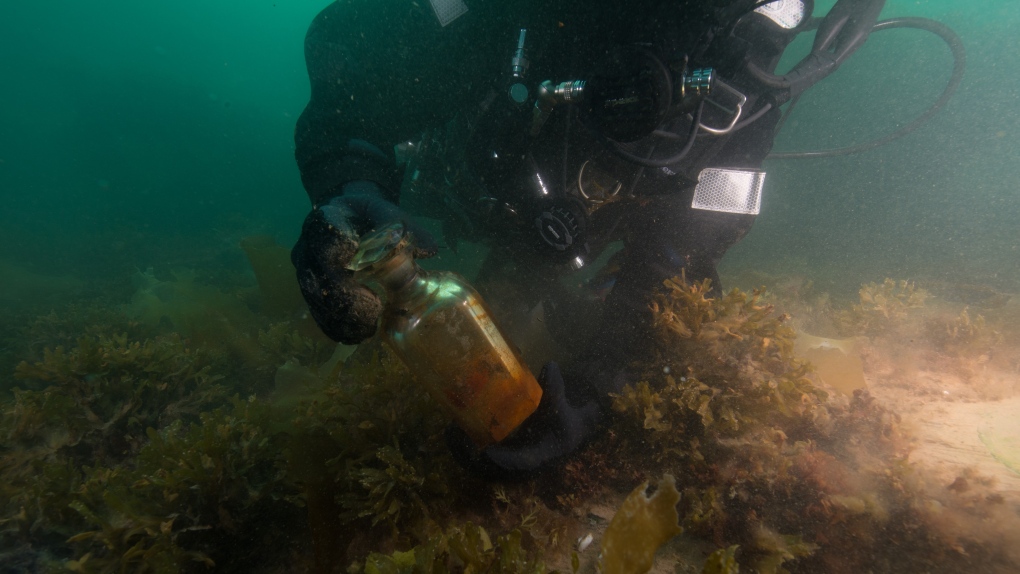 Parks Canada diver Brandy Lockhart picks up a decanter bottle recovered from the HMS Erebus during a dive in August of 2019 in this handout photo.THE CANADIAN PRESS/HO, Charles Dagneau, Parks Canada

It was as if the past literally reached out and touched him.

Parks Canada archaeologist Marc-Andre Bernier spent last summer diving into the wreck of the HMS Erebus, the flagship of the Franklin expedition, which sank about 1848 while searching for the Northwest Passage in the waters of what is now Nunavut.

That day, he and his colleagues swam into the pantry of Captain John Franklin.

There on a counter, under a coat of sediment, was a block of sealing wax, the mark of its London maker still legible. On the end, where you would snuff the flame after dripping closed a letter, was a thumbprint -- the lingering mark of an individual seaman, dead for 170 years.

"It's what the work of an archaeologist is about," said Bernier.

"We get to touch history and touch individuals. You're down there and you remove things, uncover the sediments, and they slowly appear. To see this unfold before your eyes, it is quite the charge."

The Erebus and its sister ship, the HMS Terror, set out from England in 1845. Franklin and his 129 men never returned. More than 30 expeditions tried to find them. A few artifacts, graves and horrible tales of cannibalism is all they uncovered.

But with a blend of Inuit oral history and systematic, high-tech surveys, the Erebus was found in 2014 and the Terror two years later.

In 2019, the team produced extraordinary images of the HMS Terror when they guided a robotic camera through its sunken passageways.

Last year, taking advantage of continued good weather and diving suits heated with hot water piped from the surface, the team was able to visit the Erebus for dives as long as three hours.

They focused on three rooms on the port side, seemingly untouched since they were abandoned.

"All three had areas where you would find things on shelves as they had been left," Bernier said.

Divers used an underwater vacuum to remove decades of silt, documented the precise location of any artifacts, then brought them to the surface. There, the items were cleaned further and catalogued by Jonathan Puqiqnak from the nearby community of Gjoa Haven.

Slowly, among 350 artifacts hauled to the surface, traces of individual lives began to emerge.

A hairbrush, hairs still in it. A toothbrush. A pair of epaulets in the bottom of a drawer. China plates stacked up like at an antique sale. Coffee beans. Pencils. Bits of an accordion. A bottle of what once held brandy or port, liquid still sloshing inside.

A lead stamp with the name of Franklin's steward, Edmund Hoar.

A wool mitt -- "you could put your hand into it and wear it tomorrow," Bernier said.

Intriguingly, objects belonging to sailors posted to Terror were found on Erebus.

"How come this is on board the Erebus?" asked archaeologist Ryan Harris. "Was he transferred? Did he die and the object (was) recovered?

"We don't know. But we can start in just one season to have that type of information to understand and link them to individuals, to try and tell personal stories and try to identify the movement of individuals."

Time may be running short. Since the Erebus was found, the team has noticed significant deterioration.

Parts of the deck are shifting and collapsing. Bernier, in dives to the wreck, has heard beams bumping into planks driven by large swells on the surface.

Erebus is in shallower water than Terror, and shrinking ice cover may no longer be protecting it from storms, which seem to be getting larger. One storm this season had three-metre swells -- large enough for the troughs to nearly expose the wreck.

"That's why there's this urgency," said Bernier. "We can see the changes."

Parks Canada's conservation lab is deciding which objects are in most urgent need of preservation or study. The hairs from the brush, for example, have been extracted and will go for DNA analysis.

Next year, the team plans to expand excavation into neighbouring cabins of the Erebus. They'll try to map the lower spaces on both wrecks. And there's always a return to the Terror, where officers' cabins are so well-preserved that Harris jokes the excavation will be more like housekeeping.

"Dusting the shelves and raising things to the surface."

Future plans for both ships will be decided between Parks Canada, the government of Nunavut and Inuit. Meanwhile, they are being guarded by local Inuit.

"It's going to be a challenge to apportion our time between these two amazing shipwrecks," Harris said.

"One thing we can say: if the ice and the weather co-operate, we fully expect next season to be even more productive."