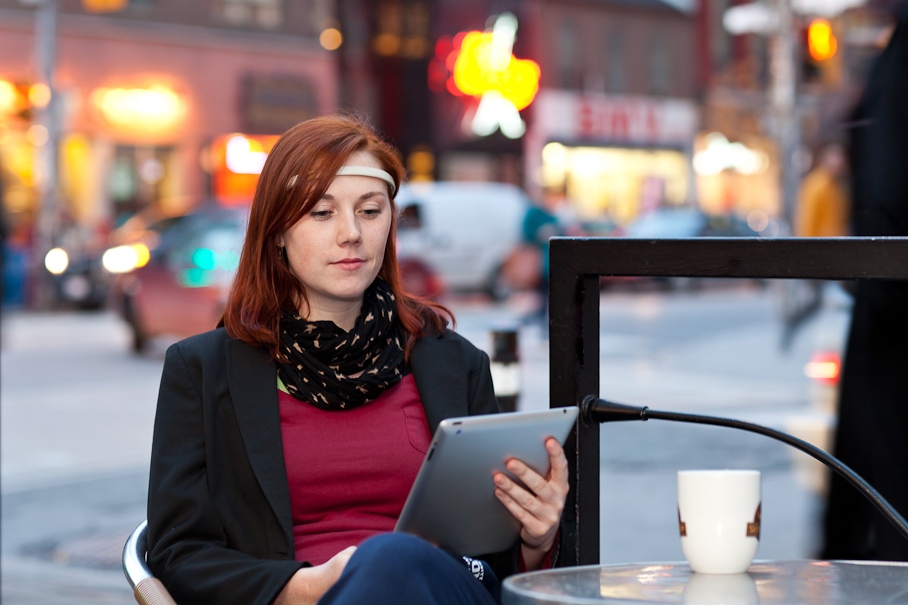 From thought-controlled beer taps to quantifying your emotional reaction to kittens, the latest creation by Toronto-based start-up InteraXon brings brain sensor technology to the masses.

Company co-founder and Chief Operating Officer Trevor Coleman equates the brainwave headband – called Muse – to a heart monitor for an athlete, except it’s the mind that’s getting the exercise.

“It’s about practising the skills of attention and meta-attention, which is the ability to be aware of what your attention is doing on a moment-to-moment basis and direct it where you want,” he said.

Sensors at the front and the sides of the headband gather information on how your brain is functioning through electroencephalography. The data is then transmitted to a smartphone or tablet and lets users know how well they were concentrating and when their attention started to drift.

The company has developed algorithms that indicate shifts in patterns, such as stress, focus and relaxation.

“You can maintain focus on what’s important in your life and not be pulled off course by distractions,” said Coleman, who holds a degree in cognitive science.

Within 10 years, the device should be able to let users control lights and the temperature in a room with their minds.

Before that, the next stage of the technology could make our emotions an open book, measuring our reactions.

“You’ll be able to share your feelings when you see a picture of a baby on the Internet, to show exactly how happy you were,” Coleman explained.

The company also envisions using the technology to track the emotional reaction to music, leading to MP3 players or apps that automatically create playlists based on emotional states.

A longer-term goal is the development of responsive technology -- apps that will signal to users that their focus begins to drift.

InteraXon has opened up the Muse platform to developers who can create an array of apps that work alongside the headbands.

“I’m looking forward to silly things,” said Coleman. “An app I would really like to build one day would be what I call a kitten app which would be designed to identify the exact brain wave signature of seeing a kitten.”

Coleman notes that the company has already received emails inquiring about using Muse to help those who’ve lost the ability to speak or move.

“Systems like that exist, but they’re all based around medical technology which costs thousands of dollars a unit,” he said. “Part of our philosophy is if we can make something for everyone and bring the cost down across the board it’s really going to unlock a whole new wave of potential applications for people who really need it.”

InteraXon turned to crowd-funding platform Indiegogo to help finance the technology. A $165 pledge provides funders with their very own Muse, which are expected ship mid-way through 2013.

The team, comprised of Colman, neuroscientist and fashion designer Ariel Garten and electrical engineer/competitive gymnast Chris Aimone, blew past its $150,000 goal and days after its deadline, had reached $287,472.

“Raising money from investors is one thing, but having ordinary people say, ‘Yes, I want this,’ and actually putting dollars behind that, it’s far more valuable,” said Coleman.

“Here’s a group of people that are as passionate and as excited about the technology as we are,” he continued. “We’ll be able to involve them in our decision-making process and take their feedback about which features they’d like to us to develop. That kind of real feedback from people who are going to use our product and really care about it is more valuable than any money we could raise.”