This NASA mission might create the first artificial meteor shower 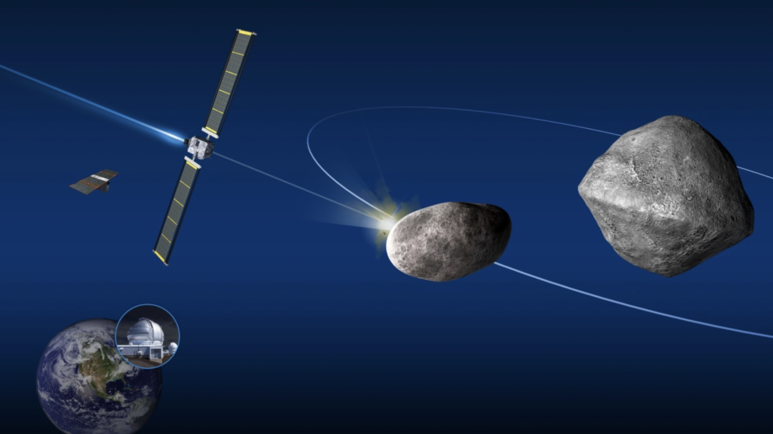 Schematic of the DART mission shows the impact on the moonlet of asteroid (65803) Didymos. Post-impact observations from Earth-based optical telescopes and planetary radar would, in turn, measure the change in the moonlet’s orbit about the parent body. (NASA/Johns Hopkins Applied Physics Lab)

TORONTO -- If a NASA test to protect us from asteroids goes to plan, the Earth might be seeing its very first artificial meteor shower in only a few years.

A paper published in The Planetary Science Journal in March theorized that after a NASA spacecraft slams into an asteroid in 2022, the impact will send debris shooting out into space.

And there’s a chance that the blast zone could include Earth.

“Envisioned as a planetary defense exercise, the project may also produce the first artificially generated meteoroids that reach Earth,” the paper states.

So, what exactly is this NASA project?

It’s hard to remember sometimes -- particularly when the Earth is embroiled in various crises within our own atmosphere -- but every human being lives on a massive spherical object constantly zooming through space at a mind-boggling speed, with other vast objects made of rock and ice speeding around and past us.

We may not need to protect ourselves from aliens yet, but that doesn’t mean we have no need for planetary defences. Asteroids have hit the Earth before and it could happen again.

That’s where the Double Asteroid Redirection Test (DART) comes in.

This NASA-led program is a test aimed at finding out if we can successfully deflect an object in space by essentially throwing a spacecraft into it to knock it off course.

DART’s target? The near-Earth asteroid, Didymos. Or, more specifically, a smaller asteroid — a “moonlet” nicknamed “Didymoon” — that is orbiting Didymos.

A moonlet is a particularly small natural satellite that is orbiting another object in space.

Didymos orbits the sun like the Earth does, and its main body is approximately 780 metres across (for reference, the CN Tower is 533 metres tall). Its moonlet is only 160 metres across, “which is more typical of the size of asteroids that could pose the most likely significant threat to Earth,” according to NASA’s website.

Didymos and its moonlet are not considered to be at risk of hitting the Earth, but their proximity makes them a good test subject.

DART is set to launch in 2021, currently aiming for late July. It will be launched from a SpaceX Falcon 9 rocket in California, and is going to cruise around in Earth’s orbit for about a year before it makes its move towards Didymoon. It is expected to intercept the two asteroids around late September or early October in 2022.

The DART spacecraft will hurtle into the moonlet at 6.6 km/s — which is around 23,700 km/h, almost 19 times faster than the speed of sound.

The two will collide when Didymos and its moonlet are within at least 11 million kilometres of the Earth.

The impact will slow the tiny asteroid by only a “fraction of one percent,” according to NASA’s website, but this will change Didymoon’s orbital period by several minutes. It doesn’t sound like a lot, but this change would be visible and measurable from Earth by telescope.

Upon impact, a crater will be made in the asteroid, and material will blast out into space.

According to the recent paper, most of the debris will collect in a meteoroid stream near Didymos, but depending on the speed of the debris shooting away from the impact, parts could escape the orbit of Didymos and make their way towards Earth.

The crater created by the impact is expected to be around 10 metres wide.

“Larger ejected masses and larger craters (even exceeding 100 metre diameter on the 163 metre diameter moon) are possible, though less likely, and the precise outcome depends on the unknown strength, porosity, and other physical properties of Didymoon,” the paper stated.

A second spacecraft, Hera, will be in the vicinity to observe the effects of the impact on the Didymos system. Hera is led by the European Space Agency (ESA), and may have to field the dangers of debris from the DART impact still moving through the Didymos system.

How long could it take for us to see the debris that does make it away from Didymos?

The paper modelled a few different possibilities for our artificial meteor shower, depending on time of impact and speed of debris.

In some scenarios, tiny pieces of asteroid could approach Earth within 15-30 days, but others could take more than two years.

One issue is that numerous man-made satellites orbit Earth, and could be at a risk of being struck by the debris. The paper pointed out that natural meteors have struck spacecraft such as ESA’s Gaia before.

Although the chances of any damage to satellites or orbiting telescopes as a result of the DART impact is extremely small, the paper explains that tracking the potential path of debris like this helps prepare us for the eventual possibility of near-Earth space being over-crowded with debris.

In a future potentially filled with asteroid-mining -- or more actions of planetary defence against asteroids -- humanity may need to learn how to deal with more debris in our orbit, or at least, how to protect future space missions against it.