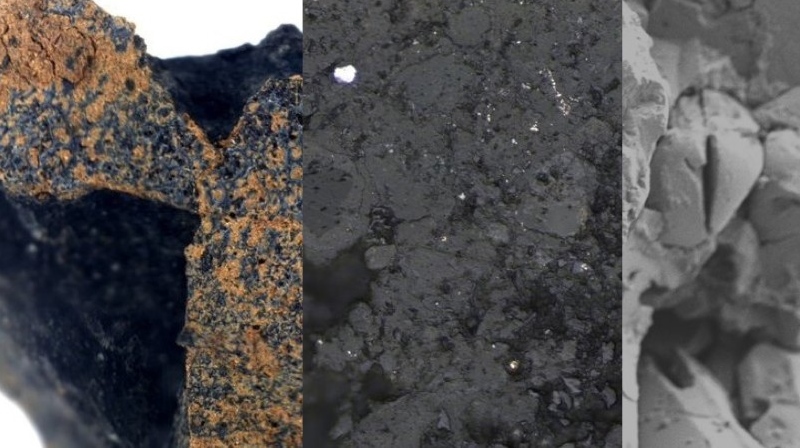 A 4.6 billion-year-old meteorite discovered this spring in the U.K. predates our solar system, researchers say, and may provide insights into how life on Earth came to be.

The tiny meteorite was found in a field in Gloucestershire, resting in a horseshoe impression. It was spotted by Derek Robson, director of astrochemistry at the East Anglian Astrophysical Research Organization (EAARO), who was out searching for fragments of a meteorite with a team of space researchers after a “bright yellow-green fireball” streaked through the skies at the end of February, according to a Facebook post from EAARO.

The team had received special permission to go search for meteorite fragments during a COVID-19 lockdown. Around a month after the fireball lit up the skies, a dark stone was spotted by Robson, shining with iridescence in the mud.

Robson and EAARO, along with scientists at the Loughborough University, are studying the rock, which is thought to have travelled a distance of more than 177 million kilometres to reach Earth from its original home in the asteroid belt between Mars and Jupiter.

But it’s not the distance that interests scientists — it’s the age of the meteorite, and the unusual substances that the meteorite contains.

This meteorite is thought to have existed before the planets of our solar system came together.

“It doesn’t appear to have undergone thermal metamorphism, which means it’s been sitting out there, past Mars, untouched, since before any of the planets were created, meaning we have the rare opportunity to examine a piece of our primordial past,” Shaun Fowler, a specialist in electron microscopy at the Loughborough Materials Characterisation Centre, said in a press release.

“It’s a scientific fairy-tale,” Sandie Dann, a professor at Loughborough University, said in the release. She has known Robson since 1997. “First your friend tracks a meteorite, then finds it and then gifts a bit of this extra-terrestrial material to you to analyze.

“At this stage, we have learned a good deal about it, but we’ve barely scratched the surface.”

“Carbonaceous chondrites contain organic compounds including amino acids, which are found in all living things,” Robson said in the release.

“Being able to identify and confirm the presence of such compounds from a material that existed before the Earth was born would be an important step towards understanding how life began.”

Fowler said that the majority of the meteorite is made up of minerals “such as olivine and phylloscilicates” as well as round grains commonly found in chondrites called chondrules.

“But the composition is different to anything you would find here on Earth and potentially unlike any other meteorites we’ve found – possibly containing some previously unknown chemistry or physical structure never before seen in other recorded meteorite samples,” he added.

If the organic compounds in the meteorite could be identified and studied further, it may add credence to the theory that meteorites brought key amino acids to Earth’s surface during its early days, adding the building blocks of life to Earth’s “primordial soup.”

Jason Williams, managing director of EAARO and a member of the team that went searching for the meteorite, said in the Facebook post that it is important to analyze meteorite samples as soon as possible when they have “volatile organic compounds.”

“While curating the meteorite fragments we noticed they exhibited a strong odour which we believe indicates the presence of volatile organic substances that may provide an exciting insight into the origin of this material and the early solar system,” he said.

The University of Sheffield, as well as overseas specialists, will also be helping EAARO in analyzing the meteorite, working to uncover the secrets this ancient piece of our solar system may contain.

What is the Canada-U.S. Safe Third Country Agreement?

The Supreme Court of Canada is set to hear a case brought by several human rights organizations seeking to overturn Canada-U.S. Safe Third Country Agreement. CTVNews.ca breaks down what the agreement entails.