This is how the Robopocalypse starts 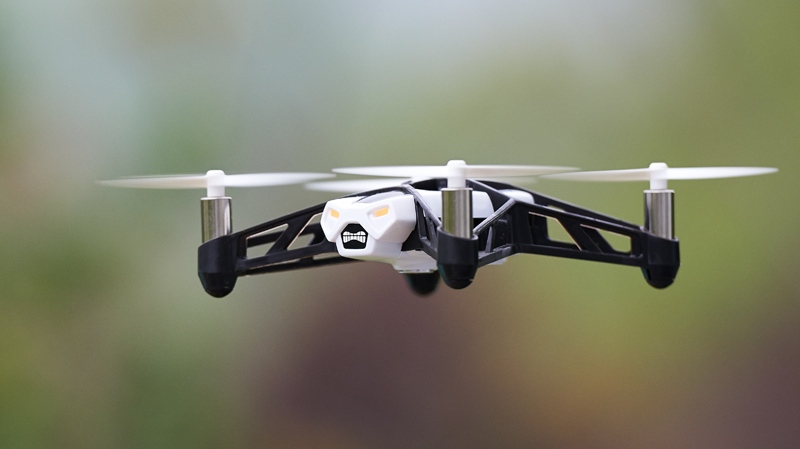 The Rolling Spider is a $119 miniature quad-rotor flying vehicle that fits in the palm of your hand. (Parrot Photo)

TORONTO – Earlier this week, at an exclusive event in downtown Toronto, members of the press were invited to the official launch of two new robotic products from Parrot S.A.

The company has had enormous success with its AR.Drone (now in its second generation), having sold more than 700,000 of the $350 devices since 2010. And though there has been an explosion of growth in the drone market, both in the high-end commercial segment and the budget-friendly toy segment, Parrot has maintained a decisive lead by combining high-quality components and engineering with easy-to-master controls thanks to its use of Wi-Fi equipped smartphones and tablets as the “remote.”

Parrot’s two new products, part of a line they call “MiniDrones,” follow in the footsteps of the AR.Drone.

The Rolling Spider is a $119 miniature quad-rotor flying vehicle that fits in the palm of your hand.

Equipped with detachable wheels that give the Spider an angry-bee-trapped-in-a-hamster-wheel appearance, it can roll along floors, up walls and along ceilings without any danger of the tiny propellers coming in contact with nearby objects.

Thanks to a plethora of on-board sensors and gyros, the Rolling Spider is simple enough for a child to operate. It even has a high-res, downward-facing camera that can snap still images during flights. The rechargeable and replaceable battery is good for about 8 minutes of continuous flight. You can fly the Rolling Spider indoors or outside, but because it’s connected via Bluetooth to your phone or tablet, the operational range is limited to about 66 feet.

In practice, the Rolling Spider is a hoot to fly. Amazingly stable yet highly responsive, it emits a high-pitched whine that makes a comparisons to bees, wasps or even mosquitoes more apt than to a spider. Horizontal flight is buttery-smooth while vertical lifts and drops happen incredibly fast. Irritated by a pilot who decides to fly it too close to your head? Go ahead and swat the Spider out of your way – it will right itself and continue on its flight path as though nothing had happened. We can only assume it doesn’t take such acts of aggression personally.

Parrot uses the same flight control scheme from the AR.Drone with the Rolling Spider and it is truly easy enough to learn that you can fly the Spider confidently after a few minutes of experimentation. Getting the Spider to execute and aerobatic 360 degree flip in mid-air requires nothing more than a double-tap on the smartphone’s screen.

Finally, if you can bear to separate yourself long enough from the Rolling Spider to let your kids play with it, they’ll be delighted to find that Parrot has included a set of stickers that can be used to customize the Spider’s appearance. Most of them make the Rolling Spider look like something that’s about to bite you.

Their second product in the MiniDrone line is the $179 Jumping Sumo. A quirky blend of remote-controlled car, mobile camera platform and, well, grasshopper, this two-wheeled vehicle has more in common with a Segway scooter than a garden-variety RC car. Equipped with a wide-angle front-facing camera, the Sumo can stream live video of everything it sees back to the smartphone, giving its driver a first-person perspective. The diminutive vehicle can be driven manually, using the on-screen controls and can perform impressive maneouvres such as 90 or 180-degree turns in an instant, or you can pre-program a specific route which can then be executed at the tap of the screen.

But the Jumping Sumo’s most impressive trick is, as its name suggests, the ability to jump up to three feet into the air, with a level of precision that allows experienced drivers to land it on a surface not much larger than the Sumo’s own footprint. The jumps are accomplished via a powerful, spring-loaded piston that can be primed and released in less than two seconds.

Flip the Jumping Sumo “upside down” (a hard position to identify when dealing with a robot that doesn’t seem to care which way is up) and it can use the same mechanism to launch itself away from fixed objects, or “kick” loose objects out of its path. In an impressive demonstration of strength, I watched as a Parrot employee put a sizable dent in an empty pop can using this technique.

As frightening as it sounds, Parrot has even equipped the Jumping Sumo with a “personality.” With a Furby-like set of responses, the Sumo will emit different sounds under different conditions. Perhaps most disturbing is the language Parrot uses to describe these interactions in its marketing material: “Pet its head, pat its body and it reacts to make you understand its affection for you.” Hmm. “Make you understand”… is this merely an awkward translation from French, Parrot’s native tongue, or is it a sign that we are no longer the ones who are in control? If you still have any doubts, consider this: When the Jumping Sumo finds itself in an “uncomfortable” situation, its “eyes” turn from placid green to a menacing red. Stanley Kubrick tried to warn us about artificial intelligence with red eyes…

While it’s clear that these two MiniDrones—which go on sale in August—are very much designed to be toys (parents get ready for the holiday wishlist onslaught), make no mistake, these are highly sophisticated pieces of technology that have more in common with commercial and even military drone applications than their size and price would indicate. With the exception of their operating distances, battery life and perhaps durability, these two “toys” represent cutting-edge technology.

If you’ve ever spent time wondering what your kids will be equipped to do when they enter the job market, perhaps it’s time to introduce them to a Minidrone. It could set them up for an upwardly mobile career path in our increasingly robotic world.