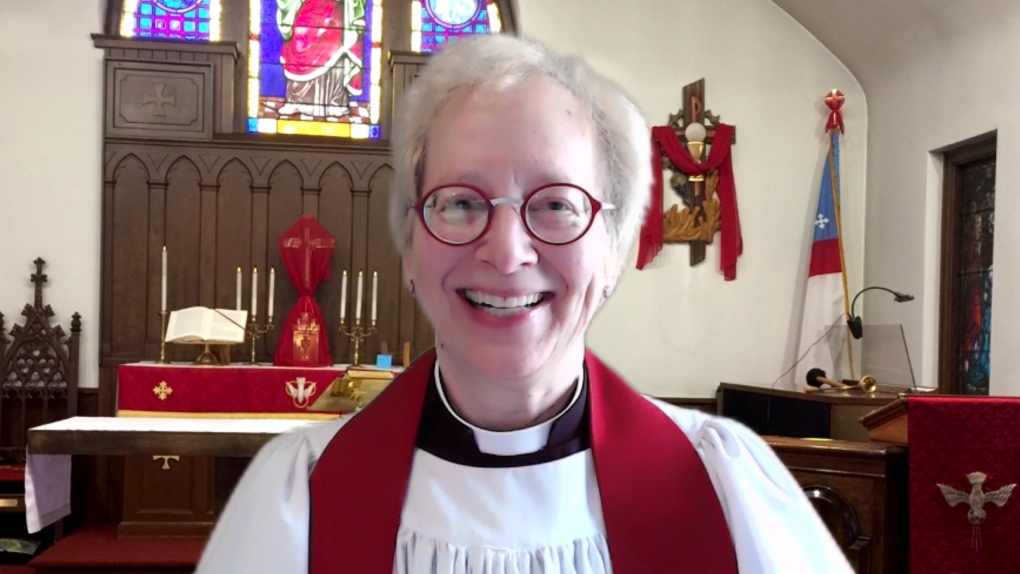 Rev. Pamela Conrad is rector of an Episcopal church in Maryland and a NASA scientist focused on Mars. (Courtesy of Pamela Gales Conrad)

By night, and at odd moments during the day, Conrad moonlights as a research scientist at the Carnegie Institution of Science in Washington, D.C. A member of the tactical operations team for the Mars Perseverance rover mission, she is a co-investigator for two scientific instrument suites, acquiring and analyzing data, and collaborating in team planning, with colleagues at NASA's Jet Propulsion Laboratory in Pasadena, California, and other scientific institutions around the country.

By day, the 68-year-old is an Episcopalian priest, leading a congregation at St. Alban's Episcopal Church, in Glen Burnie, Maryland.

It has long been received wisdom that science and the humanities, to say nothing of science and religion, are mutually incomprehensible domains that look at entirely different problems. That idea has been crumbling in recent years, when academic specializations have given way to interdisciplinary approaches.

Trained as a geologist, among other disciplines, Conrad has different ideas.

"There's no clash between science and religion," she said. "Both investigate the wonder of the world and our place in it."

OF ROCKS AND PEOPLE

This crossing of disciplinary lines hasn't been easy, at least not for the pioneers, who had to overcome lots of institutional resistance.

"The academic system forces students to be either scientists or humanists. It doesn't recognize that the same spirit and some of the same techniques underlie both art and science," graphic designer and computer scientist John Maeda, a former MIT Media Lab professor, once told me.

"Our goal should be to produce Renaissance people who take a cross-disciplinary approach to problems, da Vincian people who are interested in everything and can do everything."

"I studied everything," Conrad said. A quick look at her credentials reveals just that da Vincian person of whom Maeda spoke.

She earned all her degrees at George Washington University in the US capital, starting as a music major who, along the way, discovered geology and was smitten. She took lots of science courses her first year and a half before closing in on a bachelor's degree in music in 1974, then added a master's degree in music composition — she was contemplating a career as an opera singer — in 1987. She returned to science to complete a doctorate in geology in 1998.

Underlying that "terminal" degree was an interest in how life formed in unpromising situations, such as thermal vents deep down on the ocean floor. Thanks to one of those right-place, right-time moments, as she recounts, she chanced to meet the renowned director James Cameron, who had taken the proceeds from films such as "Titanic" and built a submersible research vessel. Thanks to deep-sea footage Cameron shot for a 3D IMAX film, footage that he later put to work in the science-fiction feature "Avatar," Conrad was able to study thermal vents in more detail than any researcher had seen to date.

The year after she earned her doctorate, NASA — looking for scientists to work on geobiological aspects of the Curiosity rover — hired her as a contractor at the Jet Propulsion Laboratory, managed by the California Institute of Technology.

"We are trying to understand if the processes that allowed life to develop and flourish on Earth ever occurred on Mars. If they did, we want to know if life appeared — and, if not, then why not?" she told an interviewer from her alumni magazine recently. It's a question whose answer she pursues as actively today as she did on first being hired in 1999.

The first experiments she helped design weren't selected — as she explains it, there is a stiff but collegial rivalry among NASA researchers to get their equipment on what is, after all, a pretty small craft. Still, she kept at it. Conrad transitioned from her role at JPL in 2010 and served as a full-time civil servant scientist at NASA's Goddard Space Flight Center in Greenbelt, Maryland, until 2017. As the deputy principal investigator for sample analysis at Mars, she worked on the Curiosity rover mission and other projects while refining the questions she would later explore.

It wasn't until much later in her life that Conrad turned to the study of religion. After experiencing an epiphany on a wind-blasted day during a work trip to Antarctica, she rejoined the Episcopalian Church of her youth, then entered the Episcopal Divinity School in Cambridge, Massachusetts.

She completed a master's degree in divinity in 2017, just as the school became affiliated with Union Theological Seminary in New York City. Soon afterward, she assumed leadership of her Maryland congregation.

When NASA turned up the heat on the Mars Perseverance Rover mission at about the same time, one of her experiments was selected for inclusion. This one is a suite of instruments called SHERLOC (Scanning Habitable Environments with Raman & Luminescence for Organics & Chemicals), which, she said, "was not mature enough" to find a place on earlier missions.

It's meant to look for microbial life, with tools that include a vibrational spectrometer that can identify minerals and organic molecules found on the Martian surface — such as hydrogen and carbon, the building blocks of life on Earth. It also includes two high-resolution cameras.

"Putting all this together involved a big team of people," she said, "and I'm just one person on that team."

Searching for life on Mars isn't her top priority anymore, though.

"I want to make this very clear," Conrad said. "My first job, and my first responsibility, is now as the pastor of a church. What you see on Sunday is just a part of it. I have duties to my parishioners and their needs, and in the end, people have to come first. People are a lot more tender than rocks."

Even so, she logs plenty of hours in her now part-time role in matters Martian, working from her home office since the Covid-19 pandemic hit. The schedule is breakneck and, to be sure, holding down two jobs can be more than a little exhausting.

Tired or not, there are lessons she wishes to impart while acting as a priest. Foremost, Conrad insisted, is the sacredness of all things.

"Understanding that is just one of the tools that people need to live a good life, to live in community and to treat each other well. My other lesson, I suppose, is the virtue of going gently, of living quieter and more thoughtful lives."

The pandemic, she adds, made for the perfect opportunity to reflect on that, and to deepen her mission with those lessons in mind.

ONWARD TO THE STARS

If Conrad has any regrets, they center on her early life — for when John Glenn's Mercury craft went skyward in 1962, she was just 9 and wanted more than anything else to become an astronaut. That path was denied women for decades, and she has had to make do with the distinguished, variety-packed trajectory that followed. Though studded with honors and intellectual excitement, it has kept her earthbound.

Her inquiry has broadened with the addition of a clerical role to her scientific one: the question of whether life can exist on other planets is reshaped to something more like, "If God can create life here, can God create — and has God created — life elsewhere?" The answer to that question, Conrad said, is simple: "Of course."

That life, she added, is likely to be microbial and simple, and not the ETs of our imagination. But it will be life, and that's a quest that keeps Conrad motivated and nonstop busy.

But will she ever venture into space? Don't rule it out.