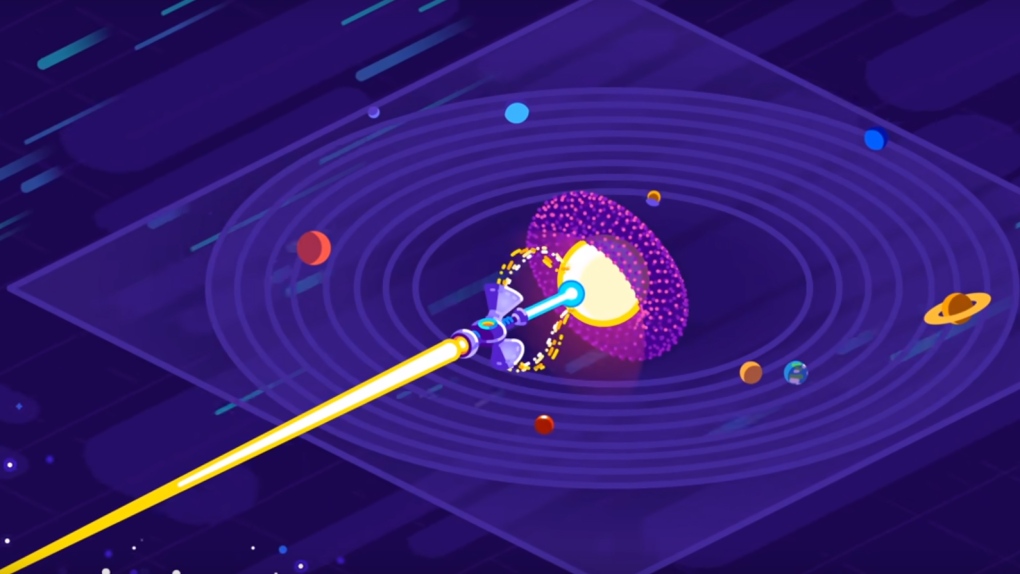 Source: Video screen grab from Kurzgesagt – In a Nutshell / YouTube

TORONTO -- It sounds impossibly far-fetched, but could a megastructure built around the sun be powerful enough to steer the entire solar system through the Milky Way?

One astrophysicist is the latest to demonstrate how it might be possible with two stellar engine designs based on the latest understanding of physics. One of the megastructures would be theoretically fast enough to move the solar system by 50 light-years in about a million years, providing enough time and distance to steer clear of a powerful explosion from a dying star, for example.

The solar system can be hypothetically moved this way, because everything in it is pulled by the sun's gravity, keeping it all in constant orbit.

The proposed designs by Matthew Caplan, a nuclear astrophysicist at Illinois State University, was published in the December 2019 issue of the peer-reviewed journal Acta Astronautica.

One is an extremely thin parabolic solar "sail" or giant mirror much like the "Shkadov thruster". It would be made from highly reflective material, thinner than a red blood cell, positioned over the sun’s poles, and would not orbit. Caplan noted that metal foils of 0.2 micrometre are commercially available. The position of the mirror is crucial in order to avoid impacting the Earth's temperature, but it also limits the direction in which the solar system can be steered.

The solar radiation reflected onto the giant mirror creates thrust and would slowly push the sun. With this "passive" method, the solar system could move as much as 100 light-years over 230 million years, according to an animated explanatory video by the Kurzgesagt YouTube channel. This would not be fast or far enough to avoid the “kill radius” of a supernova, however, Caplan wrote in his paper.

The other design was for a faster, "active" thruster, dubbed the "Caplan thruster" by Kurzgesagt, which had originally asked him to make the designs for a video. The Caplan thruster would work much like a rocket, blasting out photon particles to propel itself forward. The thermonuclear-driven thrusters would require millions of tons of fuel per second and are a modified form of the "Bussard ramjet", a conceptual interstellar spacecraft propelled by fusion energy.

Caplan's design would collect matter from solar wind through a large electromagnetic field to create fusion. There are two jets, one directed toward the sun (to prevent a collision with the star) and one away from the sun that creates a net momentum, functioning like a tug boat. A Dyson sphere would be used to lift billions of tons of mass off the sun, providing a large amount of fuel to power the jets.

A Dyson sphere is an enormous structure, such as a shell or a ring, built around a star and uses its radiation to capture energy. The concept was the product of a thought experiment on how highly advanced civilizations might satisfy its ever growing energy demand.

The Caplan thruster design would move fast enough to avoid a supernova and could redirect the solar system in its galactic orbit in about 10 million years.

"A stellar engine produces a small net acceleration of the star, not large enough to disruptthe planetary system on short timescales, but sufficiently large to deflect the star and planetary system in its galactic orbit by many light-years given millions of years," Caplan wrote in his paper. Caplan was a Canadian Institute for Theoretical Astrophysics National Fellow.

"A catastrophe such as a supernova could likely be predicted millions of years in advance, at a minimum, for an advanced civilization with detailed understanding of star formation and the supernova mechanism."

Megastructures and stellar engines themselves are not exactly new. These hypothetical concepts have been around for many decades, and have also made numerous appearances in popular culture.

Captain Picard and his crew on Star Trek: The Next Generation encountered a Dyson sphere during an investigation into a Federation ship that had been missing for decades. It powers a weapons forge on Nidavellir, a dying neutron star in Avengers: Infinity War. In The Expanse novels and television series, a megastructure turns out to be an artificial wormhole built by an extinct alien civilisation.

"With the Caplan thruster, we could turn the entire solar system into our spaceship," Kurzgesagt said in its video, adding stellar engines would be built by civilizations thinking in terms of eons, not decades.

Humanity could colonize other parts of the Milky Way, or escape the galaxy altogether, Kurzgesagt added. "A stellar engine could allow the far future descendants of humans to travel to other stars without ever having to venture into the terrifying dark abyss of interstellar space."