These dinosaur diseases, which might seem familiar, reveal how they lived and died 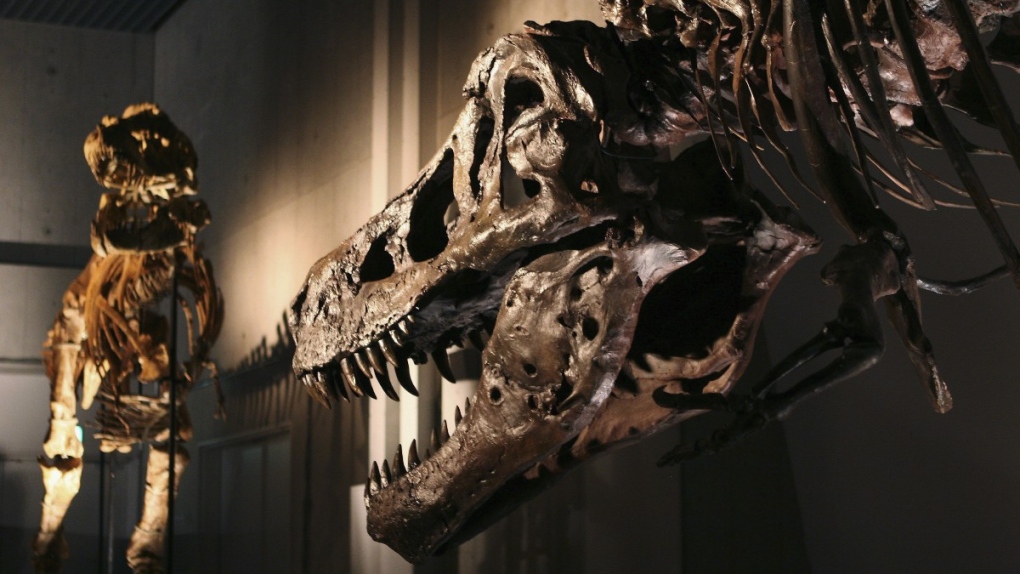 The lower jaw of SUE the T. rex is pitted with holes that experts believe were the result of a parasitic infection. (Source: Koichi Kamoshida / Getty Images via CNN)

Tyrannosaurus rex battled parasites and got gout from its meat-rich diet. Duck-billed hadrosaurs suffered cancerous tumours, and a towering sauropod in China survived a nasty pus-filled infection from a predator bite.

Dinosaurs, like us, got sick and injured. By detecting these medical conditions in fossils, paleopathologists, experts in ancient disease and injuries, are gaining tantalizing insights into dinosaur behaviour and evolution -- how a dinosaur moved through its world, the relationship between predator and prey, and how dinosaurs of the same species interacted.

Until relatively recently, however, diagnosing multi-million-year-old diseases from fossilized bones was decidedly hit-and-miss.

First off, the fossil record only reveals a small fraction of the creatures that lived in the past, and those that reach us have withstood multiple obstacles over millions of years. What's more, with soft tissue largely missing from fossils, scientists rely on bones for information. And it's often very hard to determine whether deformations in a dinosaur's bone structure were caused by disease or the crush of sediment over time.

Paleontologists can identify strange structures, bone overgrowths, rough surfaces, and holes or porous surfaces in areas where they should not be without the help of special tools. But the application of medical advances like computerized tomography to paleontology have allowed researchers to peer through rock to see what's happening inside fossilized bones.

"It's imperative to have an inner view of the bone," said Filippo Bertozzo, a post-doctoral researcher at the Royal Belgian Institute of Natural Sciences in Brussels. "If you have doubts whether a bone is deformed by pathology or geological processes, you need to see inside."

"If it's geology at play, you wouldn't see any change in the structure of the cells."

Often it takes a raft of experts in different fields to confirm a diagnosis. Think of an episode of the television series "House" for dinosaurs.

"The study of paleopathologies is more than simply identifying a disease, it is opening a window to learn about interactions with the environment and social behaviour," said Penélope Cruzado-Caballero, a paleontologist at the Research Institute of Palaeobiology and Geology of CONICET, Argentina's National Council for Scientific and Technical Research, and the National University of Río Negro (Argentina).

For example, paleontologists had long been stumped by the unusual domed skulls of Pachycephalosaurs -- small, plant-eating dinosaurs that are bit players in the "Jurassic Park" movie franchise. The discovery of bone lesions resulting from injuries in adults suggested that they used the domes to butt heads -- a bit like big-horned sheep do.

NOT JUST BIG, BUT TOUGH

The most commonly detected pathology in the dinosaur fossil record is bone fractures -- with some dinosaurs apparently surviving very severe trauma that must have left them living in great pain.

Bertozzo has detailed the injuries suffered by one Parasaurolophus walkeri, a dinosaur with a long, curved crest. Its fossil was unearthed in 1921 and has been on display at the Royal Ontario Museum in Toronto for decades.

For years, paleontologists had thought a V-shape indentation in the dinosaur's spine was part of its natural posture -- perhaps to accommodate its long, dramatic headgear.

A new analysis published in 2020 found that the dent was due to a broken back. The creature also had broken ribs, a deformed pelvis and a dental lesion. Bertozzo believes the broken back was possibly caused by a falling rock or tree, but the dinosaur didn't die of its injuries -- at least not immediately. Bertozzo said it would have lived at least four months, and their analysis suggested the injuries had begun to heal before the creature's death.

Bertozzo believes that some dinosaurs must have been able to overcome and survive massive injuries. He said one hypothesis is that a strong immune system was a survival mechanism for some herbivores, like Hadrosaurs, which didn't have defensive features like armored plates, spiked tails or sharp horns common in other plant-eating species, such as Triceratops.

Dinosaurs also lived with cancer -- in some cases the same form that afflicts humans today. A horned dinosaur called Centrosaurus apertus that lived 76 to 77 million years ago in what's now Alberta, Canada, was diagnosed in a study published in 2020 with osteosarcoma -- an aggressive malignant bone cancer that can affect humans.

Researchers concluded it was an advanced stage of cancer that may have spread throughout the dinosaur's body. But what might have been a death sentence for one dinosaur, another could endure.

Cruzado-Caballero diagnosed the same cancer in Bonapartesaurus, unearthed in Argentinean Patagonia in the 1980s. This dinosaur had a large cauliflower-like overgrowth of bone on its foot but, she said the growth hadn't spread to other parts of the animal's body, and she didn't think it would have seriously affected its day-to-day life. Likely more painful were two fractures in its tail, which healed in an abnormal position and may have been infected while healing, said Cruzado-Caballero, who is also a professor at the University of La Laguna in Tenerife, Spain.

T. rex was the ultimate dinosaur predator, weighing as much as two African elephants, but it could fall victim to the tiniest of foes: parasites.

The lower jaw of SUE the T. rex, the most complete T. rex skeleton ever found, was pitted with smooth-edged holes. Initially experts thought they were bite marks or a bone infection, but researchers ultimately concluded the holes were a result of a parasitic infection called trichomonosis. The condition can also effect the lower jaw of modern birds like pigeons, doves and chickens.

"The parasite effectively eats chunks of the jaw bone. This extremely nasty condition causes severe damage and pain around the mouth, throat and esophagus, making simple things like eating and drinking unpleasant to nearly impossible," said Dean Lomax, a paleontologist at the University of Manchester's Department of Earth and Environmental Sciences, in his book, "Locked in Time: Animal Behavior Unearthed in 50 Extraordinary Fossils."

"Once the animal was infected, feeding would have been difficult, and it is highly likely that, as seen in living birds, the mighty tyranosaurs lost considerable weight before eventually starving to death."

While SUE the T. rex, who is on display at Chicago's Field Museum, may have starved to death, paradoxically the dinosaur also suffered another medical problem that in humans is linked with overindulging in food and wine.

Gout is a form of inflammatory arthritis caused by buildup of uric acid, which can erode bones. SUE's right forearm had "gouty lesions," according to a report in Nature. The condition in animals today, including birds and reptiles, can be the result of dehydration or kidney failure. In humans, it's associated with foods that have a high purine content, such as red meat -- something that no doubt made up the bulk of T. rex meals.

COULD DINOSAURS HAVE BEEN ATTACKED BY CORONAVIRUSES?

It's also possible that dinosaurs suffered from respiratory diseases, such as pneumonia, or contagious ones like tuberculosis, although it's unclear whether dinosaurs contracted diseases similar to COVID-19. The oldest suspected case of a respiratory disease of any kind is from a 245-million-year old marine reptile.

"Birds, especially pet birds, do suffer from pulmonary infection. Birds are dinosaurs, and dinosaurs presented, most likely, a birdlike lung system," Bertozzo said. "I would expect dinosaurs to suffer from similar pulmonary infections as in birds. Of course, COVID is a novel disease, we cannot know if something similar happened in the past, so we can't say if dinosaurs suffered from COVID-like diseases."

Bertozzo is building a database to record incidences of trauma and disease across different species of ornithopods -- a family of plant-eating dinosaurs that includes iguanadons, hadrosaurs and duck-billed dinosaurs -- and across different time periods. He hopes it will help answer questions like which group of these dinosaurs was most likely to suffer disease and whether these conditions affected dinosaur behaviour.

"It's a growing field that is going to give us a lot information about the lives of these fascinating creatures," he said.