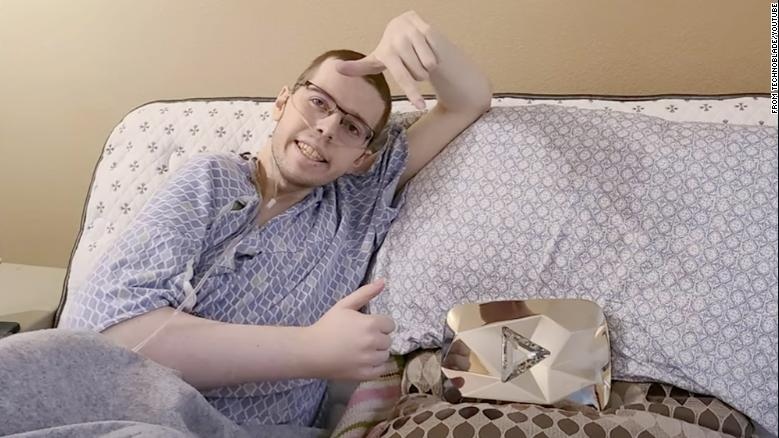 Minecraft YouTuber Technoblade has died at the age of 23 following a year-long battle with cancer. (Courtesy YouTube: Technoblade)

In a YouTube video entitled "so long nerds," the content creator's father shared a final message from his son with his subscribers.

"Hello everyone, Technoblade here," the message began. "If you're watching this. I am dead."

In the video, Technoblade, who has kept his identity a secret, revealed that his real name was Alex. He also thanked fans for supporting his content, buying merchandise, and channel memberships and joked that his siblings "are going to college."

"If I had another hundred lives, I think I would choose to be Technoblade again every single time, as those were the happiest years of my life. I hope you guys enjoyed my content and that I made some of you laugh and I hope you all go on to live long, prosperous and happy lives."

In just under a decade, Technoblade amassed nearly 11 million YouTube subscribers and 3.7 million Twitter followers as he shared his passion for Minecraft, a videogame where users can build virtual worlds out of blocks and create their own storylines. He went public with his cancer diagnosis back in August 2021, telling his followers during a video of himself playing the game that he sought medical help after experiencing pain in his arm that he initially believed was repetitive stress injury from gaming.

According to his father, Technoblade wrote his final message approximately eight hours before he died. Holding back tears, Technoblade's father described his son as "the most amazing kid" anyone could ever ask for, adding: "I miss Technoblade."

The video, which has been viewed more than 19 million times, ended with a statement from Technoblade's family, which read: "This past year had a lot of rough spots for our son as he battled stage four cancer. But he didn't complain, and kept using his famous strategic mind to try to beat what he knew were almost impossible odds. My son's bravery on this path was a shining lesson to all of us who were privileged to walk it with him. Thank you for sharing his journey through it all, as he did the work he loved for his beloved fans."

Social media has been flooded with tributes from fans, celebrities and fellow gamers.

TommyInnit, another popular YouTuber, wrote on Twitter: "Technoblade is a f**king legend. From being a massive fan, to one of his actual friends, I can't describe how thankful I am to have been in his life. I just know he's strategizing in heaven on how to beat God."

In a statement sent to CNN, Sarcoma Foundation of America paid tribute to Technoblade, sharing "deepest condolences with his family."

Brandi Felser, CEO of the charity, said in the statement: "Technoblade rallied his supporters to raise over $500,000 to date to support sarcoma research. This allowed SFA to provide research grants in Technoblade's name. Through these efforts, he leaves a legacy that will impact generations."

Felser said that Technoblade will be recognized with the organization's Courage Award, an annual honor given to individuals who inspire others "to create hope and a better life for the sarcoma community" later this year.

Russia seemingly struggles to replenish its troops in Ukraine

As Russia continues to suffer losses in its invasion of Ukraine, now nearing its sixth month, the Kremlin has refused to announce a full-blown mobilization — a move that could be very unpopular for President Vladimir Putin. That has led instead to a covert recruitment effort that includes using prisoners to make up the manpower shortage.

The GOP response to the FBI's search of Donald Trump's Florida estate this week was an especially stark example of how the party is keeping Trump nearby.

Donald Trump 'took the Fifth.' What does it actually mean?

Former U.S. President Donald Trump showed up Wednesday for questioning under oath in New York's civil investigation into his business practices. But he quickly made clear he wouldn't be answering.