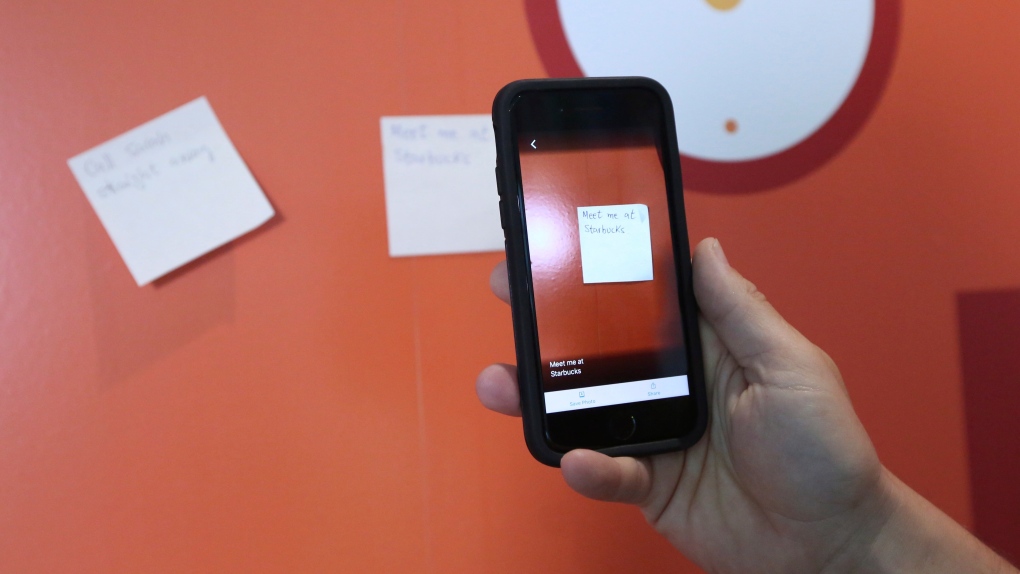 Hector Minto, a Senior Technology accessibility evangelist at Microsoft, demonstrates an app that can audibly describe a handwritten note during an interview with The Associated Press, at Microsoft offices in London, Friday, July 27, 2018. (AP Photo/Robert Stevens)

LONDON -- Hadeel Ayoub slips a black glove onto her hand before beginning the swish of sign language that is meaningless to the untrained observer. Then she pushes a button on her wrist, and a small speaker relays the message drawn in the air: "Let's Dance!"

"My dream is to give a voice to those who can't speak," says the 36-year-old inventor who is developing her BrightSign glove while working toward a Ph.D. in assistive technology at Goldsmiths, University of London.

Ayoub's glove is just one example of a bigger trend as entrepreneurs, startups and companies like Microsoft and Google try to harness the power of artificial intelligence to make life easier for people with disabilities. The initiatives come as the World Health Organization estimates that the number of people needing assistive devices ranging from wheelchairs to communication technologies will double to 2 billion by 2050.

Improvements in artificial intelligence, combined with the decreasing cost of hardware, are making it possible for inventors to develop new products without the need for the deep pockets of governments or corporations. With the help of 3D printers and the increased processing power of home computers, they are creating devices designed for people with motor, vision, hearing and cognitive impairments.

Microsoft and Google are trying to spur work in this area, offering a total of $45 million in grants to developers of assistive technologies. Microsoft says it hopes to identify promising projects that can eventually be incorporated into widely available services.

"We're certainly seeing an explosion of new technology that is looking to support people with disabilities," said Zvika Krieger, head of technology policy and partnerships at the World Economic Forum. "There are a lot of innovators out there ... who are looking to move beyond maybe a dating app or a social networking app and are looking to do something that really helps the disadvantaged."

While Ayoub hopes her efforts pay off financially, she says she is driven by a desire to create a world where disabilities become meaningless. She is trying to raise 1 million pounds to bring BrightSign to the market, estimating her gloves will cost "a few hundred dollars" each, compared with $2,000 or more for existing technology.

"My dream for BrightSign is to be the extension of the senses for the people ... who want to voice their feelings and opinions without having to always look for someone to help them out -- to give them the independence that they need and control over their own communication," she said.

The need for such products is only going to increase as the world's population ages, increasing the number of people with physical, cognitive, vision and hearing problems, according to a WHO report published this year. The challenge is to develop new technologies while also increasing the availability of simple devices like spectacles and wheelchairs that many people can't afford.

Companies are starting to recognize the financial potential of the market, as these innovations can improve products sold more widely, said Hector Minto, who has the unusual title of "accessibility evangelist" at Microsoft.

For example, Microsoft last year launched its free Seeing AI app, which turns a smart phone into a "talking camera" that helps visually impaired people do things like scan and read aloud text, recognize faces and identify products bar codes. Similar technology goes into the company's text Translator service, which costs businesses $10 to $45,000 a month, depending on the number of transactions.

"Absolutely I think there's a unique business case on its own, but definitely there's a much larger business case for Microsoft in that the tools of the future quite often will come through a disability lens," he said.

It's important to remember that all of us have impairments at times, says Robin Christopherson, head of digital inclusion at the British charity AbilityNet, which helps older people and the disabled use computers.

He explains it like this: a person with perfect sight might have a visual impairment when trying to read a smart phone in bright sunlight, or a person with perfect hearing can struggle to understand a phone call when on the street outside. As a result, technology that helps people with permanent vision or hearing problems also makes products better for everyone. In the past five years, AbilityNet's team of experts who test products to ensure they work well for the disabled has grown from six people to 22.

Innovation has not yet produced products good enough to offer complete freedom for the impaired, said Tom Kamber, executive director of Brooklyn-based Older Adults Technology Services, a non-profit that helps the elderly use technology. But there is reason for optimism because investors are actively looking for the next big thing in technology, he said.

"There's no shortage of people in Silicon Valley that will take your call," Kamber said. "The sector has advanced to the point that a lot of money is going to be made."

The Holy Grail is for such technology to be integrated into off-the-shelf products, so people with disabilities can get the help they need without extra cost, said Christopherson of AbilityNet. Christopherson, who is blind, cited the iPhone, which allowed him to swap a backpack full of equipment and cables for one device.

And then there's the opportunity for technology to help people with impairments experience the world in completely different ways.

Ford Motor Co. worked with the Aedo Project, an Italian startup, to create a device that helps blind people "feel the view" outside a car window by turning light into vibrations that, when combined with audio description, convey a sense of the scenery passing by.

While the technology is only in the prototype stage, one blind man who worked on the project described his amazement when he tried out the device for the first time.

"My first sensation when my finger went from the mountain to the sky felt like I had ended up in cream, something milky, something soft," Antonio Bruni said. "They told me: These were clouds."