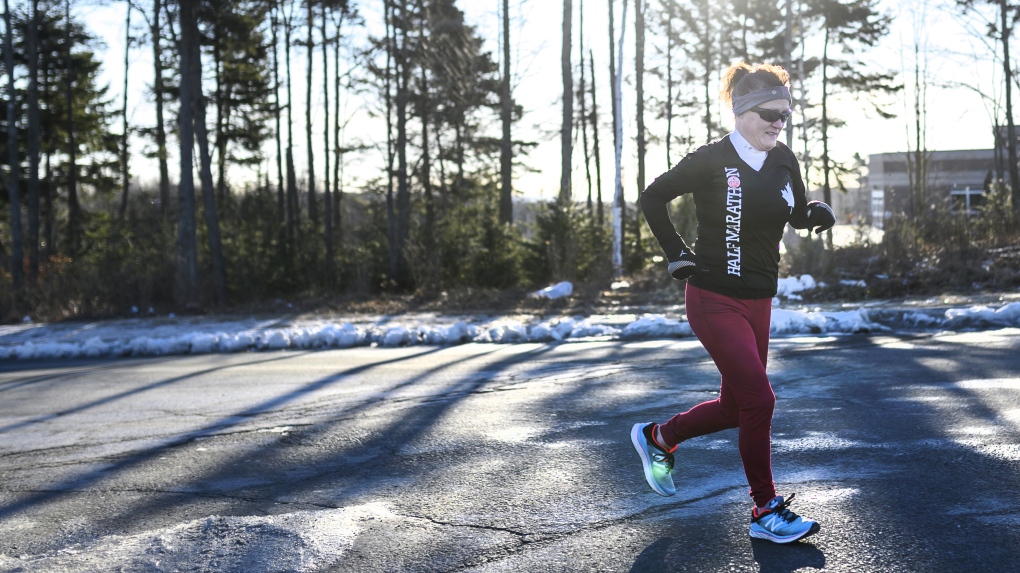 Brenda Kennedy goes for an early-morning run in her Cole Harbour, N.S. neighbourhood on Saturday, January 19, 2019. THE CANADIAN PRESS/Darren Calabrese

TORONTO -- They're hardly the most glamorous parts of the human anatomy, but the big toes take the brunt of a lifetime of walking and other weight-bearing activities, often making these lowly appendages prone to painful osteoarthritis.

Arthritis can wear away the joint's cushioning cartilage while causing a buildup of bone, resulting in swelling and stiffness that can make the mere act of walking excruciatingly painful. And unlike with arthritic knees and hips, there's been little success in coming up with an acceptable artificial joint replacement for the big toe.

Instead, orthopedic surgeons are increasingly turning to an implant of synthetic cartilage, developed in the U.S. and put through many of its clinical trial phases by researchers in Canada and the U.K.

"This technology applied in the big toe has been described by my American colleagues as a game-changer," said Dr. Mark Glazebrook, a Halifax orthopedic surgeon who was among the Canadian researchers who conducted clinical trials comparing the synthetic cartilage implant to standard treatment, known as joint fusion.

Brenda Kennedy of Dartmouth, N.S., was one of the first patients in the world to receive the Cartiva implant -- in her left big toe in 2010 -- followed five years later by one in her right big toe, both of which had been affected by osteoarthritis.

"I was having a lot of pain, the cartilage ... it was literally bone on bone," said Kennedy, 51, who regularly gave her feet a pounding doing gymnastics as a child and later as an adult when she took up running, including competing in 5K and 10K races, as well as half-marathons.

"I had been so active over the years, and I think it was just a lot of wear and tear ... And improper footwear. I wore a lot of heels."

Before her first implant surgery, Kennedy said she couldn't walk barefoot across the floor without some support for her feet because of the "searing hot pain," especially in her left toe. "Even in bed at night, I couldn't stand the sheets around my feet."

Having Glazebrook perform the synthetic cartilage implant was a life-saver, she said. "I felt the result within weeks after ... and it was just amazing."

Dr. Tim Daniels, an orthopedic surgeon at St. Michael's Hospital in Toronto, began using the Cartiva implant about a decade ago.

"The reason I got interested in it is because it's a bone-sparing implant, meaning we don't have to take out a lot of bone to get it in there," he said. "And if it doesn't work, we can still go ahead and do a fusion in a standard way."

The gumdrop-sized implant is made from polyvinyl alcohol hydrogel, the same material used in contact lenses.

After surgically exposing the joint and removing excess bone caused by the arthritis, a small cavity is drilled in one of the two bones on either side of the joint and the implant is snugged into the opening, where it acts as a cushion similar to that of natural cartilage.

"It's got the same compressability and the same characteristics as cartilage ... and it also has a low-wear characteristic," said Daniels, who has performed about 120 of the implant surgeries. "It doesn't mean it can't wear out, it just does it at a much slower rate."

However, he said fusion remains a standard option for patients, as the procedure was found in studies to provide slightly better long-term pain relief, though it does limit movement in the big toe.

With fusion, the two toe bones connected by the joint are positioned end-to-end and then held together with plates and screws. The bones then grow together, fusing into one.

"A lot of people worry about mobility," Daniels said. "Motion at the first joint is important, but it's not essential. I've done first-toe fusion in triathletes, marathon runners, even a long jumper and she returned to her sport.

"So you can do a lot with a stiff first toe as long as it isn't painful," he said, stressing that pain relief "is the Number 1 goal," no matter which option is chosen.

In a recent study of 27 patients that assessed the performance of the synthetic cartilage more than five years after their surgeries, Canadian researchers found significant improvement in function and pain reduction from the implants.

"We looked at the satisfaction rate," said Daniels, who led the study. "It was higher in the Cartiva group because the patients did appreciate the motion."

Ramona Rea, 60, developed increasingly painful arthritis in her big toe after dropping a motorcycle on her right foot some 40 years ago.

"So there was a long time for the cartilage to deteriorate and eventually it got fairly painful to walk," she said. "So it was getting to the point where it was starting to inhibit my lifestyle, which always includes a lot of activity."

Rea, who recently moved to Vancouver from Toronto, was enrolled in an earlier trial that randomized patients to receive either a Cartiva implant or fusion in a head-to-head comparison of the two procedures.

To her relief, she landed in the implant group and in 2010 had the surgery on her right big toe.

"I know they say that with fusing the joint you can still do things, but I'm sure that it limits mobility and I'm really happy that I was randomized into this arm of the trial," said Rea, who ran a 10K race with her daughter last May.

"My toe didn't bother me at all. I'm thrilled that I still have mobility."

Daniels said the synthetic cartilage is now being used to treat arthritis in the small toes and is being tested for other joints, including in the thumb and foot.

"The exciting thing, where I think it's been a game-changer, is for arthritis in the lesser toes because we literally have not had an option for that."