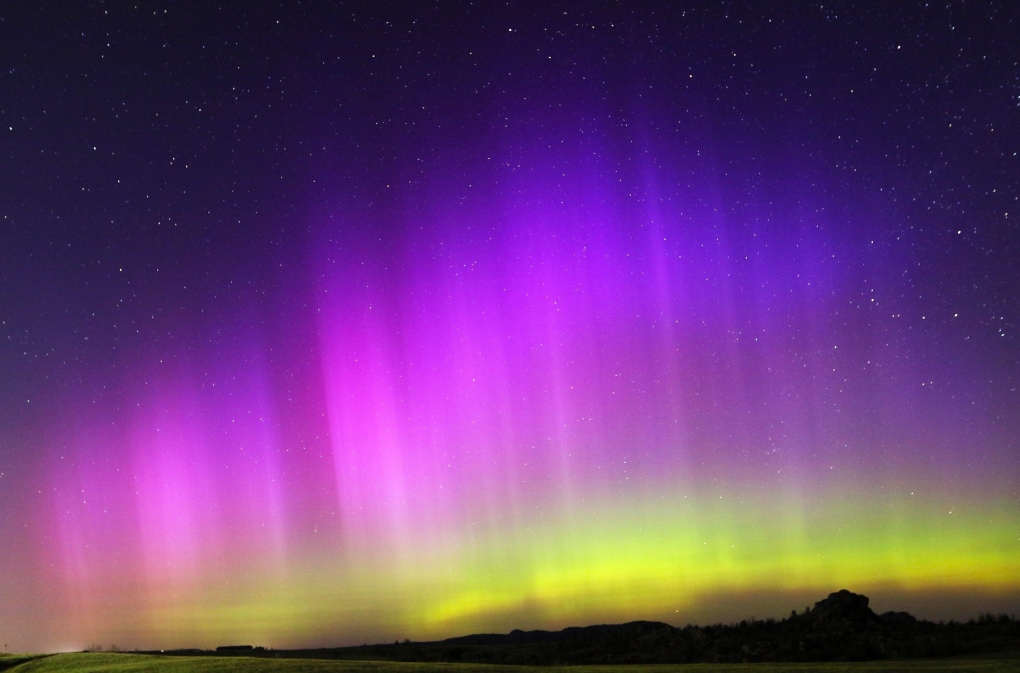 The Aurora Borealis, also known as the Northern Lights, begin to flare up with green, yellow and pink hues near the Vedauwoo Recreation Area late Monday night between Cheyenne and Laramie, Wyo. (Blaine McCartney/Wyoming Tribune Eagle)

Sky-gazers across Canada lit up social media on Saturday with photos of a Friday night Aurora Borealis spectacle.

The images show skies above parts of Newfoundland, Ontario, and Saskatchewan shimmering purple and green.

The Aurora Borealis, or northern lights, occurs when particles from the sun react with the earth’s atmosphere. The night-sky phenomenon is most commonly seen far north and away from city lights, but every once and a while the aurora dips further south.

On Friday, sky-gazers throughout Ontario also reported seeing the phenomenon.

The #northernlights made a nice appearance in Ontario last night. A beautiful array of colours danced across the sky. pic.twitter.com/VvmovJG7QT

The #NorthernLights paid a visit to @PTBO_Canada last night around 11pm. This shot was taken within city limits pic.twitter.com/vRGBO1zCLN

The lights were visible as far west as parts of Saskatchewan—but not everybody had an easy time spotting them.

Ongoing wildfires in Saskatchewan, Alberta, and B.C. caused a cloud cover that extended into the U.S. Friday, creating a haze cover in some areas.

Smoke from the wild fires in Canada really put a damper on the #Auroras #auroraborealis in central Minnesota. #MNWX pic.twitter.com/CWFLtZZ1we