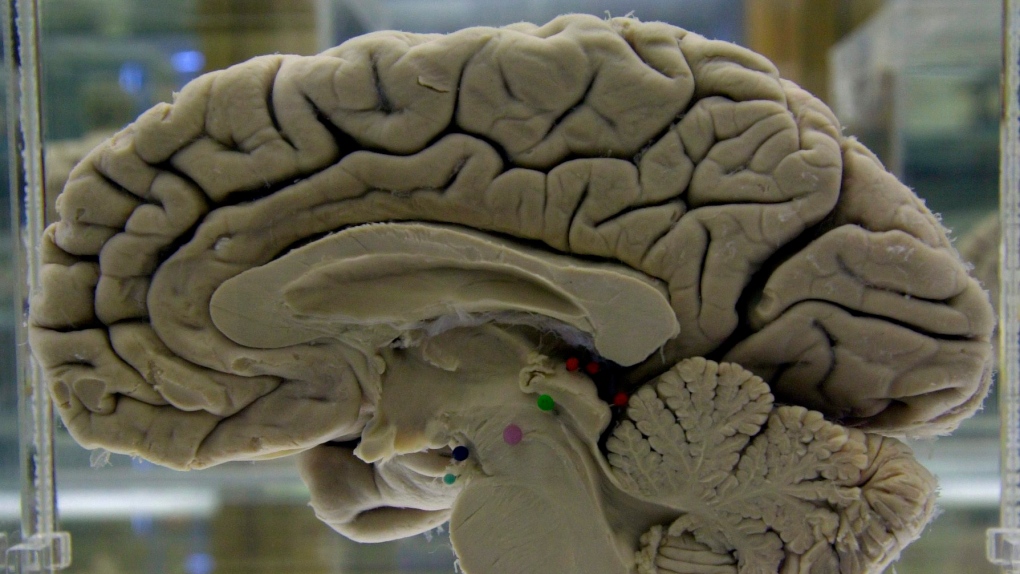 This Tuesday, Oct. 7, 2003 file photo shows a section of a preserved human brain on display at the Museum of Neuroanatomy at the University at Buffalo, in Buffalo, N.Y. (AP Photo/David Duprey)

NEW YORK -- Why do people have such big brains? Some researchers asked a really powerful brain -- a computer -- and got back a surprising answer.

In relation to body size, our brains are huge, about six times larger than one would expect from other mammals. And this three-pound organ sucks up fully 20 per cent of the body's energy needs. Evolutionary theory says to build and maintain something that costly, there must have been a very good reason.

But what is it? Did our ancestors need more brainpower to cope with the environment, such as finding and storing food? Or was it driven more by the social complexities of dealing with their peers? Or was it all about the challenge of learning and teaching cultural knowledge?

In the past, scientists have tried to tease out an answer mostly by analyzing correlations, like how brain size relates to the size of social groups in living apes and our fossil ancestors.

Mauricio Gonzalez-Forero and Andy Gardner of St. Andrews University in Scotland turned instead to computer simulations. They report the result in a paper released Wednesday by the journal Nature.

The researchers created a hypothetical population of females, focusing on just one sex for simplicity, and followed them as they faced the challenges of living. The researchers plugged in data on things like a newborn's brain size and the energy costs of the brain and reproductive organs. And they simulated tasks that resemble the environmental and social challenges included in theories about brain evolution.

The computer pondered how the pressures of each challenge might affect changes of brain size over time. Drawing on evolutionary theory, it calculated how much energy the females would be expected to invest in growing the brain versus other tissues under the different challenges. It found that stronger mental demands tended to produce bigger brains.

Gonzalez-Forero said he and Gardner expected a strong contribution to bigger brains from social challenges, which he said has been the favourite idea for decades.

But their surprise, the computer said about 60 per cent of the effect on boosting brain size came from an individual dealing with the environment on one's own, as in finding, storing and cooking food, and making stone tools. Another 30 per cent came from co-operating to deal with the environment, such as banding together to hunt. The final 10 per cent from competition between groups of people.

While the study didn't specifically look at the impact of cultural tasks, it gave evidence of a substantial influence from them, too, Gonzalez-Forero said. He plans to assess cultural factors in the future.

In any case, the results are not intended to be the final word, but rather an encouragement for other researchers to use computer simulation for studying the question of brain size. Much exciting work remains to be done, he said.

Experts unconnected to the study were skeptical of the conclusions.

Dean Falk, a brain-evolution expert at Florida State University, said the work doesn't assess the longstanding hypothesis that the development of language may have driven expansion of the brain. Gonzalez-Forero said the language idea is to some extent part of the cultural factors that remain to be addressed.

Falk also said the simulation strategy may have overemphasized the role of energy demands in influencing brain growth.

Robin Dunbar, a professor of evolutionary psychology at Oxford University, and paleoanthropologist Richard Potts of the Smithsonian Institution said they didn't think the simulation adequately mimicked the lives our ancestors lived.