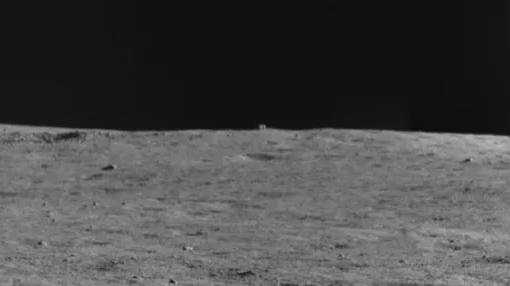 "Mysterious Hut" on the horizon, captured by Yutu 2. (Our Space)

China’s lunar rover, Yutu 2, will be investigating what appears to be a mysterious cube-shaped “hut” on the moon after spotting it recently on the horizon.

The strange shape was described first in a post last Friday on Our Space, which is associated with the Chinese National Space Administration.

In the post, Yutu 2 was rolling along at the end of October, navigating a complex region on the moon comprised of large impact craters, when drivers noticed something strange in the distance while taking pictures of the skyline with Yutu 2.

They observed what looked like a cube, protruding up from the horizon far away from them. Although it was far away, and thus hard to see properly, it looked unusually angular compared to other rocks, earning it the moniker of a “mysterious hut.”

According to Our Space, the “hut” is around 80 metres away from Yutu 2’s current location. Although the rover has a maximum speed of 200 metres per hour, the rough terrain it is in currently means that the rover will need around two to three Earth months to actually reach the structure. But a plan is in place to investigate.

Yutu 2, which means “Jade Rabbit 2,” is part of the Chang’e Lunar Exploration Program. It’s the first lunar rover to explore the so-called “dark side” of the moon, the side that faces away from Earth. While the dark side has been observed from orbit, it has never been explored on the surface in this way.

The rover is currently making its way west across the dark side of the moon, weaving through a canyon to avoid steep slopes. The day it spotted the strange hut shape on the horizon, it had conquered a climb up a hill after finding itself blocked in by slopes on three sides, according to Our Space.

While the cube-shaped object has spurred comparisons on social media to the monolith found on the moon in the sci-fi film 2001: A Space Odyssey, it’s far more likely to simply be a large boulder.

Strange things have been seen on celestial bodies before, such as a photo taken of Mars by the Viking 1 orbiter in 1976 which appeared to show a person’s face rising out of the surface of the planet. Dubbed the “Face on Mars,” further photos have shown that it was a trick of lighting on a specific rock formation.