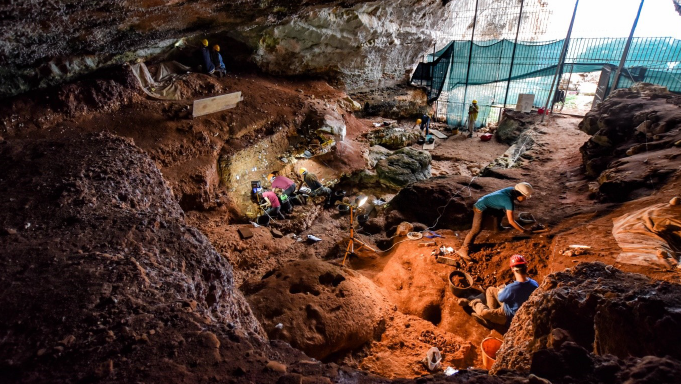 The entrance and excavation site of the Romanelli Cave is seen in this image (Antiquity journal/ L.Forti)

TORONTO -- Archeologists have discovered more ancient cave art in Italy, more than 100 years after the first images were discovered there in 1905.

The discovery of the Paleolithic art in the Romanelli Cave is detailed in the December issue of the Antiquity journal, where archeologists report seeing new images of a bird, a bovid (hoofed mammal) and geometric designs.

The team of archeologists, geologists and paleontologists were co-ordinated by Raffaele Sardella of the Sapienza, University of Rome and undertook the first systematic survey of the cave, located on Italy’s southeast coast and just seven metres above the Adriatic Sea – which made it difficult to explore in the past.

The cave was first discovered in 1874, but accessibility issues meant it was not property investigated for decades, and the first cave art discovery was not recorded until 1905. It is divided into two parts, a collapsed main chamber where large boulders have fallen from the ceiling, and an inner chamber.

Past excavation of the cave has found deposits of animal bones, a small quantity of human bones, and several portable art objects – including stone fragments that may have fallen from the ceiling or walls. The art in the main chamber is located up high in a frieze, while the inner chamber’s art is located in two small alcoves on the walls.

The newly identified artwork includes a bovid, geometric patterns made by using “moonmilk” which is a soft white material that builds up in limestone caves, and a “rare depiction” of a bird, most likely an auk, according to the journal. Other auk figures have been found in cave art in Spain and France.

Birds were not frequently depicted in Paleolithic art, according to the journal, making the find particularly significant. Details in the piece, including three short lines close to the eye of the figure, resemble the coloured stripe of feathers grown by the now-extinct great auk during winter.

The images share similarities with other cave art discovered in other parts of Italy, France, Spain and Azerbaijan, the journal says, and show that the artists used multiple tools to create their art.

Archeologists had to be exceptionally careful due to the art’s poor state of preservation, using photography and enhanced image editing software to avoid direct contact with the rock surface.

“They [the new images] further confirm the existence of a shared visual heritage across a wide part of Eurasia during the Late Upper Paleolithic [period], opening new questions about social dynamics and the spread of common iconographic motifs around the Mediterranean Basin,” said Dario Sigari from the Universita degli Studi di Ferrara in the journal, whose team has been studying the cave since 2016.

Sigari noted that there are indications that this shared heritage could extend as far as North Africa and the Caucasus, and his team’s excavation of the cave determined that the cave was in use between 11,000 and 14,000 years ago.

“These new dates and the fact images are layered over each other suggest the cave was in used for a longer period than previously supposed, with multiple episodes of art-making,” he said.