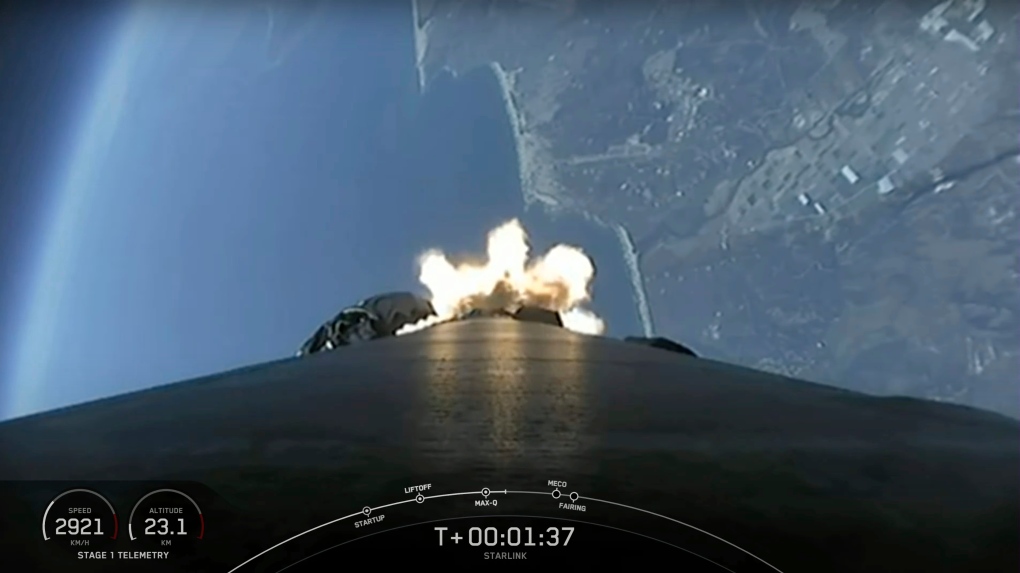 This video image provided by SpaceX shows a SpaceX Falcon 9 mission to launch 53 Starlink satellites to low-Earth orbit from Space Launch Complex 4 East (SLC-4E), takes off from Vandenberg Space Force Base, Calif., on Friday, May 13, 2022. (SpaceX via AP)

SpaceX's satellite-based internet business, Starlink, now has approval from the U.S. government to expand its service to planes, ships, automobiles, RVs and other mobile vehicles.

The move sets the company up to expand its customer base, which so far has been focused solely on providing roughly US$100-per-month internet services to homes, mostly in areas that aren't serviced by traditional ground-based internet service. It has hundreds of thousands of subscribers around the world.

Now, the company is likely to begin rolling out service to commercial airlines, possibly beginning with Hawaiian Airlines, which signed a deal with SpaceX in April saying it planned to bring complimentary Starlink services to some jets.

The regulatory approval, handed down from the Federal Communications Commission on Thursday, also grants SpaceX the ability to expand its service to trains, ships, and other vehicles, opening up a broad swath of potential corporate customers. The company has also already been advertising its services for RV drivers.

Traditionally, airlines, ships and trains have relied on satellites in geosynchronous orbit, a band of orbit that lies more than 22,000 miles away, provided by companies such as ViaSat. SpaceX's Starlink takes a different approach to beaming internet from space by putting thousands of satellites in low-Earth orbit, or just a few hundred miles off the ground. The company says this offers lower latency, or lag times, for its service.

It's not clear how Starlink's mobile services may be priced, but SpaceX does already market its service directly to businesses.

"With more than double the antenna capability of Starlink, Starlink Business delivers faster internet speeds and higher throughput," the company states on its website. "US$500/mo with a one-time hardware cost of US$2,500."

SpaceX also rolled out Starlink for RVs earlier this year for US$135 per month, though prior to this week's FCC approval, the service focused on providing internet to RVs only when they are stationary.

For those hoping to have internet access rolled out directly to their cars, SpaceX and Tesla CEO Elon Musk said on Twitter last year that likely won't be the case, saying "Not connecting Tesla cars to Starlink, as our terminal is much too big. This is for aircraft, ships, large trucks & RVs."

The FCC's decision also marks yet another chapter in an ongoing battle over spectrum rights. Spectrum refers to a range of radio frequencies, and federal regulators closely guard what companies are allowed to use which frequencies so that signals don't interfere with one another.

SpaceX did not respond to a request for comment for this story.