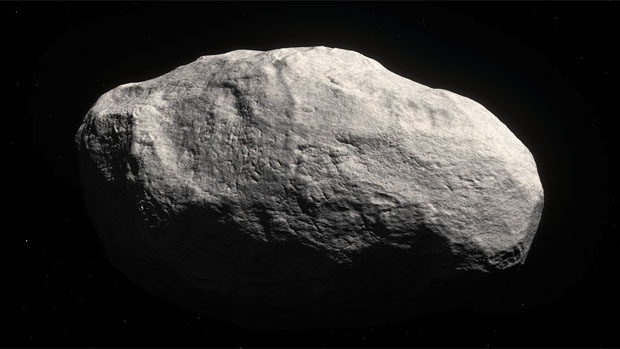 An artist's rendering of a tailless comet.

Astronomers have spotted a space oddity -- a unique tailless comet that could provide new answers about how the solar system developed into its current configuration and how planets like Earth were formed.

The kitty-comet has been dubbed Manx, after a breed of cats born without tails.

Besides its tailless shape, the comet is unique because it appears to have much less water in its composition than most comets. That would also explain its lack of a tail, as most comets develop tails when they approach the sun and vapour is released and reflected in a dazzling light show in the comet's wake.

The rocky composition of C/2014 has scientists surmising that it was formed in the same region as Earth, the inner Solar System, then flung far out, likely to the Oort Cloud, a cold and desolate region that preserved the comet far from the sun for billions of years.

The astronomers believe the comet was "nudged" relatively recently into an orbit that brings it closer to the sun, and into range for observation and study.

"We already know of many asteroids, but they have all been baked by billions of years near the Sun. This one is the first uncooked asteroid we could observe: it has been preserved in the best freezer there is," said lead author Karen Meech of the University of Hawai`i's Institute for Astronomy.

Meech and her colleagues believe the comet is one of the building blocks of the rocky planets, such as Earth, and can therefore serve as a Rosetta stone of sorts as they try to unravel the mystery of Earth's formation.

"We found the first comet, and we are looking for others. Depending how many we find, we will know whether the giant planets danced across the solar system when they were young, or if they grew up quietly without moving much,” said Olivier Hainaut, an astronomer with the European Southern Observatory in Germany, and co-author of the paper, in a statement.

The comet was first discovered in 2014 by the Panoramic Survey Telescope and Rapid Response System, or PanSTARRS1, which searches the night sky for fast moving comets and asteroids.

Data from additional Manx comets, if indeed more are discovered, could help scientists refine computer models that are used to model the formation of the solar system's formation, Meech said.