Space-grown lettuce just as good as on Earth, astronauts say 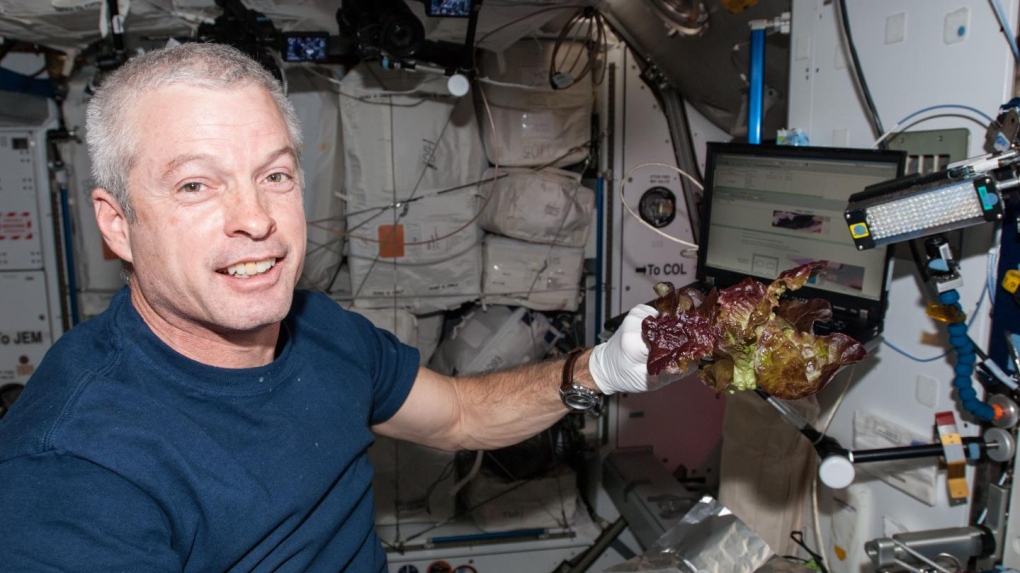 Astronaut Steve Swanson harvests some of the crop in June 2014. (NASA)

The astronauts floated around, expressing delight as they tasted something entirely unexpected in space.

"Awesome! Tastes good! I like that! It's fresh!" they said, between bites of the "Outredgeous" red romaine lettuce.

It was the first time astronauts were able to enjoy the fruits of their labour after growing produce from seeds and harvesting it.

Ice cream was possible in space before fresh vegetables -- but in space, lettuce actually tastes like lettuce. The same can't be said for creamy delights.

In the August 2015 video NASA shared of the experience, U.S. astronauts Scott Kelly, Kjell Lindgren and Japanese astronaut Kimiya Yui appear surprised as they munch on the leaves.

Research about the lettuce experiment, which began in 2014, published Friday in the journal Frontiers in Plant Science to herald that space lettuce isn't just tasty, it's also safe to eat.

The first experiment happened in May 2014, not long after NASA's first-ever Vegetable Production Systems growth chambers were delivered to the space station. The results from that first harvest were frozen and sent back to Kennedy Space Center for analysis. Initial tests showed the lettuce was safe.

Since then, a multitude of greens have been grown on the space station, and astronauts have been consuming some of the fruits of their space labour on the station ever since.

Researchers analyzed the red romaine lettuce crops from 2014 to 2016 and determined that lettuce grown in space is not only safe for astronauts to eat -- it's also free of disease-causing microbes and as nutritious as lettuce grown on Earth.

"The ability to grow food in a sustainable system that is safe for crew consumption will become critical as NASA moves toward longer missions. Salad-type, leafy greens can be grown and consumed fresh with few resources," said Christina Khodadad, study author and researcher at NASA's Kennedy Space Center in Florida.

Astronauts rely on pre-packaged meals they rehydrate in space. Dried fruits, nuts, peanut butter, chicken, beef and shrimp cocktail are all on the menu -- but no salads can be that processed and survive the trip to zero gravity.

The processed meal packets are also lacking in some vitamins and nutrients, including potassium and vitamin C, B1 and K, which can degrade over time.

Fresh produce seemed like the best answer to that problem, which will need to be addressed as NASA plans for long-term spaceflight missions to the moon and Mars.

Astronauts will have to be "Earth-independent" in the future, according to NASA, and this is a step forward in making that possible.

But first, NASA had to learn how to grow vegetables in space -- and make sure they were safe to eat.

"Veggie" has become the nickname for Vegetable Production Systems, the station's space garden.

It's the size of a piece of carry-on luggage, according to NASA. It can hold about six plants, which are grown from sterilized seeds embedded on wicks in "pillows."

Those pillows contain a calcined clay-based foundation, which is also used on baseball infields, and fertilizer. This ensures that water and nutrients are evenly distributed around the roots. A fan provides even air distribution.

Without the pillow structure, the roots would drown or dry out because water doesn't flow in space the way it does on Earth -- it forms bubbles. Plant pillows and root mats are injected with water and the wick helps deliver water to the seeds.

The seeds are placed so the roots grow down and the leafy tops emerge at the top. The plants emerge from holes in the pillows, responding to special lights above them that emit a magenta pink glow. The plants emit green light and soak up blue and red light, hence the magenta color.

These can be picked, sanitized and eaten like a salad. Currently, there's no way to "cook" them on the station.

"Veggie has shown us we can grow plants in space pretty darn similarly to how we do on Earth," said Veggie lead scientist Gioia Massa in 2015, speaking after the successful experiment.

NASA's biggest concern about growing produce in space was making sure the greens were safe to eat in an environment impacted by radiation.

Scientists also wanted to see if the plants developed harmful microbes on the surface, which could be transferred to the astronauts if they ate them. Microbiological testing is part of food safety on Earth, but it didn't yet exist for space plants.

To provide a control for the experiment, plants were grown using similar conditions on Earth. The temperature, amount of carbon dioxide and humidity recorded on the space station was replicated at Kennedy Space Center.

The plants were grown between 33 and 56 days, with the Earth-based plants on a 24 to 72-hour delay to match conditions.

In some of the experiments between 2014 and 2016, the levels of potassium, sodium, phosphorus, sulphur and zinc were higher in space station plants than they were on Earth. The same was true of phenolics, found in tomatoes and apples, which have anti-inflammatory, anti-cancer and antiviral properties.

Lettuce on Earth and in space had similar levels of antioxidants.

When the Veggie team studied the roots and leaves of the lettuce grown in space, they also found microbes that formed there similar to those that formed on Earth-grown lettuce. This was unexpected, because the space station has its own unique microbes.

The microbes were not bacteria associated with human pathogens, and they didn't detect food-borne pathogens E. coli, Salmonella and Staphylococcus aureus, which have been associated with some lettuces processed on Earth.

Spores of fungus and mold were also found to be within the normal range that's acceptable for humans to eat, based on the produce consumed on Earth.

The researchers have determined that the lettuce can "provide a safe supplement to the astronauts' diet."

"The International Space Station is serving as a test bed for future long-duration missions, and these types of crop growth tests are helping to expand the suite of candidates that can be effectively grown in microgravity," said Massa.

"Future tests will study other types of leafy crops as well as small fruits like pepper and tomatoes, to help provide supplemental fresh produce for the astronaut diet."