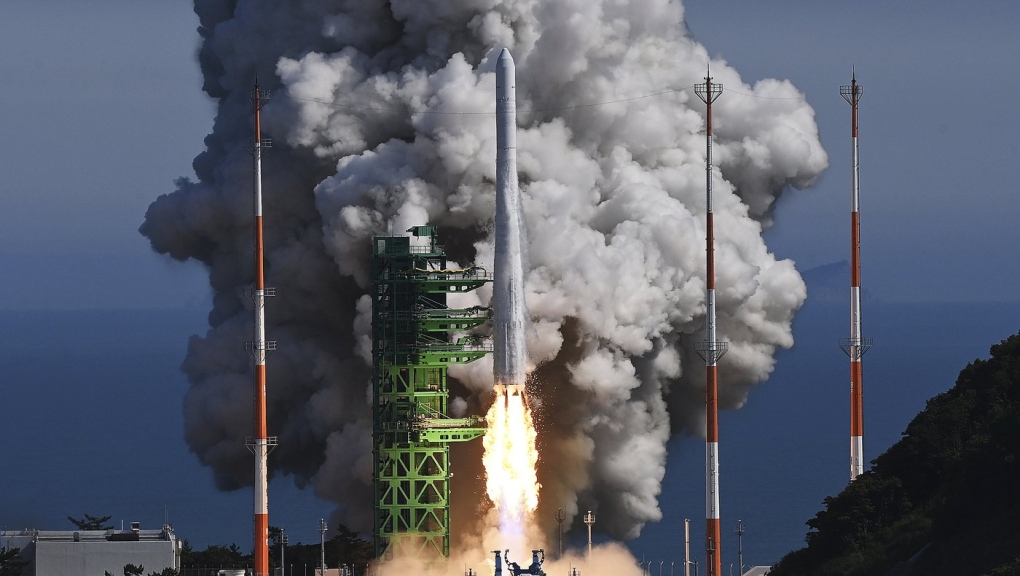 The three-stage Nuri rocket placed a functioning "performance verification" satellite at a target altitude of 700 kilometers (435 miles) after its 4 p.m. liftoff from South Korea's space launch center on a southern island, the Science Ministry said.

The satellite transmitted signals about its status to an unmanned South Korean station in Antarctica. It is carrying four smaller satellites that will be released in coming days for Earth observation and other missions, ministry officials said.

"The science and technology of the Republic of Korea have made a great advance," Science Minister Lee Jong-Ho said in a televised news conference at the launch center. "The government will continue its audacious march toward becoming a space power together with the people."

In a video conference with scientists and others involved in the launch, President Yoon Suk Yeol congratulated them for their achievement and vowed to keep his campaign promise to establish a state aerospace agency, according to his office.

The launch made South Korea the world's 10th nation to place a satellite into space with its own technology.

It was South Korea's second launch of a Nuri rocket. In the first attempt last October, the rocket's dummy payload reached the desired altitude but didn't enter orbit because the engine of the rocket's third stage burned out earlier than planned.

South Korea, which has the world's 10th largest economy, is a major producer of semiconductors, automobiles and smartphones. But its space development program lags behind that of Asian neighbors China, India and Japan.

North Korea placed Earth observation satellites into orbit in 2012 and 2016, though there is no proof that either one has ever transmitted spaced-based imagery and data back home. The North Korean launches resulted in UN economic sanctions because they were viewed as covers for testing the country's banned long-range missile technology.

Since the early 1990s, South Korea has sent a slew of satellites into space, but all used foreign rocket technology or launch sites. In 2013, South Korea successfully launched a satellite for the first time from its soil, but the first stage of the rocket was Russian-made.

The transfer of space launch technology is strictly restricted under a multilateral export control regime because it has military applications. Ballistic missiles and space launch vehicles often share similar bodies, engines and other components, though missiles require a reentry capability and other technologies.

"If you put a satellite on the top of a rocket, it would become a space launch vehicle. But if you mount a warhead on it, it becomes a weapon," said Kwon Yong Soo, a former professor at Korea National Defense University in South Korea. "(A successful launch) is really meaningful because we also succeed in the test of a long-range rocket that can be used to build a long-range missile."

Lee Choon Geun, an honorary research fellow at South Korea's Science and Technology Policy Institute, said it would be difficult to directly use Nuri as a missile because it employs liquid fuels that must be kept at extremely low temperatures and requires much longer fueling time than solid fuels. He said North Korean long-range missiles also use liquid fuels, but extremely toxic ones that are maintained at ordinary temperatures and require less fueling time than Nuri.

This year, North Korea has test-launched about 30 missiles with ranges that potentially place the U.S. mainland and regional allies South Korea and Japan within striking distance.

South Korea already has missiles that can hit all of North Korea, but some experts say it also needs longer-range missiles because it's surrounded by regional military powers and potential adversaries.

"If we only think about North Korea, a long-range missile doesn't mean much for us. But it's very unfortunate that military powers like China and Russia are near us," Kwon said.