Some polar bears are getting short-term benefit from thinning ice: study 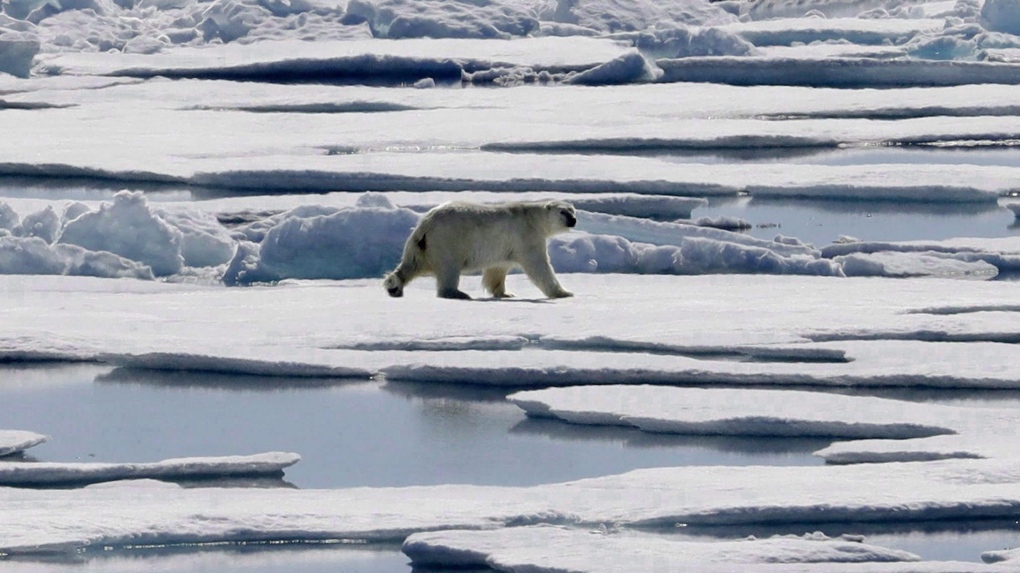 TORONTO -- New research shows that a small subpopulation of polar bears that used to live on thick, multiyear sea ice are getting a short-term benefit from the ice thinning as temperatures warm.

The new study has found that the Kane Basin polar bears that live far above the Arctic Circle in a frigid channel between Canada's Ellesmere Island and Greenland, are "doing better," on average, in recent years than they were in the 1990s.

According to researchers at the University of Washington, the bears are becoming healthier as conditions are warming because thinning and shrinking multiyear sea ice is allowing more sunlight to reach the ocean surface, which makes the system more ecologically productive.

"We find that a small number of the world's polar bears that live in multiyear ice regions are temporarily benefiting from climate change," the study's lead author and University of Washington polar scientist Kristin Laidre said in a press release.

The findings were published Wednesday, in the journal Global Change Biology.

Researchers say roughly 300 to 350 polar bears live in Kane Basin and make up approximately 1-2 per cent of the world's total population.

However, the duration of these benefits is unknown.

Laidre said it is only a matter of time before these polar bears start to experience the negative impacts of global warming.

"Under unmitigated climate change, we expect the Kane Basin bears to run into the same situation as polar bears in the south -- it's just going to happen later. They'll be one of the last subpopulations that will be negatively affected by climate change," Laidre said.

Laidre explained that all of the world's 19 polar bear subpopulations, including Kane Basin, are experiencing a shorter on-ice hunting season, according to a 2016 study she led.

During winter, polar bears venture out on sea ice to catch seals. In the summer, when the sea ice melts, the polar bears fast on land. With a shortened hunting season, Laidre said it makes it more difficult for the animals to meet their nutritional needs.

The study looked at Kane Basin polar bears using satellite tracking data and direct physical measurements from 1993 to 1997 to compare with data between 2012 and 2016. The body condition, or fatness, improved for all ages of males and females and the average number of cubs per litter -- another measure of the animals' overall health -- was unchanged.

The data also showed that these bears travelled across larger areas in recent years, covering twice as much distance and ranging farther from their home territory than in years previous.

Researchers reported a major shift in the sea ice in Kane Basin between the two periods with about half of the area covered in multiyear ice in the peak of summer during the 1990s, while in the 2010s, the region was almost completely annual ice, which melts to open water in summer.

Even though there is now more open water in the area, researchers say the marine ecosystem has become more productive as annual sea ice allows more sunlight through for more algae grow, which supports more fish and in turn attracts seals.

"Two decades ago, scientists hypothesized that climate change could temporarily benefit polar bears in multiyear ice regions over the short term, and our observations support that," Laidre said in the release.

A subpopulation of polar bears on the other side of Ellesmere Island in Canada's Norwegian Bay may also be in a similar situation to those in Kane Basin, Laidre said, but no data currently exists for those animals.

However, Laidre stressed that these are only "temporary benefits in a limited area and to a very small number of bears."

If conditions continue to warm, she explained that these northernmost polar bears will likely face the same fate as other populations as they will have to move farther north where the water get deeper.

"It's important not to jump to conclusions and suggest that the High Arctic, which historically was covered by multiyear sea ice, is going to turn into a haven for polar bears," Laidre said.

"The Arctic Ocean around the North Pole is basically an abyss, with very deep waters that will never be as productive as the shallower waters to the south where most polar bears live."