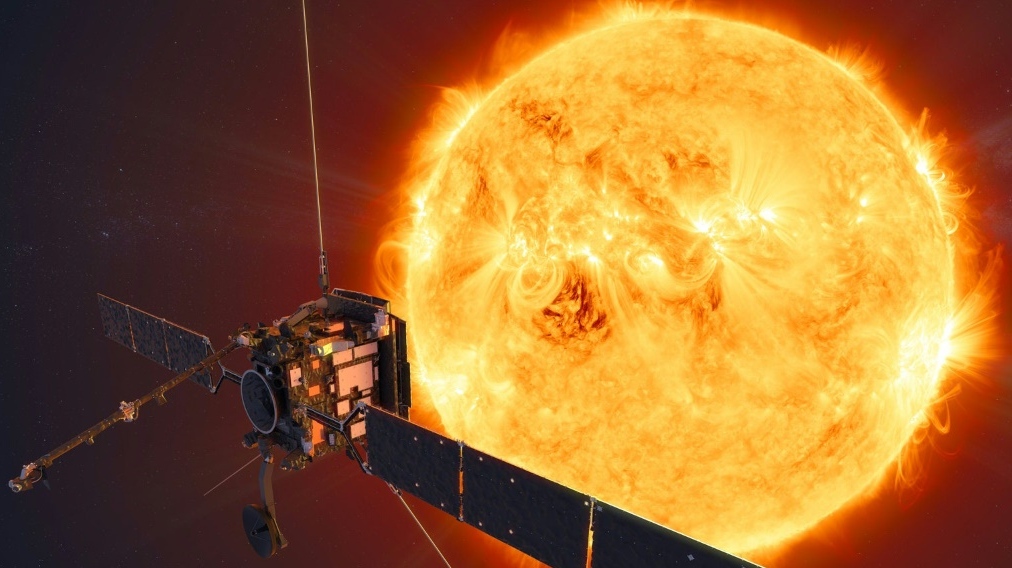 This handout illustration image released by The European Space Agency, shows an artist's impression of the Solar Orbiter in Space. (AFP)

PARIS, FRANCE -- Scientists said Thursday they had obtained the closest ever images taken of the sun as part of a pan-European mission to study solar winds and flares that could have far-reaching impacts back on Earth.

The European Space Agency's Solar Orbiter blasted off from Florida's Cape Canaveral in February and completed its first fly by of our star last month, sending back unprecedented images of phenomena close to its surface.

"We can already see hints of very interesting phenomena that we have not been able to observe in detail before.

"This makes us confident that Solar Orbiter will help us answer profound open questions about the Sun."

In particular, the team observed dozens of miniature solar flares, known as "campfires", which until now had never been captured on film.

David Berghmans, from Belgium's Royal Observatory, said the campfires were several million times smaller than solar flares, which can be observed from Earth.

"The Sun seems relatively calm on first viewing but when you look at it in detail you can see miniature eruptions everywhere," he said.

Solar winds and flares emit billions of highly charged particles that impact planets, including Earth. But the phenomena remain poorly understood despite decades of research.

The largest solar storm on record hit North America in September 1859, knocking out much of the continent's telegraph network and bathing the skies in an aurora viewable as far away as the Caribbean.

Solar ejections can also disrupt radar systems, radio networks and can even render satellites useless, though such extremes are rare.

During its first orbit, the craft -- developed in conjunction with NASA -- travelled around 77 million kilometres (48 million miles) from the surface, about half the distance between the Sun and Earth.

Equipped to withstand temperatures as high as 500 degrees Celsius (930 Fahrenheit), it will eventually travel as close as 40 million kilometres from the surface, protecting its instruments with a heat-resistant structure that will be exposed to sunlight 13 times stronger than on Earth.

Its operators plan to gradually tilt the craft's orbit, enabling scientists to obtain the first ever images of the Sun's poles.

The Solar Orbiter mission and is set to last up to nine years at a cost of some 1.5 billion euros (US$1.7 billion).