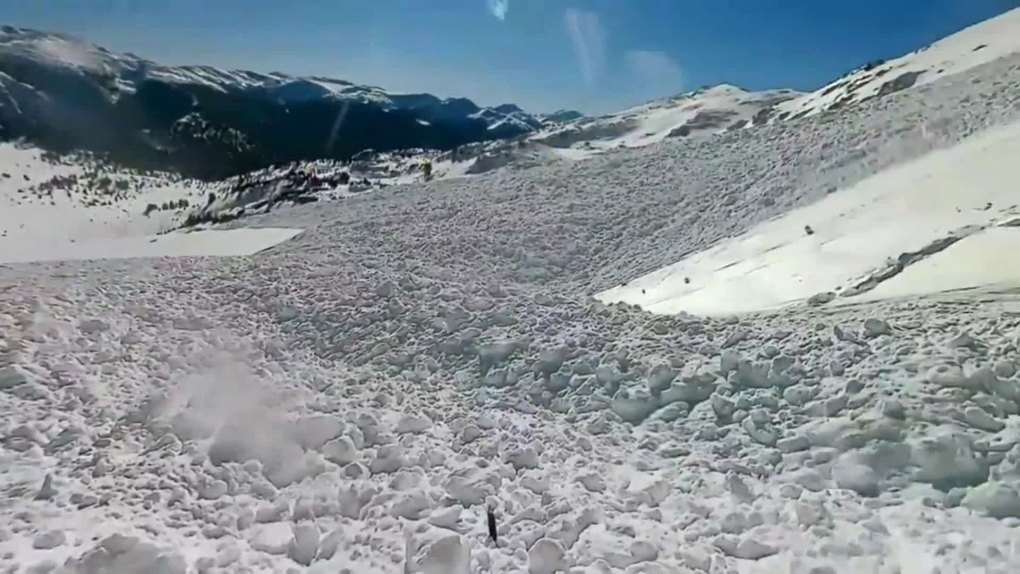 Less than a minute after carving down the slopes of backcountry Colorado, a snowboarder was swept up in an avalanche.

Maurice Kervin was snowboarding on January 8 at No Name Peak near Loveland Pass in Summit County when he turned around to see snow coming for him, he said.

"I was in awe of how big it was, and very thankful that I was alive, honestly, or not buried, not fatally injured," Kervin told CNN. "The magnitude of it was definitely enough to bury you, mangle you or possibly kill you. It was very intense."

Not only did the 25-year-old Denver man survive, but Kervin managed to escape free of injury. He captured the adrenaline-pumping experience on video around 1 p.m.

Avalanches are unpredictable and dangerous, and not every story has a good ending like Kervin's did.

Kervin said he realized something was wrong when he saw "shooting cracks" below him.

"The snow is breaking into blocks, essentially, and it looks like shooting cracks or spider webs in front of you in the snow as it like breaks apart," he said.

As the snow started to drag him under, Kervin said he used his backpack, fitted with an airbag, to keep him on top of the snow.

Air whooshed, sounding like a lot of air pressure being released all at once, as heard in the video. Snow hurtled at him and around him as he tumbled around 305 metres.

"I dropped my ax and my camera that was in my back hand and pulled my airbag, which helped me float above the snow," Kervin said. "I was able to get my feet above the snow after going off a small cliff and able to float on top of the snow until I came to a stop."

Once he came to a stop, the world was "still moving around me," he said. "It was very surreal in the moment."

Kervin, a cryptocurrency investor and amateur snowboarder, said he knew the conditions made for a risky run, but he said he spent time checking on snow conditions as he and a buddy hiked two miles to the peak. They felt confident to make their run.

"As anybody who has ever been caught in an avalanche might say, we thought that we were in the clear and so we decided that it was a go, and it clearly wasn't," he said.

Kervin called 911 and learned a search and rescue operation had already started, he said.

90 PER CENT OF AVALANCHES CAUSED BY HUMANS

Two people were caught in avalanches that day and both were triggered by humans, CAIC Director Ethan Greene told CNN. Kervin started one of them, he said.

"About 90% of the accidents that we have are where somebody dies or somebody in their party triggers the avalanche, rather than a natural avalanche that hits somebody," he said.

It's pretty common for a human to trigger an avalanche. So far this year, Colorado has had an above average amount of avalanches, Greene said.

CAIC has recorded 259 avalanches in Colorado so far this year, as of Saturday evening, Greene said.

"In Colorado, we record around 4,000 avalanches a year. Getting almost 300 in a couple week period is a lot but not unusual," he said. "Because of the snowpack this year, we've seen more human-triggered avalanches than usual."

Greene said it's easy to trigger an avalanche, but it's possible to avoid areas that may be dangerous. It just takes some training and planning.

"What I want to tell people is what they should do is check the forecast before they go into the backcountry, so they can make a plan for the day that is appropriate for the conditions," he said. "Getting a little bit of training can also save their life."

Greene encourages people to check avalanche.org for conditions in their area. He also said to carry the right equipment, "an avalanche rescue transceiver, probe pole and shovel," in case you get into a bad situation.

"After the snow goes through in an avalanche, it gets very hard, almost like concrete," he said. "You're not going to be able to dig yourself out. The snow is so hard you're going to need somebody else's help."

Three skiers lost their lives to avalanches the weekend before Christmas during an "especially dangerous" period in Colorado's popular backcountry, officials said.

Kervin, who has been skiing since he was 4 or 5 years old, suggests going with a partner or a group of people whenever you are skiing.

He hopes that people see what happened in his video and get the proper education, gear and people to go with before they go out into the backcountry, he said.

"I'm not going to condone anybody trying to go do what I did. That's my own personal choice," he said. "Be safe in the backcountry and understand risk assessment and where you stand."