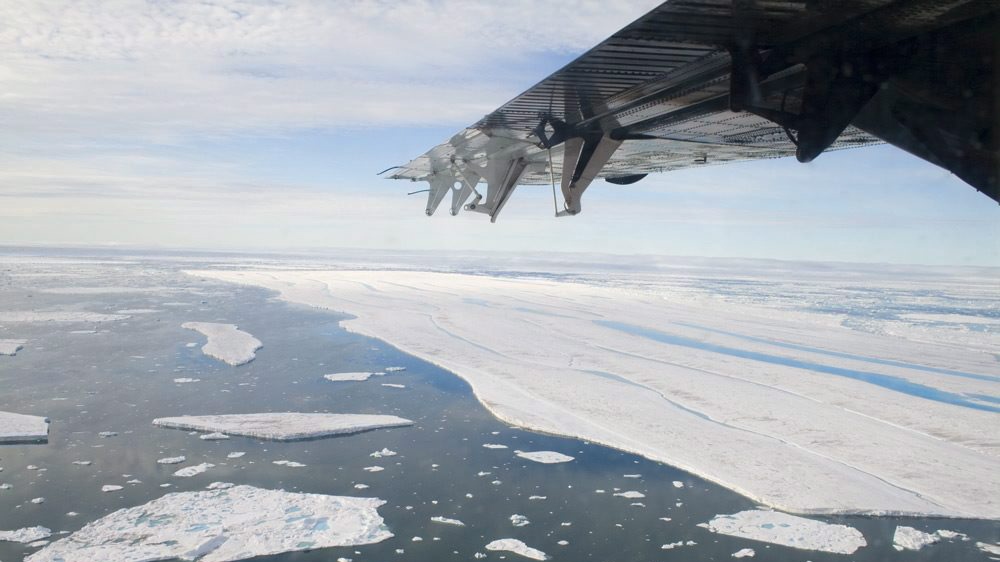 A four-square-kilometre pice of ice is shown drifting last week after it separated from the Ward Hunt Ice Shelf. THE CANADIAN PRESS/Sam Soja

Derek Mueller, a senior researcher at Carleton University, cut his scientific teeth studying mats of microbes on some of Canada's oldest, thickest and most remote sea ice.

"They have some very interesting pigments in their cells to fend off harmful UV radiation," Mueller said in an interview.

"It's kind of a tricky thing to do, physiologically. You never know. It could very well be that someday we discover something useful out of that life."

That's one reason why he, along with colleagues and Inuit groups, are calling for stronger protections for Canada's northernmost waters as the so-called Last Ice Area rapidly lives up to its name.

"It's so poorly understood," said Mueller, co-author of an article in the journal Science that urges the federal government to expand and make permanent the conservation of Tuvaijuittuq, 320,000 square kilometres of frozen ocean off the northern coast of Ellesmere Island.

Tuvaijuittuq, which means "the place where ice never melts" in Inuktut, has the thickest and oldest ice in the Arctic. Because of how ice moves in ocean currents, Tuvaijuittuq is likely to be the last place it remains.

The region is provisionally protected until 2024. But Mueller said the pace of Arctic warming argues for permanent status as a Marine Protected Area connected to Quttinirpaaq National Park on Ellesmere's north coast.

Just last July, 40 per cent of the area's Milne Ice Shelf collapsed within two days -- 80 square kilometres of ice that had been stable for millennia now adrift. It happened so quickly an uninhabited research camp was lost.

"(The area's) under threat and we're hoping for conservation measures to mitigate that," Mueller said.

The Qikiqtani Inuit Association is working with the federal and Nunavut governments to determine if Tuvaijuittuuq should be permanently protected and, if so, how.

"QIA is leading an Inuit knowledge study which will really try to tackle what is current and historical Inuit use of the area," said Andrew Randall, the association's director of marine and wildlife stewardship.

"(We're) looking at cultural sites, some of the impacts associated with climate change."

Inuit want to understand what resources might lie in the area, Randall said. They also want to ensure Inuit play a role in managing and studying it, he added.

The Arctic sea ice ecosystem may seem desolate, but it's anything but, said Mueller. The ice supports a whole range of life important to humans and animals a long way away.

As the rest of the circumpolar world shifts under climate change, ensuring that a piece of the frozen Arctic remains free of human disturbance is key to understanding both how things used to be and what they are becoming, said Mueller.

Just this year, scientists discovered a whole ecosystem of shellfish, anemones, starfish and brittle stars living on shelves in pockets within the ice.

"What a wonderful surprise!" said Mueller. "We are now just beginning to understand this environment."