Scientists stumble across endangered whale not seen in Canada in years 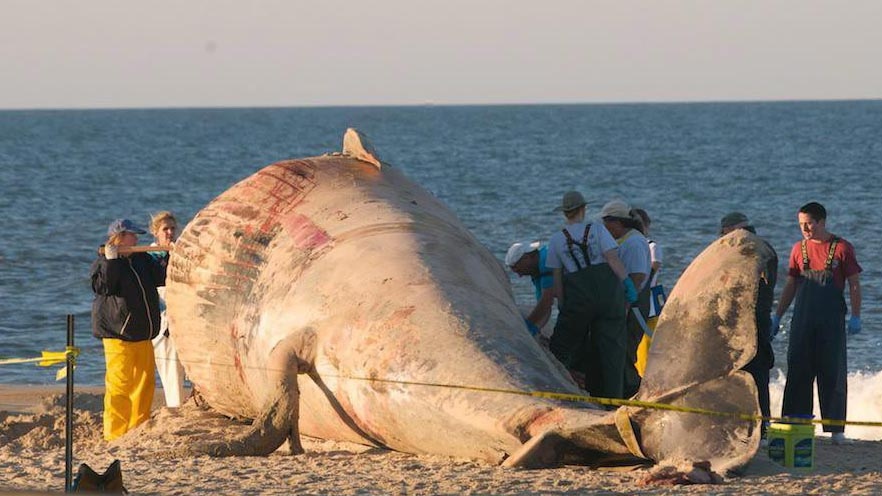 In this May 20, 2009 file photo, volunteers perform a necropsy on a Sei whale that washed ashore in Dewey Beach, Del. (The Daily Times, Will Hall / AP)

OTTAWA -- For a handful of researchers surveying marine life off British Columbia's coast -- it was a whale of a tale.

This summer, a group of biologists and Canadian Coast Guard members became the first people to report seeing endangered sei whales in Canadian waters in more than half a century.

"This was very exciting because we didn't expect it," said Thomas Doniol-Valcroze, a research biologist with the Department of Fisheries and Oceans.

"People on my team had never seen them."

The sei whale, one of the fastest marine mammals in the world, is part of the same family as blue and fin whales.

At one point, there were more than 60,000 sei whales in the North Pacific, but the population collapsed after whalers started targeting them. There hadn't been a single reported sighting of a sei whale in Canadian waters since before whaling was banned in the 1960s.

A 2006 Canadian report says there were two confirmed sightings of sei whales in Pacific waters off the west coast of the United States between 1991 and 2001 but none in Canada. They are listed as endangered in Canada's Species at Risk Act.

Doniol-Valcroze was on board the Coast Guard ship near the end of July. It used floating sonar devices to listen for whale calls under the water.

"Sei whales are so rare nobody is actually completely sure what they sound like here in the Northeast Pacific," he said.

The group saw five of the large creatures swimming amid a pod of fin whales and, using large binoculars, the teams determined they were sei whales.

The researchers were part of a 10-week survey trying to count, or estimate, all marine mammals populations in Canada's Pacific. The survey is the first of its kind in the Pacific ever conducted by the federal government, which has done similar surveys in the Atlantic and the Arctic.

The Raincoast Conservation Foundation in B.C. conducted a Pacific marine mammal survey in 2003 and their numbers have been used for the last 15 years.

The final results of the survey will not be published for a year, said Doniol-Valcroze, but he added it was quite successful. In addition to the sei whale sighting, the teams also found higher than anticipated numbers of harbour porpoises, he said.

The teams did not see enough sei whales to be able to say how many exactly are in the Pacific Ocean off the Canadian coast.