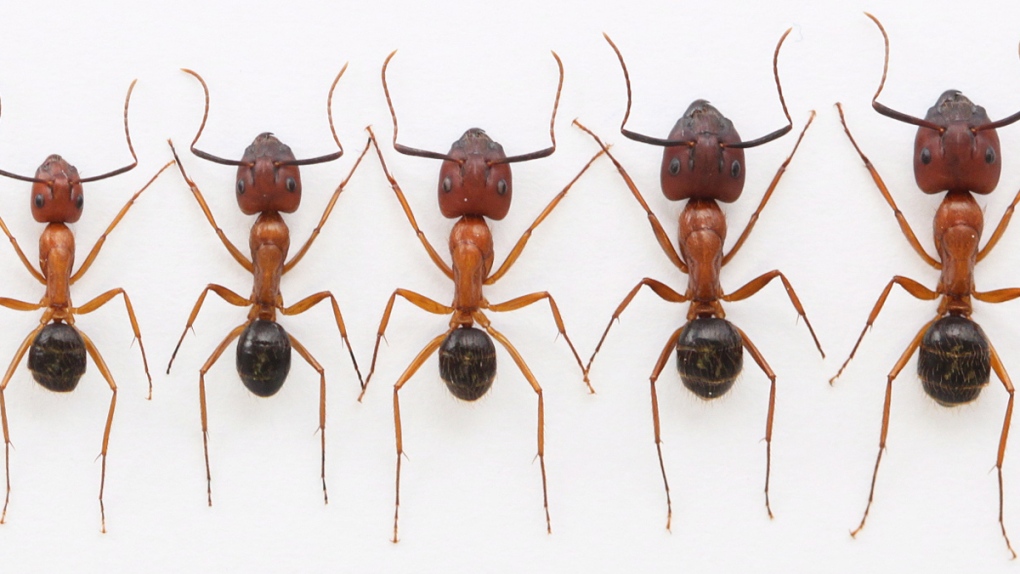 Illustration shows a portion of the range of sizes that researchers at McGill University were able to create in ants. (THE CANADIAN PRESS / Mélanie Couture and Dominic Ouellette)

MONTREAL -- Canadian scientists have managed to double the size of experimental ants by unlocking the mystery of how an animal's environment affects how big it grows.

Abouheif and his fellow researchers, including McGill geneticist Moshe Syzf, started by looking at ant colonies and asking: Why are some ants of the same species big and other ones small?

They headed out to ant colonies and gathered samples of the social insects. They found that their size seemed to depend on how much a single gene known as EGFR had been "coated" by a chemical process called methylation.

About 70 per cent of size differences between individual ants could be explained by how heavily methylated the gene was -- statistically, a highly convincing result.

The team then turned the process around. By manipulating the methylation of that one gene, they were able to grow ants that were twice as big or half the size of normal -- from 1.6 to 2.5 millimetres long.

"We used to think that traits like size that fall along a continuum were controlled by many, many, many genes, each having a small role, with the environment having a smoothing-out role," said Abouheif.

"What we've found is something quite fundamental -- by putting a coat on a single gene, you can generate that whole continuum in size.

"You get this chemical coating on the gene that modifies the way the gene works. You don't need any changes in the gene."

Because methylation is influenced by outside factors such as food, Abouheif and his colleagues have not only defined exactly how environment works to control characteristics such as size, they've quantified the strength of that influence.

"What the food is doing is affecting these chemical modifications. What we're showing is that genes and the environment are equal in their power to generate these continuous traits."

One of the compounds Abouheif used to alter the size of the ants was folate, a B vitamin which is found naturally in human diets.

The implications could be far-reaching. Many animals -- including humans -- have the EGFR gene, which works by triggering the actions of other genes. Methylation is also common across species.

The gene is also connected with the development of cancers.

"We think not only is (this discovery) important for science, but it's going to have an effect on cancer (research) as well."

Size isn't the only characteristic that occurs across a gradual range. Abouheif suspects such features as weight, strength, skin colour and even intelligence might be influenced by a similar chemical process.

"We've got to find out what other genes are involved, connect the dots between the food and the chemical modification. We have to see how this applies in other vertebrate systems ...

"It's just the beginning, really."