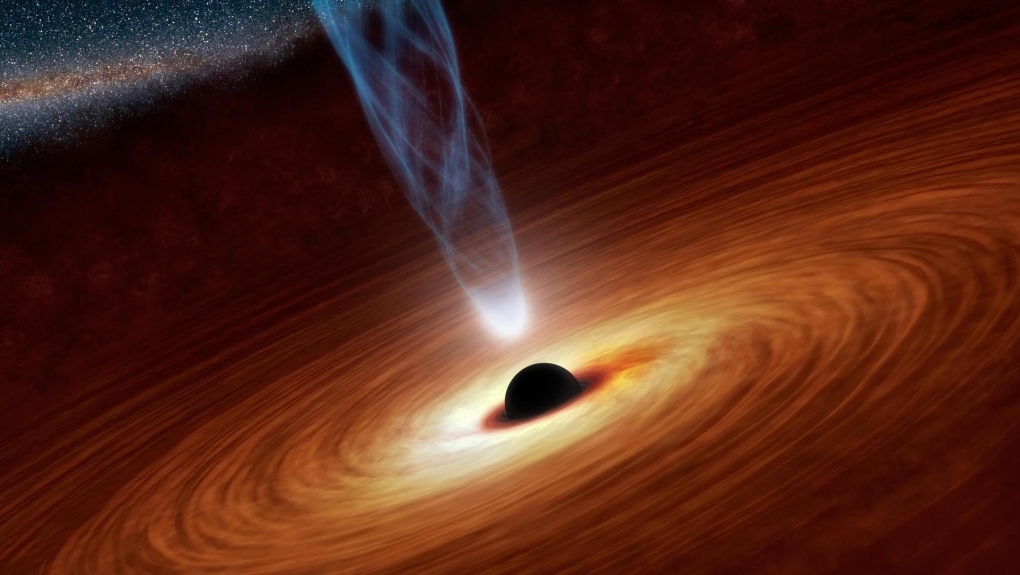 This artist's illustration shows a supermassive black hole. For the first time, scientists have been able to directly observe light bending from behind a black hole. (NASA/JPL-Caltech)

TORONTO -- For the first time, scientists have been able to directly observe light bending from behind a black hole.

It’s something that Albert Einstein predicted would be possible under his theory of relativity. But this is the first time the phenomenon has directly observed by scientists.

“Any light that goes into that black hole doesn’t come out, so we shouldn’t be able to see anything that’s behind the black hole,” said Stanford University astrophysicist Dan Wilkins, who made the observation, in a news release. “The reason we can see that is because that black hole is warping space, bending light and twisting magnetic fields around itself.”

Wilkins, along with his colleagues from the Netherlands and Canada, published their findings in the journal Nature on Thursday. They used NASA’s NuSTAR telescope and the European Space Angency’s XMM-Newton telescope to observe a black hole in centre of the galaxy I Zwicky 1, located 800 million light-years away.

Through the telescopes, Wilkins observed a bright X-ray flare that was shortly followed by smaller X-ray flashes that came in a smattering of different colours. The researchers concluded that the secondary smaller flashes of X-ray light had actually bent around from behind the black hole.

How is light able to bend around a black hole? Researchers say it has to do with “coronas.”

Because of the heat, these particles lose electrons and become magnetically charged while turning into plasma. But the strength of the black hole’s pull breaks the magnetic fields generated by the plasma particles, which causes X-ray flares to appear.

“This magnetic field getting tied up and then snapping close to the black hole heats everything around it and produces these high energy electrons that then go on to produce the X-rays,” Wilkins said.

“Fifty years ago, when astrophysicists started speculating about how the magnetic field might behave close to a black hole, they had no idea that one day we might have the techniques to observe this directly and see Einstein’s general theory of relativity in action,” said paper co-author and Stanford University particle physics professor Roger Blandford in the news release.

Researchers still aren’t exactly sure how the corona can produce bright X-ray flares. Their next step is to use an enhanced X-ray telescope from the European Space Agency in order to continue studying how coronas work.

“It’s got a much bigger mirror than we’ve ever had on an X-ray telescope and it’s going to let us get higher resolution looks in much shorter observation times,” said Wilkins. “So, the picture we are starting to get from the data at the moment is going to become much clearer with these new observatories.”