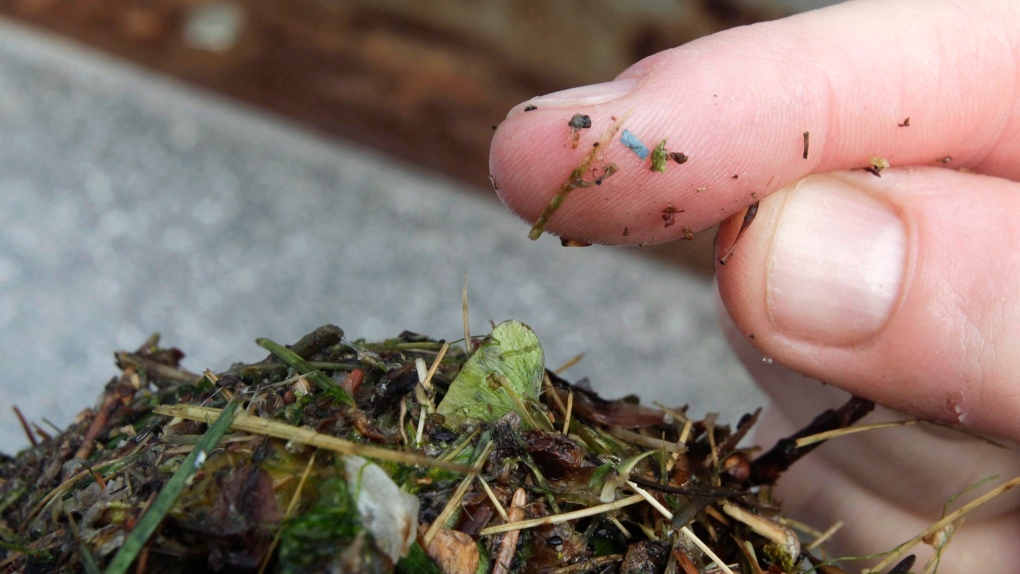 A blue rectangular piece of microplastic is visible on a researcher's finger on Wednesday, May 19, 2010 in Tacoma, Wash. New research suggests North Americans eat, drink and inhale tens of thousands of tiny plastic particles every year. THE CANADIAN PRESS/AP, Ted S. Warren

PORTLAND, ORE. -- Tiny bits of broken-down plastic smaller than a fraction of a grain of riceare turning up everywhere in oceans, from the water tothe guts of fish and the poop of sea otters and giant killer whales.

Yet little is known about the effects of these "microplastics" -- onsea creatures or humans.

"It's such a huge endeavour to know how bad it is," said Shawn Larson, curator of conservation research at the Seattle Aquarium. "We're just starting to get a finger on the pulse."

This week, a group of five-dozen microplastics researchers from major universities, government agencies, tribes, aquariums, environmental groups and even water sanitation districts across the U.S. West is gathering in Bremerton, Washington, to tackle the issue. The goal is to create a mathematical risk assessment for microplastic pollution in the region similar to predictions used to game out responses to major natural disasters such as earthquakes.

The largest of these plastic bits are 5 millimeters long, roughly the size of a kernel of corn, and many are much smallerand invisible to the naked eye.

They enter the environment in many ways. Some slough off of car tires and wash into streams -- and eventually the ocean -- during rainstorms. Others detach from fleeces and spandex clothing in washing machines and are mixed in with the soiled water that drains from the machine. Some come from abandoned fishing gear, and still more are the result of the eventual breakdown of the millions of straws, cups, water bottles, plastic bags and other single-use plastics thrown out each day.

Research into their potential impact on everything from tiny single-celled organisms to larger mammals like sea otters is just getting underway.

"This is an alarm bell that's going to ring loud and strong," said Stacey Harper, an associate professor at Oregon State University who helped organize the conference. "We're first going to prioritize who it is that we're concerned about protecting: what organisms, what endangered species, what regions. And that will help us hone in ... and determine the data we need to do a risk assessment."

A study published last year by Portland State University found an average of 11 micro-plastic pieces per oyster and nine per razor clam in the samples taken from the Oregon coast. Nearly all were from microfibers from fleece or other synthetic clothing or from abandoned fishing gear, said Elise Granek, study co-author.

Scientists at the San Francisco Estuary Institute found significant amounts of microplastic washing into the San Francisco Bay from storm runoff over a three-year sampling period that ended last year. Researchers believe the black, rubbery bits no bigger than a grain of sand are likely from car tires, said Rebecca Sutton, senior scientist at the institute. They will present their findings at the conference.

Those studying the phenomenon are worried about the health of creatures living in the ocean -- but also, possibly, the health of humans.

Some of the concern stems from an unusual twist unique to plastic pollution. Because plastic is made from fossil fuels and contains hydrocarbons, it attracts and absorbs other pollutants in the water, such as PCBs and pesticides, said Andrew Mason, the Pacific Northwest regional co-ordinator for the National Oceanic and Atmospheric Administration's marine debris program.

"There's a lot of research that still needs to be done, but these plastics have the ability to mine harmful chemicals that are in the environment. They can accumulate them," said Mason. "Everything, as it goes up toward the top, it just gets more and more and the umbrella gets wider. And who sits at the top of the food chain? We do. That's why these researchers are coming together, because this is a growing problem, and we need to understand those effects."

Researchers say bans on plastic bags, Styrofoam carry-out containers and single-use items like straws and plastic utensils will help when it comes to the tiniest plastic pollution. Some jurisdictions have also recently begun taking a closer look at the smaller plastic bits that have the scientific community so concerned.

California lawmakers in 2018 passed legislation that will ultimately require the state to adopt a method for testing for microplastics in drinking water and to perform that testing for four years, with the results reported to the public. The first key deadline for the law -- simply defining what qualifies as a micro-plastic -- is July 1.

And federal lawmakers, including Sen. Jeff Merkley, an Oregon Democrat, and Sen. Lindsey Graham, a South Carolina Republican, last week introduced bipartisan legislation to establish a pilot research program at the U.S. Environmental Protection Agency to study how to curb the "crisis" of microplastic pollution.

Larson, the conservationist at the Seattle Aquarium, said a year of studies at her institution found 200 to 300 microfibers in each 100-litre sample of seawater the aquarium sucks in from the Puget Sound for its exhibits. Larson, who is chairing a session at Wednesday's consortium, said those results are alarming.

"It's being able to take that information and turn it into policy and say, `Hey, 50 years ago we put everything in paper bags and wax and glass bottles. Why can't we do that again?"' she said.