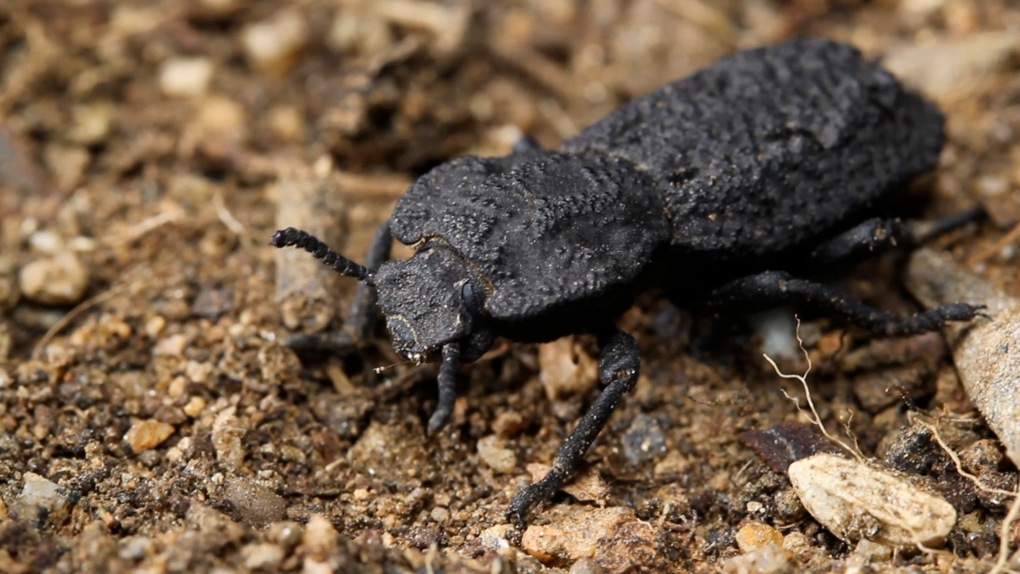 This 2016 photo provided by the University of California, Irvine, shows a diabolical ironclad beetle, which can withstand being crushed by forces almost 40,000 times its body weight and are native to desert habitats in Southern California. Scientists say the armor of the seemingly indestructible beetle could offer clues for designing stronger planes and buildings. In a study published Wednesday, Oct. 21, 2020, in the journal Nature, a group of scientists explains why the beetle is so squash-resistant. (Jesus Rivera, Kisailus Biomimetics and Nanostructured Materials Lab, University of California Irvine via AP)

PARIS, FRANCE -- Looking like it was forged in apocalyptic fires, the diabolical ironclad beetle has a formidable reputation for being able to withstand being stabbed or run over by a car.

Now scientists have found a jigsaw-like mechanism in their exoskeletons that helps the little creature tolerate forces up to 39,000 times its own body weight.

Their discovery could have implications for engineering and robotics, experts say, and even challenge the position of cockroaches as models of insect indestructibility.

The beetle, which no longer has its ancestors' ability to fly away from predators, has developed crush-resistant exoskeletal forewings -- called elytra -- as a form of protection, according to the new study published in the journal Nature.

The beetle, which is roughly two centimetres (just under an inch) long, is an oak-dwelling fungivore primarily residing on the western coast of North America.

In spite of its ferocious name, it tends to scuttle into a hiding place or play dead when attacked, helped by its rough textured, craggy black body that gives it the appearance of a small rock.

"Beyond feigning death, this beetle has a remarkable ability to withstand crushing and piercing strikes from predators, and even the occasional automobile," the study said.

It said they are so tough that entomologists often bend the steel pins they use when they try to mount the beetles in display cases.

Scientists from the United States and Japan looked at the structure of the beetle's elytra, which allow it to withstand forces of up to 149 newtons -- approximately 39,000 times its body weight.

They found was significantly more than other similar beetles could tolerate.

Using advanced imaging techniques, the researchers saw that the beetle has a series of interlocked jigsaw-shaped joints in its elytra and found that the shape of these blades and their laminated microstructure acted to toughen the exoskeleton.

They concluded that the strong yet flexible structure allows the beetles to hide under rocks or contort themselves into tight spaces in tree bark for shelter, bearing extra weight without damaging their internal organs.

The researchers then used 3D printing and simulations to investigate whether this geometric structure could be used as a mechanical fastener for joining different materials -- such as plastics and metal -- similar to that required in turbines in the aerospace industry.

Po-Yu Chen, in the Department of Materials Science and Engineering at Taiwan's National Tsing Hua University, said the weight the insect was able to withstand was roughly 10 times higher than the biting forces generated by potential predators.

"Cockroaches have a similar shape-changing ability, which has inspired the design of a compressible robot that can squeeze into, and move within, tight spaces. Such robots could be used to search for survivors in collapsed buildings after disasters," he said in a commentary in Nature.

Po-Yu Chen, who was not connected to the research, said more research was needed into the structure's potential engineering uses, but said  the diabolical ironclad beetle "might now inspire new designs for compressible robots, or for armoured vehicles".

"And the authors' work demonstrates that you should never underestimate the capabilities of insects," he added.