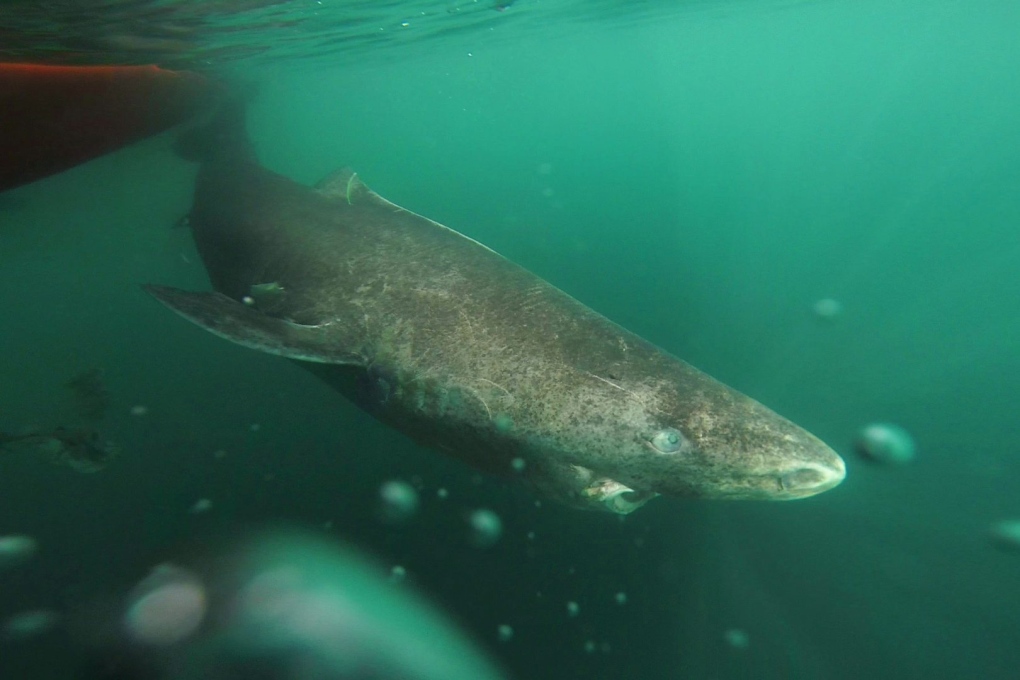 This undated photo made available by Julius Nielsen on Aug. 11, 2016 shows a Greenland shark slowly swimming away from a boat, returning to the deep and cold waters of the Uummannaq Fjord in northwestern Greenland during a tag-and-release program in Norway and Greenland.

WASHINGTON -- In the cold waters of the Arctic, a denizen of the deep lurked for centuries. Now scientists calculate that this female Greenland shark was the Earth's oldest living animal with a backbone.

They estimated that the grey shark, part of the species named after Greenland, was born in the icy waters roughly 400 years ago, and died only recently. That conclusion puts the entire species at the top of the longevity list.

Using a novel dating technique, an international team of biologists and physicists estimated the age of 28 dead female Greenland sharks based on tissue in their eyes. Eight of the sharks were probably 200 years or older and two likely date back more than three centuries, according to a study published Thursday in the journal Science.

Until now, that record holder was a bowhead whale that hit 211 years old, according to study lead author Julius Nielsen and AnAge, an animal longevity database .

The oldest of the Greenland sharks examined was nearly 16.5 feet long (5 metres) and estimated to be 392 years old when it was caught around four years ago. But that calculation comes with a huge margin of error -- plus or minus 120 years -- due to the newness of the dating technique, said Nielsen, a marine biologist at the University of Copenhagen.

That means the shark was probably born sometime between 1500 and 1740 with the most likely birth year 1620.

"It's an estimate. It's not a determination," Nielsen said. "It is the best we can do."

Even at the lowest end of the margin error, the shark would have been 272 years old when it died, and still would be the longest-living animal with a backbone, Nielsen said. Other experts agreed.

Joao Pedro Magalhaes, a University of Liverpool aging researcher, said because the study is based on an indirect measurement he wouldn't necessarily concentrate on exact numbers, especially when they exceed 400 years, where the upper end of the margin of error goes.

"But the study is convincing enough for us to say that these animals live way longer than human beings and possibly longer than any other vertebrate," said Magalhaes, who runs the longevity database and wasn't part of Nielsen's team.

Some animals without backbones live longer. An ocean quahog, a clam, lived 507 years and two different types of sponges are said to survive for 15,000 and 1,500 years.

While not surprised that Greenland sharks live a long time, "I'm really shocked by the magnitude of that longevity," wrote Christopher Lowe, director of the shark lab at California State University Long Beach. He wasn't part of the study, but praised it as creative and compelling.

Greenland sharks love cold water -- preferring temperatures near freezing -- and are all over the Arctic. The cold water and the slow metabolism that comes with it might have something to do with their long lives, Nielsen said. Lowe, in an email, said "the rule of thumb is deep and cold

old when it comes to fishes."

"I don't know why they get as old, but I hope someone will find out," Nielsen said.

For the age estimates, he uses a complex and indirect system that combines chemical tracking, mathematical modeling and growth measurements. He focuses on the shark eye lens. Those form while the shark is still developing inside the mother's uterus and measures of carbon in them won't change after birth, so it gives a good, rough sense of when the shark was born.

National Oceanic and Atmospheric Administration shark expert Allen Andrews said the dating method "is novel and is likely robust" but he said there are still a number of uncertainties.