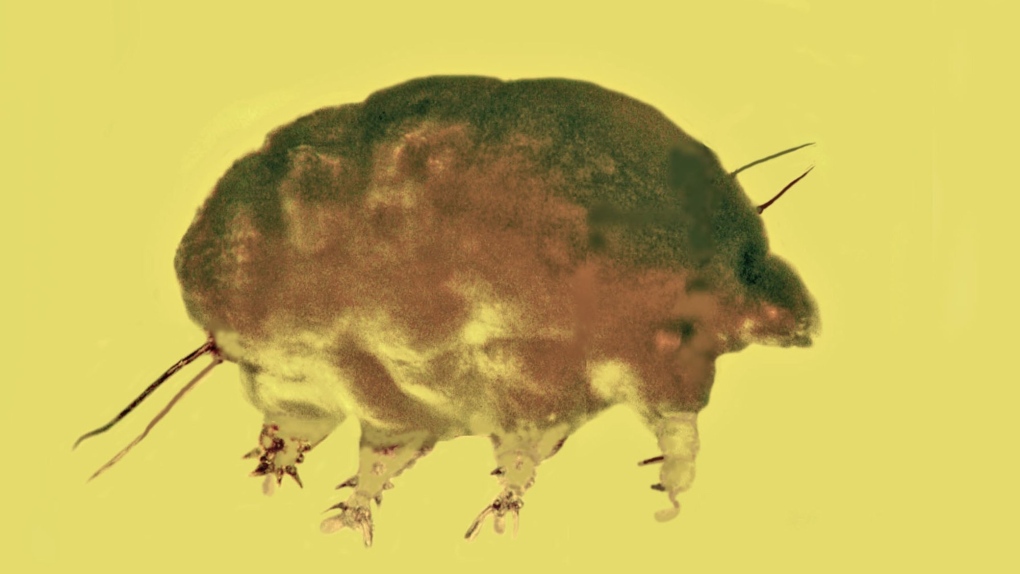 Tiny fossils trapped in amber have revealed a previously unknown creature that lived 30 million years ago that scientists are calling the "mold pig." (George Poinar Jr.)

Tiny fossils trapped in amber have revealed a previously unknown creature that lived 30 million years ago that scientists are calling the "mold pig." Researchers say the fossil suggests a new family, genus and species of microinvertebrates that lived during the mid-Tertiary period.

The mold pig, well, looked like a microscopic pig and munched on fungus, which is how researchers named it. But technically, the name for the new creature is Sialomorpha dominicana, including Greek words for fat, "sialos," and shape, "morphe." It was found in Dominican amber.

George Poinar Jr. pieces together clues about animal and plant life in the past by studying specimens trapped in amber at the Oregon State University College of Science. His study about mold pigs published Tuesday in the journal Invertebrate Biology.

The mold pigs were 100 micrometers long with four pairs of legs and flexible heads. In order to grow, they would shed their exoskeleton.

"Every now and then we'll find small, fragile, previously unknown fossil invertebrates in specialized habitats," Poinar said. "And occasionally, as in the present case, a fragment of the original habitat from millions of years ago is preserved too."

These tiny invertebrates look like water bears, or tardigrades, but they're two different creatures.

Water bears are tiny, pudgy animals no longer than one millimeter. Tardigrades, which live in water or in the film of water on plants like lichen or moss, can be found all over the world in some of the most extreme environments, from icy mountains and polar regions to the balmy equator and the depths of the sea.

They have eight legs with claws at the end, a brain and central nervous system, and something sucker-like called a pharynx behind their mouth that can pierce food. And they could outlive us by 10 billion years, according to a 2017 study from Oxford University.

"The mold pigs can't be placed in any group of currently existing invertebrates -- they share characteristics with both tardigrades, sometimes referred to as water bears or moss pigs, and mites but clearly belong to neither group," Poinar said.

Invertebrates comprise about 95% of animal species, according to the study.

The amber included several hundred fossils of the mold pigs, as well as their food source and other invertebrates. They would have lived in a warm, moist environment alongside nematodes, protozoa, fungi and pseudoscorpions.

"The large number of fossils provided additional evidence of their biology, including reproductive behavior, developmental stages and food," Poinar said. "There is no extant group that these fossils fit into, and we have no knowledge of any of their descendants living today. This discovery shows that unique lineages were surviving in the mid-Tertiary."

In order to survive, they likely fed on other small invertebrates as well. And unlike mites and tardigrades, they had no claws. Tardigrades have survived to this day, but until the researchers learn more, it's difficult to say what descended from the mold pigs.

"Based on what we know about extant and extinct microinvertebrates, S. dominicana appears to represent a new phylum," Poinar said.

"The structure and developmental patterns of these fossils illustrate a time period when certain traits appeared among these types of animals. But we don't know when the Sialomorpha lineage originated, how long it lasted, or whether there are descendants living today."