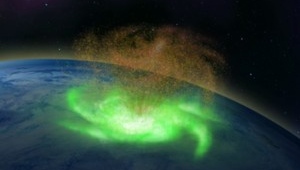 TORONTO -- Hurricanes are a common occurrence on Earth, they wreak havoc across oceans seasonally, and now they may cause chaos in the skies too.

Satellites captured the images of the space hurricane back in 2014, but scientists only discovered them during a recent retrospective analysis of data taken from satellites and radars.

The analysis, completed by scientists at University of Reading led by Shandong University in China, allowed for a 3D model to be made of the hurricane.

The 3D image shows a 1,000 km-wide hurricane hundreds of kilometres above the North Pole, a press release said. Similar to the hurricanes in the lower atmosphere of Earth, the space hurricane rained, but the rain was electrons, according to the study.

This is the first time an upper atmosphere hurricane has been detected.

“Until now, it was uncertain that space plasma hurricanes even existed, so to prove this with such a striking observation is incredible,” Professor Mike Lockwood, space scientist at the University of Reading, said in a statement.

What’s more, this is likely not a one-off occurrence.

“Plasma and magnetic fields in the atmosphere of planets exist throughout the universe, so the findings suggest space hurricanes should be a widespread phenomena,” Lockwood continued.

According to the press release, the hurricane was observed to be moving in a counter-clockwise direction and lasted nearly eight hours before dissipating.

The researchers believe these space hurricanes could be common occurrences in our solar system as the one documented in the study was observed when geomagnetic activity, variations in the magnetic field around Earth, was low, according to the study. One form of geomagnetic activity is the aurora borealis, or northern lights.